Michael Phelps to Give Desert Interview 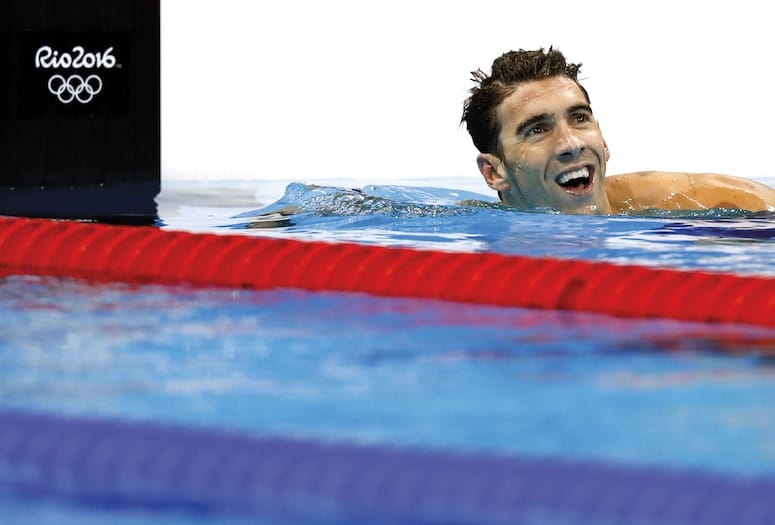 There are storybook endings, and then there is Michael Phelps’ grand Olympic finale last summer in Rio.

Movie stars, athletes, politicians, even file clerks want to go out on their own terms. Phelps is no exception. He did it his way.

He is, of course, the most decorated athlete in the history of the Olympic Games, once deemed “the greatest racer who ever walked the planet.” That designation was given by a pretty decent swimmer himself, Mark Spitz. “Mark the Shark,” as he was known in his day, was formerly the most decorated swimmer in history, having won seven gold medals in the 1972 Olympics. It was a feat no one ever thought could be surpassed. Phelps upped him by one in 2008 in Beijing. In four Olympic seasons, Phelps won 28 medals — 23 of them gold. In total, he earned 16 medals, 13 of them gold, in individual, non-relay events. He is to swimming what Babe Ruth was to baseball, what Jack Nicklaus was to golf.

Coachella Valley residents have a chance to hear about his career firsthand.

On March 3 at the Hyatt Regency Indian Wells Resort & Spa, Phelps will be the special guest at the Barbara Sinatra Children’s Center Annual Champion Honors Luncheon. He will be interviewed at the event, a commitment he says he made because of the Sinatra Foundation’s long-standing work with abused children.

“My team brought this to me,” Phelps says. “And I saw right away that it was a no-brainer. I saw the work they do, and have done for 30 years, and I was in.”

Phelps has his own foundation and it, too, centers on children. It stresses water safety for children. The program is called IM. No, it doesn’t stand for individual medley. Its motto is: IM water safe. IM healthy and active. It started nine years ago, when Phelps took the whopping $1 million bonus he received from sponsor Speedo for winning eight gold medals at the Beijing Olympics and used it to open the Michael Phelps Foundation.

To date, the foundation has served 16,000 children, as the Sinatra Foundation has served 22,000, and Phelps, just five months removed from his heroics in Rio, is an ambassador for his and other children’s causes. He says he is the happiest he has been in a long time. He is married to Nicole Johnson, Miss California 2010, and they have an 8-month-old son, Boomer Robert. 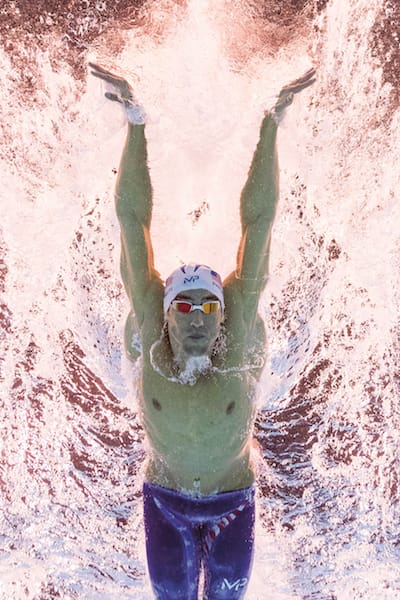 PHOTO BY FRANCOIS-XAVIER MARIT/AFP/GETTY IMAGES
Through the Michael Phelps Foundation, the Olympian shares his love of swimming with children and seeks to promote water safety and active lives.

“Just to see him splashing around in a pool and love being there,” Phelps says, “it kind of symbolizes what I want for all kids.”

Much of what Michael Phelps is today is the result of a recent evolution. He admits to being so focused on winning and records that he could see little else. For so long, his image was that of a man in a hoodie, shutting out the rest of the world with headphones and straight-ahead stares.

“I’d look at people, even other swimmers,” he says, “and they’d look away, like they were afraid to talk to me. I asked Nicole about it and she said, ‘Well, you can be pretty intimidating.’ ”

By the end of 2012 and yet another stunning Olympic performance, Phelps was an unhappy hero, a man for whom medals wrapped around his neck in dozens of posed photos could not conjure up contentment. His closing statements in London dealt not so much with accolades as with relief, an almost angry relief.

There was no mistaking the edge. Joy over wins and medals was mixed with anger that he wasn’t having fun, that he was doing this for all the wrong reasons, that he was ground down, that all those laps and all that pressure and all the years of expectations had hollowed him out as a person. He smiled broadly on the London medal stands. Now, he says, “I faked it pretty good, didn’t I?”

But “retired,” “finished,” “done” turned into one more Olympic run, a joyous competitive bossa nova at the Rio Olympics that he now enjoys talking about and certainly will at the Sinatra charity event.

“I loved it,” he says. “I came back on my terms. I did everything the way I wanted to.

“I felt like I was a kid again. There were lots of young kids on the U.S. swim team, a bunch of rookies, and I felt like a dad. That’s when I saw how people around me had viewed me and when Nicole told me I could be intimidating. So I talked to everybody. I was part of a team and I liked that.

“Nicole was there, and Boomer, and it just felt good to be a family man.”

“I’d look at people,  even other swimmers,  and they’d look away,  like they were  afraid to talk to me.  I asked Nicole  about it and she said,   ‘Well, you can be  pretty intimidating.’ ”

“I talked to Ray just about every day by phone during the Rio Olympics,” Phelps says. “We talked about how he felt during some of the last drives when they won the 2013 Super Bowl. He told me to enjoy that last drive, my last drive. I truly did. I realized that, this time, I didn’t have a what-if. In the 100 butterfly [which earned a silver medal, his only non-gold] I remember having this feeling that this is it and that it might end with a gold medal, or it might end however it is supposed to end. And that was OK.”

Now, Phelps is first and foremost a family man. He is practicing what his foundation preaches by making sure his son, Boomer, is around water and learns to love it and navigate it safely. “It’s fun, just watching him splash and sitting around, singing kids’ stuff with him: ‘The wheels on the bus go round and round…’ ”

He brought things full circle by asking the woman who taught him how to swim to start doing the same for Boomer. Cathy Bennett is the director of Michael Phelps Swimming. “Cathy has sat with Boomer in the pool three times,” Phelps says. “Twice at home in Baltimore.”

Phelps is not only a family man. These days, he’s also a traveling man. When the foundation needs him, he goes. When events such as Sinatra’s ask, he accepts. He says he’s not swimming much anymore, but is still in the pool two days a week. When he goes on the road, he takes a swimsuit along.

Now, cue the wonderful fantasy scenario of Phelps climbing into the water at a Holiday Inn in Amarillo or Indianapolis for a couple of relaxing laps. Joe, a young and in-shape traveling salesman, seeing a new guy in the pool with a pretty decent stroke, thinks he might have some fun with the old-timer. So he paddles over and offers: