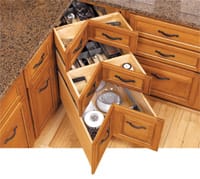 Kevin D. Smith likes to entertain. He and his wife host guests as least once a week. He knows where everything is in his kitchen, from the spices to the sauté pans. He wastes no time fumbling through a drawer crowded with cooking utensils; they’re all separated according to how they’re used. For Smith, this kind of organization comes with the territory: He’s a certified kitchen designer and president of Palm Springs Kitchen & Bath in Thousand Palms.

Smith and his colleagues work with clients who regularly voice concerns over kitchen organization. It’s not for a lack of space; rather, it’s about everything being in its place. “In a word, access is the main thing,” Smith says. “These days, storage is more accessible. It used to be a drawer and a lazy Susan, and now it’s pullout pantries and custom corner drawers.” Even the most sophisticated kitchens, regardless of how often they’re used, should be functional. (Think resale value.)

The biggest movement in kitchen storage and organization is with pantries. “Pantries are still No. 1 as far as storage of consumables,” Smith says. What has changed, however, is how the space is used. Smith is building more pantries that have a pullout base cabinet, which means accessibility of items from above and either side. Spice racks are also common on the inside of the pantry doors. Another clever storage solution in the kitchen is a corner pullout drawer, which comes out at a diagonal and makes the most of angles created by countertops.

Kitchen designers have also enhanced the work triangle — which is the space that connects the cooktop, refrigerator, and sink — by adding zones for preparation, cooking, and cleanup. “The purpose of the zone concept is to divide the different tasks of a kitchen,” Smith says. “Instead of looking at a kitchen as a whole and just trying to stick something where we think it’s best, we categorize like items for like tasks.” For example, the cooking zone would obviously be near the range, but within that space would be large, deep drawers underneath the cooktop for pots and pans (and even dividers for their respective lids) and drawers with culinary tool dividers or spice compartments.

The kitchen island — that epitome of functionality — also has gotten a facelift. Once nothing more than additional counter space, high-end kitchen islands now feature sinks with garbage disposals, custom-made cabinetry, hidden storage compartments, a second dishwasher, wine racks, and beverage refrigerators. In addition, islands are built with multiple heights, which accommodate both the cook and the guests.

Good kitchen organization has many benefits, particularly for those who entertain in their homes. If you like to host parties, you know how critical an organized kitchen is — despite your best attempts, it’s usually where the crowd ends up.  “When you entertain … you’re almost on stage,” Smith says. “You need to be prepared. You need to have everything in its place in order to be organized and hospitable without looking, searching, and being frustrated while dealing with a date or in-laws. I think [organization] is critical … for you to enjoy yourself. The last thing you want is to be frustrated with your kitchen.”