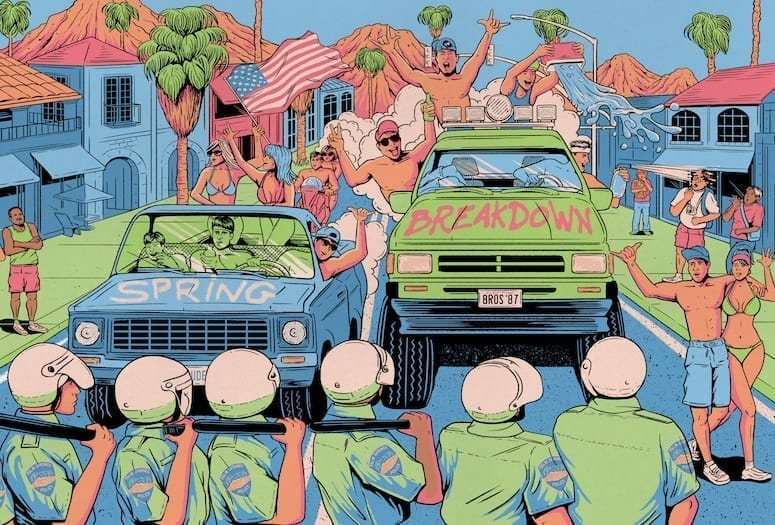 Spring Break 1986 started like so many before it — with thousands of college kids converging on Palm Springs from all over the West. Freed from their studies, winter coats, and parents, they came with one thing in mind: to have a vacation they would remember for the rest of their lives. For some, that meant days of excessive drinking; for others, the possibility of a brief holiday romance; and for a surprising number, the opportunity to act on more primal urges. Whichever camp they fell into, it’s safe to say that everyone who was there on Saturday, March 29, got their wish: a Spring Break they would never forget.

Palm Canyon Drive was packed that afternoon with big-haired coeds in Day-Glo bikinis and bare-chested frat boys in Ray Bans vying for their attention. Thirty-five police officers assigned to patrol downtown Palm Springs looked on as revelers crowded the sidewalks and watched the parade of cruising vehicles slow traffic to a crawl, their radios blasting “Rock Me Amadeus” and Whitney Houston’s “How Will I Know?” In what had become a Spring Break tradition, they tried to beat the near-90–degree temperature by squirting each other and passing motorists with water guns or tossing water balloons at unsuspecting pedestrians — harmless antics of simpler times, like those immortalized in movies like Palm Springs Weekend. With its tag line, “That once-a-year vacation fling when American youth goes wild and takes over America’s swankiest playground,” the film epitomized the tribal rites of Spring Break — sex, sunshine, and alcohol — and solidified Palm Springs’ reputation as the home of one of the nation’s wildest bacchanalia.

• VIDEO: View this 1986 video of spring break in Palm Springs.

Spring Break wasn’t always the raucous affair of college kids’ fantasies. In the beginning, it didn’t even occur in spring. It started in 1935 when Colgate University’s swim coach, fretting that his team would be out of shape by the time the Christmas and New Year’s break was over, acted on the suggestion of an athlete’s father to have the team train at a pool near his home in Fort Lauderdale, Florida. Soon, swim teams from all over the country were heading south for the holidays. Like remora fish attaching themselves to the swimmers, young people piled into cars and drove, sometimes around the clock, to spend the holidays on the beach. Eventually, swimming took a back seat to partying and the gathering slowly migrated to coincide with Easter vacation and was dubbed Spring Break. 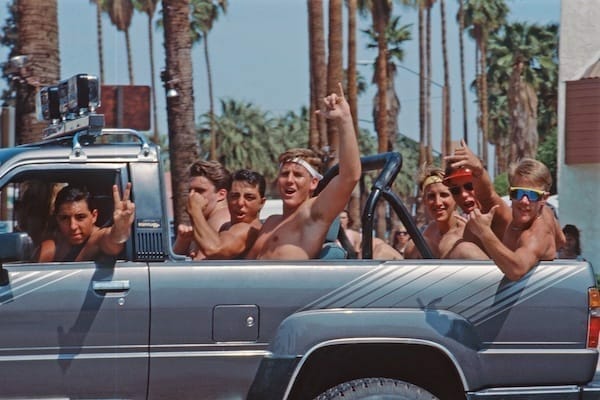 PHOTOGRAPH COURTESY PALM SPRINGS LIFE ARCHIVES
Party-loving spring breakers took over Palm Springs and made it a go-to destination — until the revelry grew into a riot that tarnished the city’s star-studded shine.

While Fort Lauderdale–bound revelers had the Atlantic Ocean, the libidinous college kids who crammed into Palm Springs (sometimes 10 to a room) had to settle for swimming pools. The sight of drunken boys jumping off hotel roofs and terraces into the pools or tossing patio furniture into the water didn’t sit well with hoteliers, who put security measures into place including color-coded wristbands for hotel guests.

Trespassers who were turned away often sought revenge by tagging hotel façades with graffiti, urinating on carpeting, or punching holes in restroom walls. With only balloons and spray bottles filled with water to keep cool, they crowded the corner of Palm Canyon Drive and Alejo Road, where a seemingly endless flow of cruisers tied up traffic.

Things took an ominous turn when partiers, spurred by anonymity not afforded them at home, replaced those squirt guns and balloons with coolers and buckets capable of dousing cars with gallons of water. Like a scene out of Animal House, the crowd charged into the streets. With the intersection essentially shut down, students surrounded vehicles, targeting convertibles and open sun roofs, soaking the occupants and sometimes damaging the interiors. When the water ran out, they began violently rocking the cars, trying to pry open windows, terrifying drivers and passengers. At one point, no less than 40 men surrounded a white stretch limousine as it inched through the ruckus. One of them jumped on its hood, and with the crowd cheering him on, he dropped his shorts, flashing the passengers inside. With tremendous amounts of youthful energy pulsing through the crowd, one young woman, egged on by the hoard’s chanting, bared her breasts. Many say that was the catalyst for what happened next. 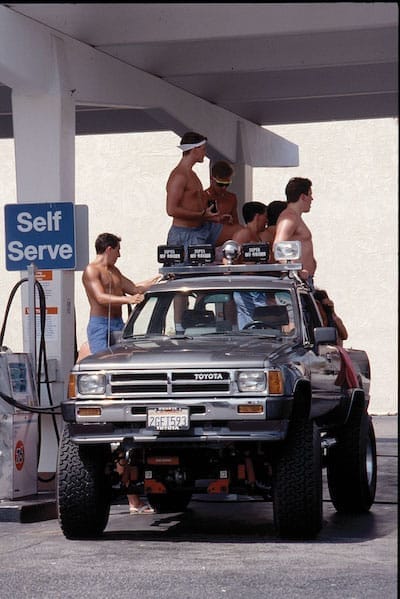 Men jumped into the beds of pick-up trucks where coeds rode like homecoming queens and began tearing at their bikini tops and shorts. One woman was sexually assaulted by an assailant who digitally penetrated her, a form of rape.

When word came that a group of troublemakers was dousing police officers with ice chests full of water, the sergeants in charge (lacking manpower for riot control or enough of a situation to warrant calling in support from nearby cities) found themselves in an untenable situation. With the remaining force patrolling the rest of the city, the cops on Palm Canyon Drive waited almost 45 minutes for off-duty officers to arrive

When backup finally came, they split into two teams: one on the east side of Palm Canyon, the other on the west side. Wearing helmets, face shields, and vests, they formed a straight line across the road, followed by a police car announcing that the crowd was engaged in unlawful assembly, and ordered them to clear the street or risk arrest. Before long, bottles and rocks were hurled and amid the free-for-all. A bottle hit officer Bill Williams in the head and knocked him out.

The police line slowly advanced south toward Ramon Road, making numerous arrests along the way. At Baristo Road, they encountered approximately 100 rioters, many of them so intoxicated they couldn’t get out of their own way. Instead, they challenged the officers, hurling obscenities and objects at them. One defiant and shirtless punk did one-armed push-ups in front of the forward-moving police.

Rather than fight, risking injury to the crowd and themselves, the police detonated smoke bombs, hoping the throng would mistake it for tear gas and scatter. Smoke doesn’t get filtered out, so the officers refrained from wearing their gas masks. One rioter overheard the police discussing their strategy, and when the bombs weredispersed, he shouted “It’s only smoke, stand your ground!” With their plan foiled, one sergeant acted unilaterally. Soon, the smell of suntan lotion was replaced with the smell of tear gas. Without their masks, the police, like the protestors, gasped for breath. When the air finally cleared, so had the crowd. 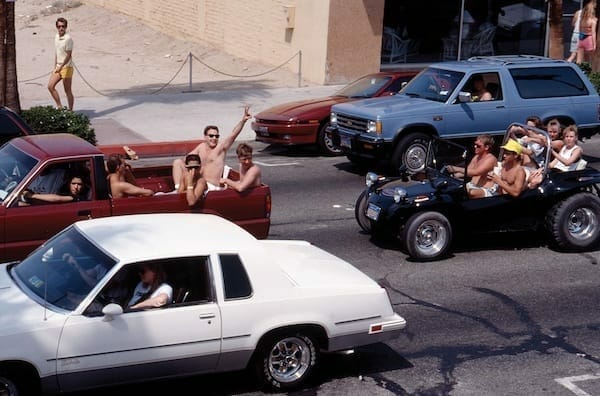 Amid the littered streets and damaged property, Mayor Frank Bogert vowed it would never happen again, promising to quadruple the number of police on the streets during the following year’s Spring Break, when 4,500 citations were issued in a 10-day period

But it wasn’t until 1988 that Spring Breakers met their Darth Vader: Sonny Bono.

PHOTOGRAPH BY @DESERT SUN - USA TODAY NETWORK
Best known as half of the popular duo Sonny & Cher, whose hits included “I Got You Babe” and “The Beat Goes On,” the once bobcat vest-wearing Bono epitomized 1960s counterculture before he, like the former Jedi Knight, was seduced by the dark side (in this case, the establishment). After leaving Hollywood, he became a restauranteur, opening the eponymous Bono’s on Indian Canyon Drive.

To grow business, he hung a large sign over the entrance. Told that he couldn’t because the eatery was in a residential zone, he became frustrated with the city, which, he said, “was a good concept in need of a rewrite.” In a classic example of “I alone can fix it,” he ran for mayor in 1988. When his opponents accused him of using the campaign to reignite his music career, Bono cited Clint Eastwood (who had successfully run for mayor of Carmel, California) as a star that had successfully transitioned to politics. Commenting on the comparison, Bogert said, “Comparing Bono to Eastwood is like comparing chicken shit to chicken salad.”

Despite having a new restaurant and a new wife (his fourth, Mary Whitaker), living in the shadow of his entertainment career and more-successful ex-wife weighed heavily on him and heightened the importance of his campaign. To the surprise of many, he won in a landslide. 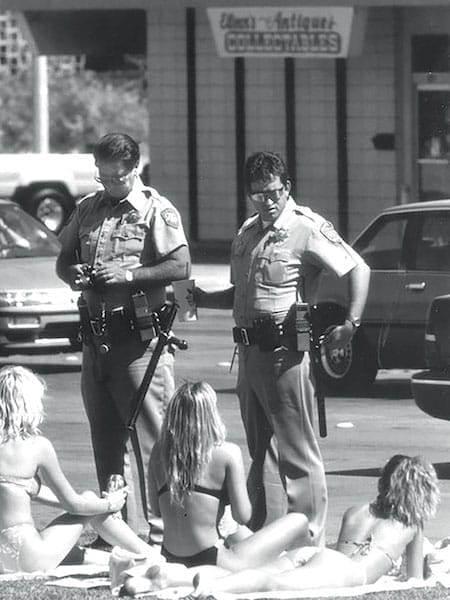 In the wake of the ’86 riot, the city outlawed skimpy bikinis in an effort to send spring breakers elsewhere.

At his swearing-in ceremony, when asked what he hoped to achieve during his four-year term, the color drained from his face. “Four years? I thought it was two.” His staff recalls that he wasn’t detail oriented and actually requested that his meetings be scripted. Lacking the fundamental understanding of the limits of his power, he tried to fire a publicly elected city councilwoman and earned the nickname Sonny Bonaparte when he axed three members of the tourism board.

There were times when he was razor-focused, like in his crusade against Spring Break, which he called “a nightmare.” That intensified when an analysis revealed that hotel occupancy rates actually decreased during it. Claiming it cost the cityapproximately $500,000 in extra police, damages to property, and lost hotel taxes, he declared war on it. Over the next couple of years, he assembled a citizen’s task force and urged the city council to adopt a slate of new ordinances that became known as “Bono’s No No’s.”

Water balloons and squirt guns were banned. If you stepped into the street, it had to be in a crosswalk. And, because girls riding on the back of motorcycles in string bikinis were a distraction that caused a car accident, described by one officer as “a rear end that caused a rear-ender,” both string bikinis and motorcycles were barred from Palm Canyon Drive (even though Bono was often seen patrolling it on his Harley-Davidson).

A surcharge of $15, aptly known as “Bono Bucks,” was added to all citations issued during Spring Break. If you were arrested on more serious charges, your parents couldn’t just wire money; they had to come to bail you out. 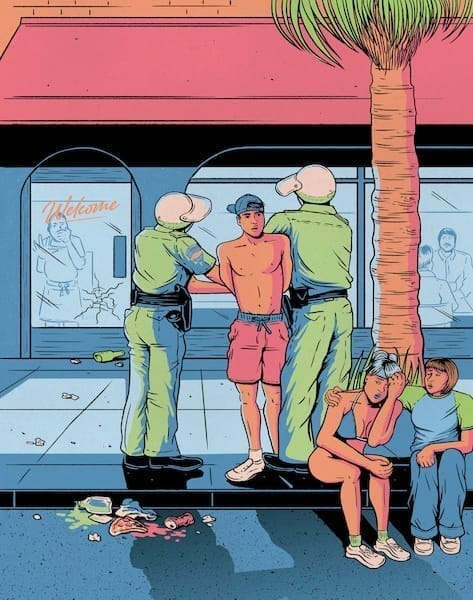 In order to deter cruisers, 200 concrete barriers blocked sections of Palm Canyon and Indian Canyon. If that wasn’t enough to dissuade them, after years of discussion, Highway 111 was rerouted from Palm Canyon to Vista Chino and Gene Autry Trail, allowing the city to close its main street without state approval.

Many believe that these changes diminished the town’s appeal and contributed to the exodus of residents and retailers to other desert cities. Some think the city was shortsighted and failed to consider the future financial contributions Spring Breakers could make. It wasn’t just about the money they spent as kids; it was the money they would spend as adults when, driven by fond memories, they return with deeper pockets. 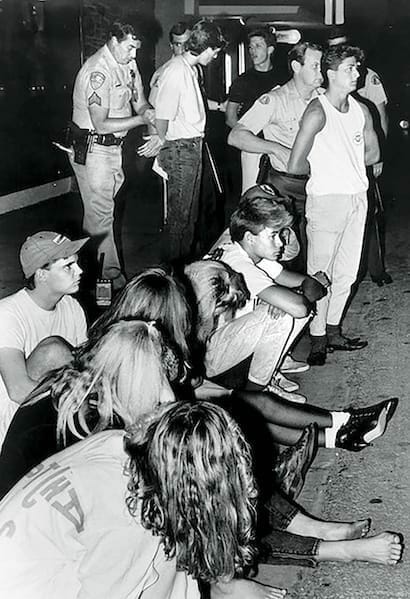 Bono focused on the present and envisioned a family-friendly replacement for Spring Break: Desert Harvest Days and Wildflower Festival. Behind his back, it was called the Festival of Fruits and Nuts. With bales of hay adorning the streets, the festival didn’t attract crowds, but it did turn off Spring Breakers, who fled to Lake Havasu, Arizona, and Cabo San Lucas in Mexico.

Like a fickle lover, during the recession of 2008, the tourism bureau attempted to re-engage students and sent out 55,000 emails urging them to “Skip Cabo, come to Palm Springs.” But the die had been cast: Spring Breakers had moved on.

More than a quarter of a century after the 1986 uprising, young people still visit Palm Springs, but in a world of internet dating, Airbnb, Splash House, Stagecoach, and Coachella, Spring Break, with its cruising up and down Palm Canyon Drive and getting squirted with water guns seems like an antiquated curiosity — not unlike Sonny Bono himself.