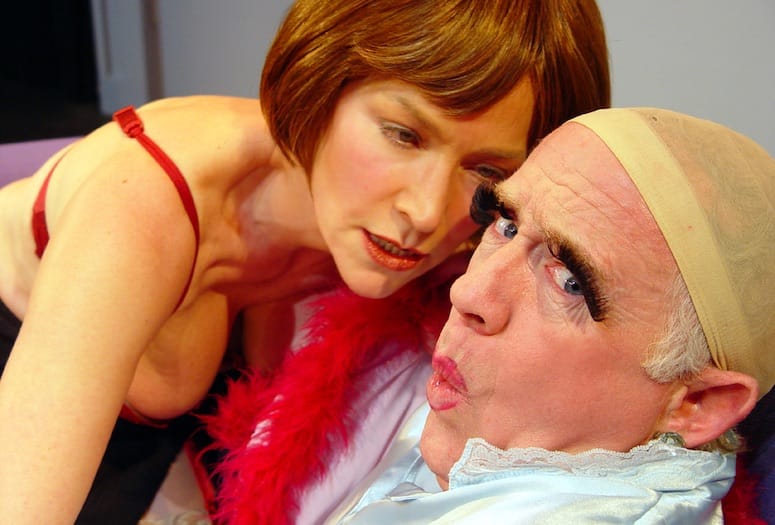 Leslie Jordan will reprise his role as Brother Boy in the virtual reading of the play, Sordid Lives, on May 31.
PHOTOGRAPHS COURTESY DEL SHORES FOUNDATION

It wasn’t until they were able to reflect on the longevity of their artistic partnership that Del Shores and Emerson Collins discovered what kind of milestone it actually is.

“My work husband has worked out real well,” jokes Collins.

“I didn’t realize that Emerson. We’ve been together longer than either of my husbands or my wife,” Shores cracks.

Over a course of 15 years, Shores and Collins have made the most of their time creating a consortium mix of films, plays, and events that connect with audiences because as Collins notes, “everyone has a crazy family.”

Perhaps the best example of crazy originates in Sordid Lives, the anchor of the Shores franchise that began as a play in 1996 and became a film in 2000. The film revels in the hysterical idiosyncrasies of an extended Texas family while at the same time showing its compassion of a family member coming out gay.

Although drawing a modest amount of income from box office receipts, Palm Springs’ LGBTQ community took the film under its wings and helped make it into a cult classic. Sordid Lives ran 96 consecutive weeks at the Camelot Theaters.

That was 20 years ago, and Shores and Collins had originally scheduled a screening of the film as part of a May event at the Camelot. The coronavirus pandemic canceled that gathering, so Shores and Collins found a way to still celebrate the milestone with a virtual reading of the play May 31 involving much of the original cast via broadcasts on Facebook and Youtube.

The event benefits the Del Shores Foundation, which encourages the development of LGBTQ writers across the film, TV, and theater industries. Only this time the money raised will go directly to a group of 20+ non-profit supporting theaters across the country to keep them afloat during the pandemic.

The duo, who met in 2005 during a run of Shores’ Southern Baptist Sissies at Uptown Players in Dallas, chat with Palm Springs Life about their collaborations, the event, and the unfaltering support of the Sordid Lives brand.

Did you think that you would still be working together?

Emerson: Oh yes. I grabbed a hold of those coattails and said, ‘I’m not letting go.’ I said, ‘You'll have to pry these coattails from my cold, dead, hands.’

Del: ‘He's so silly because the truth of the matter is with our partnership and the way it really works is, my career is over.

David Cowgill, Beau Bridges, and Newell Alexander will return for the May 31 event.

If Emerson ever says, ‘I’m leaving this Del Shores operation, I'm done.’ Or, ‘I got a series, and I'm going, ‘Okay, I'm just going to retire. I'm just going to go down to Palm Springs and hang out at Eight4Nine…’

Why does the partnership work?

Emerson: What's inspiring about Dell's approach to his work is ‘this is what I want to do’. And then we say, ‘Okay, how do we make that happen?’ And more than a few times, if we had known at the beginning what we knew at the end, we probably would have said, ‘Don't try to do that.’ But the naivete of attempting has led us to figuring things out. Oh, we want to do a national tour, let's figure that out. We want to do another play, we know how to do that. We're going to do a TV series, let's do a movie. Oh we didn't do that great, let's do it better this next time and we'll start our own company and do it. So everything we've done has been out of creating our own opportunities to work.”

Del: And I think that the biggest lessons that we have learned along the way is first and foremost, don't work with assholes. And secondly, take control of your work. Really take control of it, because when you let someone else have it, that's when it gets really fucked up.

What was the impetus for this virtual reading of Sordid Lives?

Del: What really sparked me to think of this is one of our partners (of the Del Shores Foundation) in Knoxville, one of the theaters there was expressing that they may not make it through this (pandemic). And they're 40 years old. And you've got your theaters there in Palm Springs as well. Everybody's doors are shut and stages and seats are empty.

So I thought, I wonder how I can help our partners because I mean, the intent always for our partners, was that they would help the foundation find new writers, new storytellers, and with our contests. But we never thought that part of our mission would ever be to raise money for our partners. And this just seemed right. And Emerson and I started brainstorming and this seemed to be the right decision.

It's great that Olivia Newton John agreed to be involved even peripherally.

Del: She was one of the first I ask and she said, 'I'm not able to do the reading.' Olivia has been very open about her health and fighting cancer for the past three years again. And she's doing really, really well right now, but she said, 'I'm not vocally there to do Bitsy May,' but she loves Debbie Holiday, so she gave her blessing and sent us a beautiful message to play that night. 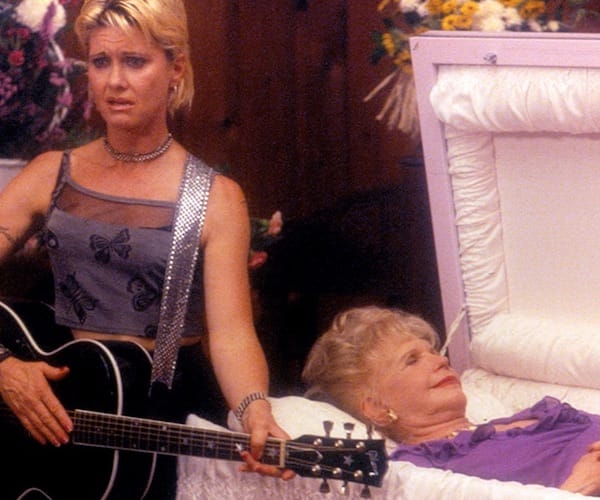 Olivia Newton John won't be able to participate in the reading, but sent a message that will be played that night.

You mentioned there are some differences between the play and film version. Without giving it all away, name a couple.

Del: The big difference is that in the play, it is told in four different chapters. What do you think Emerson, 80, 90 percent of the play is the movie?

Emerson: It's the same, it's just the structure is really different and that actually facilitates this livestream really well. There's only four people on screen in the first section and the second one, there's only six. So it's not until the funeral where you get to 12 people on a giant zoom. So it will actually really facilitate people being able to see and really enjoy the actors reading live.

Your brand here specifically in Palm Springs has always had an amazing connection and it kind of defies explanation sometimes.

Del: I always feel such a level of gratitude mainly to Palm Springs because this Sordid crazy world that we love and has been so good to us, it would have never happened if it hadn't been for Palm Springs and the Camelot Theaters. Over the years, I understand it a little bit more, especially now I have a place in Palm Springs, and I go down there a whole lot more. And I realized that one of the things that happened is Palm Springs just was... They were just so proud. They were so proud of Sordid Lives.

Emerson, what do you think is part of the attraction to the story and the brand itself?

I think that no matter where you're from, what kind of culture you grew up in, everybody feels like their family is a little crazy, right? Like I feel like that's a universal feeling. And so I've always found that the specificity of Sordid Lives is also what makes it sort of universal. I've always felt like the big theme of Sordid Lives is learning to love the family you have as they are, not as you wish them to be. And that sometimes it's hardest to do that with family. We tend to accept friends and other people as they are, and we always want to change our family. And when you learn not to do that and love them warts and all, the life you live together is so much more enjoyable.