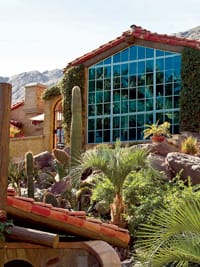 A labyrinth of stone pathways crawls up and across the mountainside, each turn revealing an unexpected view; gardens of cacti and agave; citrus, guava, mango, and banana trees; outdoor tubs and fireplaces; a barbecue and fire pit terrace; a grotto lined with grape vines; and intimate alcoves perfect for reading, meditating, or just enjoying the view. An adult-sized, palapa tree house is large enough to host a small party and high enough to provide views across the city to the mountains beyond.

Above it all sits the main house, built in the mid-’20s by artist John Burnham, the son of Chicago-based architect Daniel Burnham (renowned for his work as supervising architect of the Chicago World’s Fair and for designing numerous early sky-scrapers, including the Flatiron building in New York City). The younger Burnham is notable not so much for his modest artistic talent, but more for starting an artists’ colony on the Palm Springs property in the late ’20s.

For the past 10 years, Dave Johnston oversaw construction of rock walks, the mortaring of bricks, landscaping, painting, tiling, and otherwise painstaking restoration of the estate — with the intention of creating a singular bed and breakfast. While his family lived on the 6.5-acre Palm Springs site, his children sat on rocks cooled by a waterfall on hot summer days, and he and his wife relaxed on any number of outdoor seating areas in view of the famous Albert Frey house perched higher on the mountainside.

However, as the project neared completion, Johnston decided to sell the home site of the late Francis Crocker — “Father of the Palm Springs Aerial Tramway.”

“This is the end of the line in Palm Springs,” Johnston says. “It’s the last best place. It’s also one of the first pieces of real architecture in the city. Acquiring the pieces of the puzzle was a challenging experience. The renovation and the development of the gardens has been an equally challenging journey, like raising a child. Every rock, brick, and plant has meaning to me and my family. The property now has a rejuvenating energy; it has soul and a great vibe. However, like raising a child, there is a time to let go. That time has come. We will be sad to sell the property, but we will always be proud of the end result.”

Little is known about John Burnham beyond the facts that he maintained a primary residence in Pasadena, loved fine art, and traveled extensively. It was after a trip to Europe, where the architecture of Spain and Portugal enthralled him, that he etched his winter estate onto the lower edge of the San Jacinto Mountains. In addition to the five-bedroom main residence, he built a two-bedroom guest house and a trio of bungalows to house his less financially secure painter friends.

The estate became known as “The Street of Spain” for its resemblance to the European architecture Burnham had admired. Regular guests included famed Russian Nocolai Fechin, German Carl Eytel, and Americans John W. Hilton, Maynard Dixon, Clyde Forsythe, and Jimmy Swinnerton. Works by these artists, many of which were painted while staying at Burnham’s estate, are included in museums throughout the world.

Burnham owned the estate and oversaw the art colony into the 1950s, when he sold the main house and two of the bungalows to Crocker. That portion of the property remained in the hands of the Crocker family until 1997, when Johnston and his wife purchased it. Over the next four years, the Johnstons acquired the guest house, the third bungalow, and the remaining grounds of the original estate. The family moved into the main residence and immediately began massive renovation.

“It was very private when it was built,” Johnston says. “You had Nellie’s Boarding House, Coffman’s Desert Inn, the Pearl McManus house, and then this sat back up on the hill by itself. The view of the desert was spectacular. That’s what we’ve tried to re-create — that sense of seclusion, along with the view.”

The place epitomizes the Arts and Crafts Movement. The course, reddish log cabin-style brickwork (added by Johnston) blends perfectly with the mountain rising behind. And in a few spots, the mountain blends perfectly with the house: a downstairs hallway wall is solid granite, a boulder juts unabashedly into a bedroom, and a small “cave” in which Johnston embedded a stone Bacchus evokes the image of an Old World wine cellar.

With every enhancement, Johnston strove to maintain the estate’s architectural integrity. Almost all of the doors and steel casement windows are original; and where they had to be replaced, they were milled to match the original. The tiles from the roofs were salvaged and reused. Even the pastel paint colors on the bungalows are original. “As we took the paint down on the upper bungalow, we saw that it was originally pink, so we came up with that color and matched it,” Johnston says. “The green one below is also the original color.”

The primary difficulty in renovating the property was bringing it up to modern standards while maintaining Burnham’s intent. Among the most problematic rooms were the kitchens. “In the main residence, the kitchen was also the laundry room,” Johnston says. “They used to slide a washing machine in on wheels and hook it up to the sink. We reworked the space to create an actual laundry room and a pantry. We also made it bigger.” The cabinetry was replaced, as well, with a design to match the Stickley furniture and other Craftsman elements Johnston found throughout the property. “Everything was done to mimic the 1920s,” he says.

Burnham obviously designed his estate for outdoor living, which has made the transition to a bed and breakfast or spa resort a bit easier. “Every room in the main house has access to the outdoors,” Johnston says, noting that one of his primary goals in the renovation was to significantly enhance the outdoor space. For instance, Burham built two outdoor fire elements; Johnston added another four, including a God of Fire from which flames emanate from the god’s open mouth. Water elements are also plentiful. In addition to renovating a pool installed by Crocker, Johnston put in a larger pool farther up the mountain, along with waterfalls, plunge pools, spa pools, and open-air showers.

The landscaping, originally minimal, is now an attractive and functional design element adding not only beauty, but also privacy. “What we tried to do is transition from desert to semi-tropical to full-on tropical,” Johnston says. “There are all different gardens in transition. One is blue: blue cactus, blue agave, blue everything. Below that are citrus trees. We have tomatoes, peppers, nine different varieties of grapes. You can walk through the gardens and harvest. And the gardens help to privatize all the little areas. With a resort, we felt it was very important to privatize.”

Johnston harvested existing plants from the estate to populate new gardens. Above the main house, he created a palm grove with seedlings from trees already on the property. “We just brought them up here and pushed them in the ground,” he says. All the barrel cacti were harvested from the estate as well, and the many agave come from a single source. A few original plants, particularly the specimen cacti, were relocated to make them more visible.

Despite the estate’s architectural and historical significance, it is little known even in Palm Springs. “When Burnham built it, he brought a lot of artists in,” Johnston says. “The desert artists, this is where they used to hang out. But this isn’t one of those places where famous actors and actresses stayed. The art colony is what it was known for. A friend of mine stayed here in the 1980s, and the canvas racks were still in the guest house.”

Realtor Scott Lyle, who will be handling the sale, says, “In the 30 years that I have been selling real estate in Palm Springs, I have never seen a compound like this. Amazingly, it is right downtown. The property is destined to become a world-class spa or personal retreat.”

In the years that elapsed since Burnham built his winter estate and art colony, Palm Springs has grown from a sparsely populated frontier town into a thriving, sprawling oasis. The desert vista that inspired Burnham and his fellow artists has been altered forever, but remains spectacular.