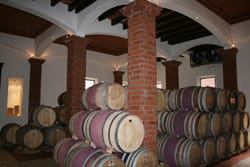 Known more for tequila and beer than wine, Mexico’s Baja Peninsula holds a few surprises for wine drinkers. About 70 miles south of the U.S. border lies the Valle de Guadalupe, with about 30 wineries scattered alongside Highway 3 (known as the Ruta del Vino).

Steve Dryden — who lives in the area, writes about the local wine, and offers Baja wine country tours — calls Guadalupe Valley an “emerging area” in the wine trade and says that in blind tastings tempranillos from Mexico are beating those from the grape’s native country of Spain, while L.A. Cetto’s nebbiolo was rated “top nebbiolo in the world, except Italy.”

The first is water, which will only get harder to come by thanks to the proliferation of condo and hotel construction along the Baja coastline where developers (including Donald Trump) have snatched up every parcel with an ocean view. Dryden believes Guadalupe Valley will peak at 50 wineries, at which point water will become too scarce for further growth.

The second hurdle is a lack of demand. Mexican residents consume a mere .04 gallons of wine per capita a year, compared with two gallons a year for Americans. Thus, they have to rely on their northern neighbors to drink up. But Mexican wines are rare in wine shops and on restaurant menus in the United States.

“It’s kind of an industry in its infancy down there,” says Mark Sullivan, a Southern California wine distributor who thinks wine sellers in the states are taking a wait-and-see approach. “I think the Guadalupe Valley is going through an experimental phase.” Sullivan believes it will take more press and medals to create consumer demand. Events that could help include Latin America Month at the COPIA wine center in Napa Valley, where wines from Mexico were presented along with Mexican cuisine and art in January (the event’s second year).

Meanwhile, U.S. citizens making the trip to buy wines directly from the wineries are limited to how much they can bring back: one bottle per person or three bottles per two people traveling together. Crossing the border, however, is getting increasingly longer and won’t get any easier when passports are required beginning in 2008. Getting back across the border can take hours.

In January, Dryden led a tour from San Diego visiting four wineries in Guadalupe Valley, where the wine country is 14 miles by five miles (about two-thirds the size of Napa Valley, according to Dryden). On the bus trip, he explained that, while Spaniards planted mission grapes in Baja as early as the 1500s, it was the pacifist Molokan immigrants fleeing Russia to avoid being drafted who really jumpstarted the Mexican wine industry in the early 1900s. (The Molokans also established the now-popular seaside resort of Ensenada.)

Dryden referred to Vinisterra (pictured above right), the first winery on the tour, as “one of the top five wineries in Mexico.” It was begun by a group of domino-playing friends who started blending wines in their kitchen. These home chemists irritated local winemakers by entering their wines in competitions and winning medals. Validated by those wins, the group hired a Swiss oenologist, built a $1.25 million facility, and are now producing 5,000 cases a year. Their tasting included a grenache, a mission-tempranillo blend, and cabernet-merlot blend. Vinisterra produces about 5,000 cases of wine a year and plans to expand its operation to 7,500 cases.

Mogor-Badan, the second stop, is the only winery outside of Switzerland to grow the chasselas grape. Although chasselas white wine was not offered for tasting, the women in charge of the winery poured their cabernet and a blend of cabernet franc, cabernet sauvignon, and merlot. The small winery, which Dryden says produces only 10 barrels a year, offers a rustic stone room for tastings poured at a simple table. Outside, another table holds jars of organic marmalades. On the way to La Casa de Doña Lupe, Dryden informed the tour bus passengers that Doña Lupe herself is 80 years old and has been growing organic produce in Guadalupe Valley since the 1960s. The winery offers an outdoor patio, where servers poured tempranillo; a reserve chardonnay; and a blend of cabernet, merlot, petit verdot, and malbec — accompanied by some of the preserves, olive oils, and snack mixes offered in the winery’s adjacent shop. L.A. Cetto has one of the largest tasting
rooms in Guadalupe Valley.

A popular time to visit Guadalupe Valley is in August for the Fiestas de la Vendimia (this year Aug. 4-20). For information, visit www.fiestasdelavendimia.com.

Belle Marie Winery stands like a mirage on Interstate 15. On a hill above the freeway at Mesa Rock Road in Escondido, Mick and Marie Dragoo have replicated a chateau castle owned by Mick’s ancestors in La Rochelle (Bordeaux), France. His winemaking heritage traces back to the 1600s.

The winery is anomaly for another reason: the Dragoos get all of the grapes for their wines from Guadalupe Valley in Baja, Mexico. On 154 acres, they grow an astounding 64 varietals from all over the world.

“To my knowledge, we are the world’s largest vineyard in terms of the number of varietals grown in the same state,” Mick says. They grow a lot of Italian grapes, as well as varietals from Spain, France, Portugal, Australia, Argentina, and South Africa.

Traveling the world teaching dental surgery, Mick brings home cuttings whenever he finds a wine he likes. He expects to be at 104 varietals in three years. At the moment, the Dragoos produce a total of 5,000 cases a year of 26 different wines under two labels.

The Belle Marie label (the watercolor-styled logo was designed by their kids “over drinks in a sushi bar”) represents the fruit-forward, approachable New World wines. The Chateau Dragoo label represents Old World-style wines aged a minimum of two years in oak. Mick and Marie Dragoo pour one of their
Chateau Dragoo wines in their Escondido tasting room.

The Dragoos, who owned a winery in Napa for 11 years, started building in Escondido in 1998 and opened Belle Marie in 2000. The chateau and wine cave are available for parties, weddings, and corporate events — and to host a special wine-blending party each April. That’s when a half-dozen teams of wine club members get to create their own blends from six varietals. While they retire to dinner, Mick makes enough of each formula for a taste-off among the participants. He subsequently makes 800 to 900 bottles of the winning blend (though he admits he may “tweak it a little) specifically for wine club members.

As for his own winemaking skills, Mick relies on the fruit. “If you listen to the grapes, they’re going to lead you in the right direction,” he says. He samples from the vineyard through the crusher and from every fifth box “to get a feel what the acidity is, where the balance is.”

In addition to growing organically, the Dragoos dry farm their vineyards to force the grapes to go deep into the soil. “Some vines are over 60 feet into the ground,” Mick says, explaining that while dry farming lowers the yield, it keeps the grapes from picking up salts and minerals on the upper layers of earth.

Belle Marie’s flagship wine is Maestro; the 2002 vintage comprised 80 percent cabernet sauvignon and 20 percent nebbiolo (the winery’s most-grown grape). The Chateau Dragoo label includes the white Paradiso (a blend of cortese, trebbiano, arneis, vernaccia, fiano, and Greco) and the red Chateauneuf du Pape (a blend of grenache and syrah), as well as Brunello and Barolo bottlings and a vintage port consisting of late-harvest zinfandel and tempranillo.
Information: (760) 796-7557, www.bellemarie.com