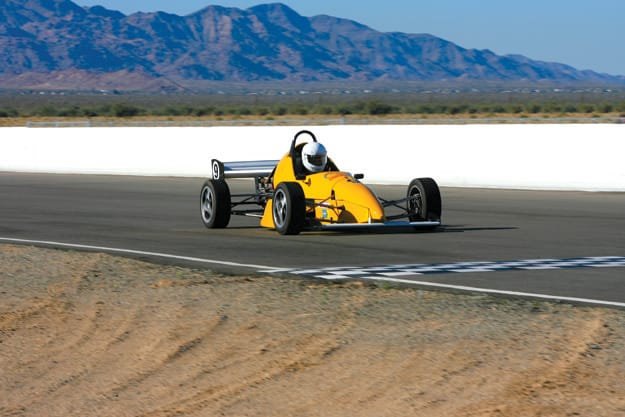 Most folks enjoy the desert for its casual pace. Micky Grana isn’t one of those people.

In the spring of 2010, Grana realized a dream that had been revving his engine for 15 years. He and his investment team opened Chuckwalla Valley Raceway in Desert Center, just off Interstate 10 between Palm Springs and Blythe. The longtime co-owner of SoCal Trackdays (an outfit that organizes track events for experienced racers), Grana had a vision for CVR that was deeply rooted in the desert sand more than a decade ago.

“We started SoCal Trackdays about 11 years ago,” Grana recalls. “We were just a couple of guys who wanted to go to the racetrack, who were a little fed up — for lack of a better term — with how other track events were being run. We wanted to be able to do our own thing.”

But there wasn’t enough road.

Today, Grana no longer searches for asphalt. After three years and $10 million worth of construction, CVR proudly waves its green flag through the desert air, amid the scenic backdrop of Desert Center.

More than 1,000 acres make up the raceway, drawn from a former military training ground that includes a still-active airstrip. “This was Gen. Patton’s training facility, the main base for the Rommel campaign,” Grana explains.

Although the area may be associated with wartime, safety was a priority in creating CVR’s main track. Working alongside luminary track designer Ed Bargy, Grana crafted a racetrack for motorcycle and car enthusiasts that is among the most lauded in the region.

“It’s 2.68 miles with 17 turns, 40-feet wide, and bidirectional; it goes clockwise and counter-clockwise. And we have 250,000 square feet of parking area or paddock,” Grana describes, adding that it’s regarded as one of the safest tracks in the country because of how it was created. “We built it with nothing to hit,” he says. “We removed all obstacles, so it’s super safe.”

Though drivers may top out at speeds of 170 mph at other tracks, setting land-speed records isn’t Grana’s objective. “I didn’t want something that was real high-end, top-of-speed,” he explains. “Because it’s intimidating and it gets people hurt. When you deal with street, entry- or even intermediate-level vehicles — whether it’s cars or motorcycles — they are much more powerful and work better than people’s abilities to drive them.”

“We can do private events with as little or as much help as people would like from us,” Grana says. “We can have a group come out and we’ll put them in our race cars and do a whole one-day program for them. Or we’ll have people come out and they rent the track and we leave them alone.”

But no matter your experience level or top speed, prudence always wins at Chuckwalla. While expert racers can achieve speeds of 130 mph on the track, Grana recommends that newcomers start out slow.

“It goes back to your experience,” he says. “Racetracks involve adrenaline, and when adrenaline gets involved, decision-making goes out the window quite a bit. Lack of experience requires a little more of our assistance. But we make it happen any way possible.”

Regardless of who finishes first at Chuckwalla, Grana’s dream is that memories always usurp medals.

“Our goal was to make it fun and safe for everyone,” he says. “We want to create an experience where people go home and are talking about it for the rest of the year.”