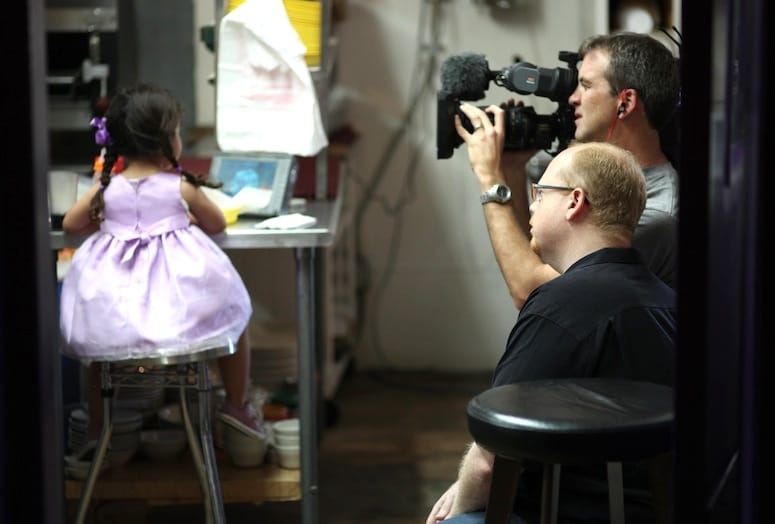 “Everyone has some relationship with food. Whether you care about it or it’s just a simple plate of food to eat…Food can take on more meaning, a relationship, a shared meal, memories.” – Joseph Levy

Growing up in Corpus Christie, Texas, Joseph Levy remembers discovering his love of science led him to the kitchen.

“My interest in food also came from being in the kitchen with my Dad,” Levy says. “He would bring home different things to experiment with for my science projects. I learned that the cooking is also chemistry, just more fun and tastier than a science project.”

Levy’s fascination with food led him to the Food Network where he was thrown “Into the Fire” with the television series and exposed to “behind the scenes” restaurant lines dealing with culinary competitions, celebrity chefs, and kitchen chaos.

A little more about Levy:

After losing his father, Levy decided to tackle a long desired film project as a tribute to his Dad. “I decided I wanted to go in another direction… to take storytelling in the food world to a deeper, more truthful representation of a restaurateurs life,” he says.

With the film, “Spinning Plates” in mind, Levy knew the story he wanted to tell would be complicated, emotional on top of intertwining the accounts of three restaurants.

“I just wanted to ‘stare at a lake’,” he says, “to concentrate and figure out this story. Palm Springs is one of my favorite destinations, very peaceful, so I rented a house in Rancho Mirage with a view of a lake, and edited this film. It was a healing process.”

Palm Springs Life was fortunate to catch Levy before his return to Palm Springs for a Q&A session after the screening of “Spinning Plates’ Dec. 14 at Cinemas Palme d’Or in Palm Desert.

What was your greatest challenge in your directorial debut?
“Funny thing is that the truth in making this film versus television came with more benefits than challenges. I wanted to tell the story how I wanted to tell it and how best it should be told. I had more freedom of telling a story without restrictions because television is limited to how deep you can go. That being said, the challenge of this film was the complexity of the story of three, seemingly, dissimilar restaurants.”

Did you think about focusing on just one restaurant?
“I had the goal of setting up the film to make a statement about the universality of food, emotion, and meaning of food. Crossing over into restaurant businesses, I wanted to make a movie about how food can mean so much more and using three different example seemed to make the statement bigger…grand.” How would you characterize your films grand statement about food?
“Food means much more to many people than we might assume…food is more than food- it’s more than three restaurants- Food is also about life’s interactions and relationships.”

What was it about these three stories that tied them together for you?
“The film starts with the feeling that the three restaurants have no business being in the same story. As the movie progresses, you find unexpected similarities in backgrounds, legacy, family, mortality and day-to-day survival. The playing field is leveled. All three stories are examples of triumphs and struggles…human stories.”

What is it about the restaurants that make their stories relatable to audiences?
“I think that their stories are more than food stories and food movies; they are human stories and emotional. They are relatable because regardless of how you relate to food, whether you like a small mom and pop or high-end dining, each restaurant is actually going through the ups and downs and pleasures of real life.”

You may see him at one of these local restaurants: