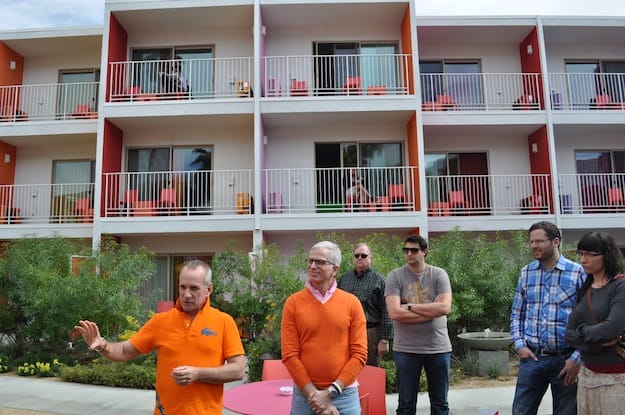 Of all the nerve.

A month after the Palm Springs Architectural Advisory Committee rejected the concept of using a 14-color scheme on The Saguaro Hotel, formerly the Holiday Inn, architects Peter Stamberg and Paul Aferiat gave the same presentation with none of the committee’s suggested changes incorporated.

“There is dead silence in the room, and the head of the advisory comittee chairman says to us, ‘I’ve got to tell you, it took a lot of nerve to come back here with exactly what we rejected a month ago. It also shows the courage of your conviction’,” recalled Stamberg during a tour on Feb. 16 of the hotel property nearly a year since the paint job.

Ewing then turned to his fellow committee members and asked for their vote, categorizing the moment as a life or death window for Palm Springs, according to Stamberg.

“He told the committee that if we turn this away, we will be turning away the most thoughtful thing to come to Palm Springs in many decades,” Stamberg said. “When you hear the reason behind it, that the colors came from our wild flowers in the Coachella Valley, no one has done anything as thoughtful. If we turn our backs on this, we will be admitting that this is a dead city.”

The 5-0 vote in late 2011 by the Palm Springs Planning Commission put an end to a whirlwind of public debate on such a dramatic building makeover from a drab green look to one screaming with a spectrum of colors at the intersection of Sunrise Way and East Palm Canyon Drive.

One Palm Springs business owner believed the 14 colors was a way to brand Palm Springs as ‘gay’ than matching the colors of desert flowers, according to Desert Sun articles. Others believed the color scheme should be relegated to the inside of the building’s courtyard. But several residents sided with the architects’ vision, noting the colors would breath vibrancy and life into the community.

Similar Reaction in Scottsdale
This wasn’t the first time the two architects had created a furor over one of their projects representing the New York-based developers Sydell Group LTD. Just a few months prior to the Palm Springs presentation in 2011, Stamberg and Aferiat presented a similar color splash to the Saguaro Hotel in Scottsdale, Ariz.

Scottsdale city code requires building colors to use the colors of the desert, according to Stamberg. “Scottsdale is unrelentingly beige,” he said.

The Scottsdale property was very much like the one in Palm Springs – a 1970s building with balconies and walls with a courtyard and pool. Before they even met with the city’s planning commission, Stamberg said they were assigned a planning officer who helps walk them through the various channels.

They showed her their idea of incorporating the colors of desert wildflowers.

“She says to us, ‘Are you kidding, of course,’” Stamberg recalled. “We said, ‘Actually, we’re not.’ She said you know the building code says you have to use colors of our desert. And we said, yes, we know that. So we took out our last presentation board of a dozen flowers indigenous to the Mojave Desert right in the Scottsdale area. And she said, ‘This is amazing.’”

She gave the project staff approval, which Stamberg said meant they would be able to bypass presenting their project to the commission entirely. But on one condition.

“The promise we had to make,” Stamberg said, “was the moment that she got the papers signed, we would have a swat team in there to paint the hotel and get it done before anyone could stop it. We did, and it got done, and people were screaming and then all of a sudden the tide turned.”

One Year Later
A year later, the Saguaro Hotel is one of the most recognizable buildings in Palm Springs. It’s also one of the featured properties on the Palm Springs Bureau of Tourism website and mailings to prospective visitors.

Now the color scheme is more a point of discussion, a story to be retold during Modernism Week.

Stamberg said 14 colors were chosen to match the longest façade of the hotel, which is 14 rooms with 14 balconies. “We arranged the colors in a spectrum,” he said. “Everything we do was because of the light. If you imitate the spectrum, you are starting to imitate light. So we painted one color on one side of the balcony wall and the opposite color on the other so the combinations are completely different. There are 52 different room combinations in the hotel.”

“So if you visit the hotel multiple times, you get a chance to experience the hotel in a completely different way based on color combinations in the room even though the elements are the same,” added Aferiat.

The hotel’s courtyard presented an entirely different challenge. The project’s timetable necessitated getting it done within a year, so rather than try and wrestle with city officials over the fencing that surrounded the pool, the architects created an abstract mountainscape after hearing Palm Springs landscape architect William Kopelk describe the view of the mountains from the courtyard.

“We wanted to pay homage to the great heroes of Palm Springs architecture like Albert Frey and Richard Neutra,” Stamberg said.

The result is the old fence is hidden and the courtyard uses some of the same colors from the building to create separate play areas, including a bocce court.

“The great thing is the Sydell Group was open to the idea of making the experience of staying in a hotel something about optimism,” Aferiat said. “As opposed to being safe. Everyone checks into a hotel that is about beiges and neutrals. Here they wanted the experience to be fun. This is a town that when you think about it, it’s about fun.”