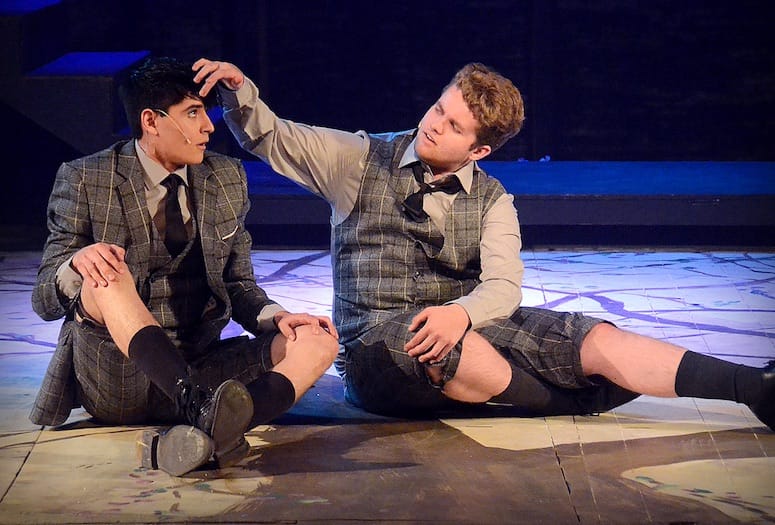 Noah Arce as Ernst and Scott Clinkscales as Hanschen in Spring Awakening at Palm Canyon Theatre.
PHOTOGRAPHS BY PAUL HAYASHI

Ignorance is not bliss. This is the unofficial theme of Spring Awakening, a musical with book and lyrics by Steven Sater and music by Duncan Sheik. Based on a teen-angst tragedy written by German dramatist Frank Wedekind in the last decade of the 1800s and first staged in Berlin in 1906, the show was a reaction to the sexual repression of the nineteenth century, telling the story of teenagers discovering their own sexuality and how a lack of accurate information can lead to calamity.

The show opens with a young woman, Wendla, bemoaning the fact that her mother insists on keeping her in the dark on certain issues, including where babies come from. (When pressed, her mother tells her that conception occurs when you love your husband with all your heart.)

We then meet a group of boys in a Latin class. One of the students, a nervous nelly named Moritz, laments a similar lack of information. He’s been having sexy dreams, which he thinks is a bad thing. When his friend Melchior, who has learned about sexuality from books, tries to set him right, Moritz is embarrassed and asks that the information be written down instead.

When Melchior’s sexual essay is discovered by adults, his parents and educators are appalled. He’s in further hot water when it comes to light that he’s also been instructing Wendla. No spoilers here, but things don’t go well for either. The show ends on a somewhat positive note, though, when the kids realize that their generation’s behavior is bringing about changes in the right direction.

Nicholas Sloan, who plays Melchior, is a star in the making. This supremely talented young man sings, acts, and dances like a pro. When he’s onstage, you can’t take your eyes off him. His singing voice is smooth, clear, and he has a gorgeous falsetto to boot. 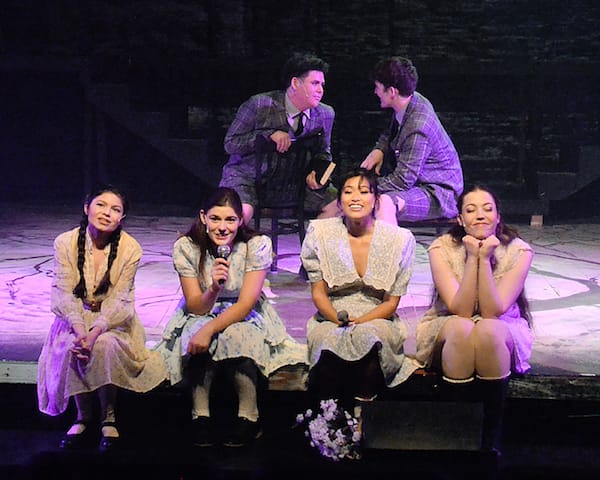 M. Carrick O'Dowd as Moritz  (left, back row) and Nicholas Sloan as Melchior.

Equally compleat is M. Carrick O’Dowd as the tortured Moritz. When he sings his anthem, “Don’t Do Sadness,” you’ll weep for him. This is a boy in pain, a boy who’s been rejected by his family — and, in this bravura performance, O’Dowd makes Moritz’s pain real; you genuinely feel for him. It’s incredibly moving.

As the virginal and uninformed Wendla, Jamie Leigh Walker shines. Possessing a beautiful voice and a shrewd command of the innocent, Walker convincingly brings her character to life without making her pitiful; her Wendla is a strong young woman with convictions, a young woman with immense promise whose only downfall is her ignorance. Also worthy of mention is the performance of Scott Clinkscales as Hanschen. His reprise of “The Word of Your Body” is a joyous celebration, and — regardless of what bolt of cloth you’re cut from — you want to be in his shoes. You’re on his side.

While everything on the stage at the Palm Canyon Theatre is expertly executed, from the wardrobe to the set to the performances, the material itself is a bit odd. While the play is an old-school melodrama — uninformed kids rebel, then experiment, then suffer — the show is billed as a rock musical. And the contemporary-sounding score comingles somewhat awkwardly with the show’s 1890s–era setting. 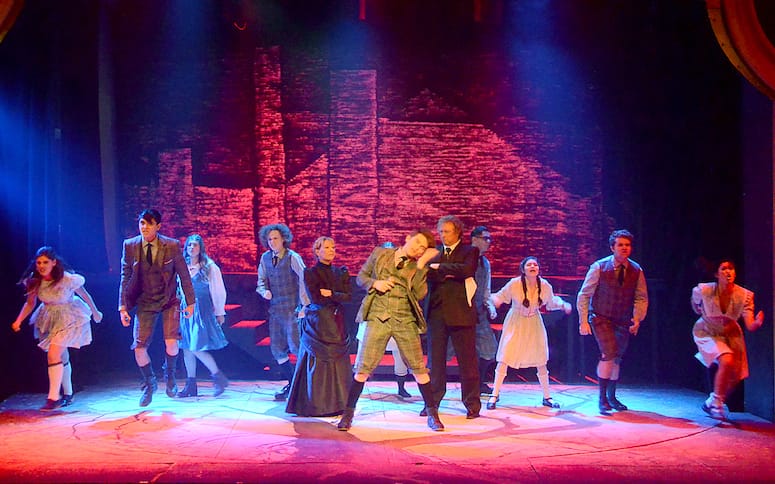 Nicholas Sloan as Melchior caught in the middle.

And then there’s the anachronistic use of hand-held microphones, many of them pulled from the pockets of characters, others brought out on mic stands and placed at the foot of the stage — despite the fact that the actors were wired with body mics. Normally in musicals, players segue seamlessly from dialog to song. In this case, however, when it’s time to sing, a character pulls out a mic or leaves the action to walk to a mic stand, essentially transporting us from a serious drama to a glitzy rock concert. It’s a bit jarring, but since this was a gimmick used in the original Broadway show, it’s by no means the fault of this production.

What else is happening in local theater?

Read our review of Ruthless! The Musical playing through July 15 at Desert Rose Playhouse.