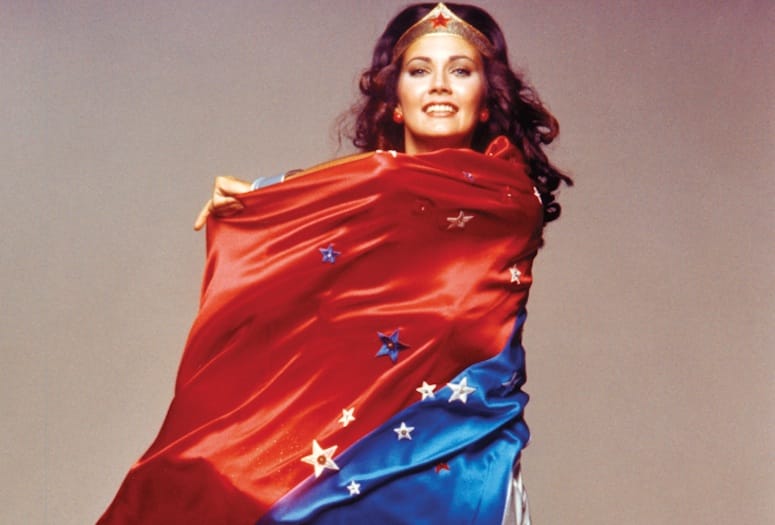 Her best-known onscreen character can outrun jungle cats, leap from tall buildings to land firmly on her feet, read minds, speak all the human languages throughout history, and repel bullets with her wrist cuffs. Still, the actress is humbled to be called a “superstar.”

Lynda Carter has become an American cultural icon, embodying many of the same qualities of her Wonder Woman character, Diana Prince: fighting for justice, peace, and love — and inspiring females of all ages to embrace their power.

During a recent visit to Palm Springs to celebrate her Golden Palm Star dedication as the 369th honoree on the Palm Springs Walk of Stars, the Emmy Award-winning actress and singer, sporting chic white slacks and a pastel jacket, exuded a softer appearance than her superhuman alter ego. But as she smiled at her fans, enchanting them with her signature sparkling blue-gray eyes, her own human powers to captivate were revealed — no cape needed.

Carter was chosen for her achievements in show business as well as her philanthropic and humanitarian efforts.

“The ceremony brought tears to my eyes,” Carter says. “What beautiful things to say about another human being … it brings you to a personal place. It is a recognition of your work.”

Surrounded by family and close friends, including husband Robert Altman and television host Mary Hart, Carter was presented with her star by Bionic Woman actress Lindsay Wagner. The pair have been friends for more than 30 years, bonding over their shared experiences as television industry pioneers and strong leading ladies, as well as raising families. Carter also acknowledged her two children at the ceremony’s reception speech — son Jamie is about to pass the bar and daughter Jessica is attending law school.

“I am most proud of my family and what they do,” Carter says. “Nothing can exceed that.”

A daughter of the desert, Carter was born and raised in Phoenix in a home filled with music. Her mother is of Mexican and Spanish heritage, and her father of Irish and English. Her parents’ combined interests introduced Carter to musical styles that included contemporary, jazz, blues, country, and classical, which continue to inspire her. Carter made her singing debut at age 5 and began performing professionally at age 14. Encouraged by her mother, Carter subsequently joined a band. By the time she was 17, she was touring the country with artists Speedy Garfin and the Garfin Gathering.

But it was rough on the road, she says, playing lounges and clubs while living out of a suitcase. In 1972, barely 21, Carter decided she needed a change. “I just felt like I was going nowhere,” she says. “I didn’t really know what I was going to do, but I knew I had to do something different.”

She gave notice to the band, and, after a nudge from her mother, entered and won the Miss World USA title. The experience was the springboard for a move to Los Angeles, where Carter sang, wrote, and studied acting. In 1975, after 2 1/2 years of churning out jingles and attending acting workshops, the struggling artist was down to her last $25 when she scored the lead role in the Wonder Woman television series. She was one of 2,000 women to audition.

VIDEO: Lynda Carter is honored at the Palm Springs Walk of Stars event in May.

Carter brought the comic book character to life on TV from 1975 to 1979, shattering female stereotypes with her portrayal of a woman with superhuman powers determined to do the right thing. An enduring role model was born.

“I read the comics when I was a kid,” Carter says. “Wonder Woman is a force. She’s fantastic. It’s absolutely thrilling to be a part of it. At the time, there were not many good roles for women. Advertisers were concerned that a woman couldn’t hold a show. This part was a first in many ways, and it was a chance to portray a heroine that was beautiful, strong, and smart.”

The image of Carter in her Wonder Woman suit has become a symbol of female strength, a distinction the actress — modest to the point of being seemingly unaware of her attributes —  is quick to admit, with a sense of humor.

“Being known as Wonder Woman is a little hard to keep up with,” she says. “I get credit for a lot of Wonder Woman’s qualities that are not necessarily ones that I own personally. I don’t think you can live your life thinking you’re a role model; however, I lead my life in a way that I’m happy with the choices I make.”

Even as the superhero series was coming to a close, Carter continued to appear in modeling, stage, TV, and film projects. Her fondness for acting hasn’t diminished her desire to share her gift of song, however, and her music has continued to entertain audiences for more than 30 years. Her most recent albums — At Last, released in 2008, landed at No. 6 on Billboard’s Jazz charts, and Crazy Little Things, released in 2010 — built upon the success of her 1978 solo album, Portrait. She followed those up with an Emmy Award for her CBS television special Celebration in 1981 and headlined concerts throughout the world.

Carter says she enjoys creating musical arrangements with an element of the unexpected in her concerts and shows, and her style is a mix of genres.

“My background is blues and country, but there is an unstructured element to music I like to sing,” she says. “Influences from jazz and country, old style blues … it’s pretty cool. There is an open feeling. I do a lot of cover songs, but I make them my own. I don’t try to fit in a mold or a theme. It’s like hitting ‘shuffle’ on your playlist, and you don’t know what’s going to pop up. I always try to surprise.”

In addition to her busy concert schedule, Carter continues to accept TV and film roles — she’s appeared in Sky High, Smallville, and Two and a Half Men, to name a few. She has also earned accolades for her philanthropy, working with charities including the Special Olympics, Children in the Arts, Susan G. Komen Foundation, and Father Martin’s Ashley Women in Recovery.

“I am always moving forward, not reinventing myself but keeping busy and taking chances,” Carter says. “It’s scary as hell to put yourself on the line, and the truth is, it takes a lot of work. But you get yourself out there, and with discipline and tenacity, you prepare.”

While Carter has a natural love of the desert — in the late ’70s she owned what she calls a “patio home” in Palm Springs — she currently resides on the East Coast. Preferring to live in the moment, Carter says she avoids “looking in the rearview mirror.” She does, however, own the original television Wonder Woman suits — both the 1940s ensemble and the updated version that she wore in the 1970s.

In a 1981 interview with Palm Springs Life, Carter — then age 31 — revealed that she wasn’t born with the “wonder” shape for which her character was also admired (and envied). To keep in top form for the role, she did aerobics and ballet daily and followed a diet rich in fresh vegetables from her home garden. She never followed unnatural or pharmaceutical fad diets.

Today, at 62, she maintains a lifestyle that continues to keep her in great health. Carter concedes that while she doesn’t cook, she stays away from genetically modified foods and dairy, and opts for grass-fed meats and organic foods with high nutritional value. She also tries to keep active and has taken up sculling (a form of rowing) near her home.

“I enjoy it, and I own a couple of boats,” she says. “I am motivated, probably more than anything, by my great curiosity about life. My sense of curiosity in the world around me keeps me engaged and active.”