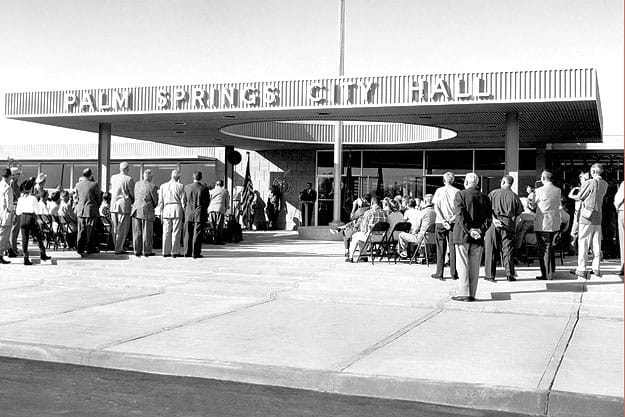 Governance in Palm Springs is a great equalizer no matter who you are or think you are.

Celebrities discovered Palm Springs long before it was incorporated 75 years ago. Here, away from prying gossip columnists, they let their hair down, relaxed in the sun, and began supporting local civic and charitable activities. For many celebs, it was a natural segue to local politics.

The lines between the locals and famous have blurred, with councils sometimes led by stars of cinema and often upstaged by a regular cast of citizens “performing” at council meetings, televised since 1988.

There have been 19 mayors in the city’s 75 years and around 100 council members, but far fewer city managers. Like the celebs who discovered “The Springs,” career administrators, who could have been stars in bigger municipal arenas, are also attracted to the desert lifestyle.

Councils like to nurture projects. However, many times they often hand off to the next council to reach the finish line, says Ready, an attorney and Ph.D., who at 13 years holds the record for longevity in the post.

A policy wonk since his days at Claremont McKenna College and Wharton Graduate School, King is a Coro Foundation Fellow who achieved the ultimate peer accolade when elected president of the International City/County Management Association.

Rob Parkins, city manager between King and Ready, now views the city from the top as general manager of the Palm Springs Aerial Tramway. Coming from Florida with a municipal and law enforcement background and a love of all things rail, Parkins “never met a stranger,” according to Kleindienst. “We traveled to Washington, D.C., several times, seeking federal funding. Rob connected instantly with people who helped us start rail service, expand the airport and set up a free trade zone.”

Frank Purcell served on the city council before direct election of the mayor when, as Purcell says, “Mayor Howard Wiefels was a supreme mayor, and the council team and staff worked together like a well-oiled machine.”

“Serving in the ’60s and ’70s was considered a civic duty,” he says. “There was no pay, and the council members had their businesses or professions. The planning commission was the training ground for council. Members took turns serving as mayor.”

Council members knew one another through service groups and community events, such as Desert Circus and Vanities, when show biz pros such as Carol Burnett’s famous choreographer Ernie Flatt coached the locals.

“We didn’t like the density of a Sunrise Way condominium plan we reviewed at study session,” Purcell says. “When the young developer came before the council, he convinced us otherwise. He was Bill Bone, who went on to be one of the most successful country club developers in the desert.”

The Purcell-era council did say “no” to an oil refinery near Banning that would have forever fouled the desert air, foreshadowing current Mayor Pougnet’s willingness to engage beyond the city limits in his fight to stop a proposed county prison at the gateway to Palm Springs.

The weather and the incorporation of Palm Desert and other cities in the 1970s led to major governance challenges in the 1980s, former City Manager Norm King says.

“The biggest challenge was infrastructure,” he recalls. “The year I arrived, we had one of the so-called 100-year floods. It was a horrific rain, breaching the Sunrise bridge and flooding the sewer plant. All the ground that had been paved over during the building boom of the 1970s further compromised the drainage. Hillside flooding overflowed the Tahquitz Canyon basin.”

There was urgency for the city, county, tribe, and state to complete a flood control plan that was in the works for 30 years. The council declared a building moratorium and issued sewer bonds. The Army Corps of Engineers built the bridge at Ramon Road and Sunrise Way and installed giant drainage pipes. And 4,000 homes on septic tanks were hooked up to the sewer system.

The city lost its Coachella Valley retail tax base monopoly as the East Valley grew in the 1970s. When the county used an unorthodox method of counting populations required for cityhood, a plethora of new valley cities was formed, each striving for a healthy retail tax base.

Issuing of the convention center bonds led to one of the craziest days in the city’s history, when a new federal tax change unfavorable to investors was to go into effect Jan. 1, 1987. The city had to sign 200,000 bonds before midnight on New Year’s Eve and rented a ballroom at Los Angeles’ Biltmore Hotel, where they could spread out the documents. After one key signer left early and had to return by cab from Palm Springs, the bonds were signed with a half-hour to spare.

Sonny Bono, elected in 1988, generated positive press for the city and brought back Hollywood glam by founding the Palm Springs International Film Festival and restoring the Plaza Theatre, home of The Fabulous Palm Springs Follies.

Bono — who wanted to know, “Why can’t I fire the police chief, just like New York’s Mayor Ed Koch” — was sometimes a challenge for the staff, King says. Yet, they marveled at his popularity and generosity. Visiting dignitaries had their hearts set on dining at Bono’s restaurant. As mayor, Bono could not be reimbursed. Rather than disappointing the VIPs, he picked up every tab.

Kleindienst, an architect who followed Bogert as mayor in 1995, says “there’s a difference between ruling and governing.” His accomplishments include completing the Amtrak station, the airport’s Sonny Bono Concourse, a downtown parking structure, and an iconic gas station visitor center, as well as privatizing the wastewater treatment plant.

Ready, the current city manager, credits the council’s creativity for weathering the recent economic downturn — and he notes the city is now undergoing a “tremendous renaissance.”

Current Mayor Steve Pougnet, who was re-elected to a second four-year term, says that innovative public/private partnerships put the city in excellent shape to celebrate its 75th birthday. Pougnet and the council have offset tax losses from older properties with The Springs big-box development at Ramon Road and Gene Autry Trail, Smoke Tree Commons, and the luxurious Mercedes-Benz, BMW, and Hyundai auto center.

Additionally, the convention center expansion required high-quality hotels and revitalized downtown shopping. “A hotel incentive program has vastly improved the stock,” Pougnet says. “The Wyndham has been refurbished into the new Renaissance Palm Springs, and older hotels, such as the Hyatt, Riviera, Ace, Parker, Viceroy, Saguaro, and now The Curve have been remodeled or rebranded for the next generation of visitors. We have hotels for everyone.”

Moreover, the city council and staff have worked with tourism and hospitality partners to create special events to stimulate the economy, says Pougnet, who notes the April 17 Tachevah Block Party in downtown Palm Springs — a Coachella festival spin-off event and precursor to the city’s 75th anniversary celebration on April 20 — as a good example. The party will feature local bands performing for the younger generation of visitors and residents.

With the Measure J sales tax in place, a revitalized downtown will bring a new shopping center and an anchor hotel.

In February, Pougnet, the city council, and Wessman Development invited the community to join them for the next phase in the demolition of Desert Fashion Plaza followed by a block party celebrating the city’s revitalization. “Palm Springs is undergoing a historic transformation, and hundreds of residents and business owners came out to celebrate what was truly a momentous day for our city,” Pougnet says, adding that the wildly popular Forever Marilyn statue also helped renew interest in downtown. “It’s an honor to lead Palm Springs during this important period in our history.”

As Palm Springs celebrates its 75th anniversary, the engine that runs the city still enjoys its celebrity status, yet remains firmly on track — with eyes on its rich past, exciting present, and a bright future.

The Path to Cityhood

The Oct. 7, 1937, edition of Palm Springs News reported on the presentation of an incorporation committee report to the public on Oct. 5. The paper published in full the report, which stated that the chamber of commerce had begun studying the possibility of incorporation “several years ago” and recommended dividing the city into seven districts for purposes of equitable representation of residents by city council members. Below are excerpts from the report:

Last November, a mass meeting was held in the school auditorium, attended by several hundred citizens and residents of the community; and after a full and open discussion, it was unanimously ordered that proceedings for incorporation be instituted, tentative boundaries of the proposed city were decided upon … and a representative committee of some 30 residents was appointed and authorized and instructed to institute and conduct proceedings for incorporation.

That many advantages will be attained by incorporation is readily apparent to those who are daily present during the whole year or the entire winter season and who may be denominated permanent residents and to many who may be here only part of the time.

The distance of Palm Springs to the county seat and the necessity of submitting most of its governmental problems to county officials busy with other matters and far removed from the community and sometimes unfamiliar with local need is an ever-present disadvantage that will be largely removed by incorporation.

It is significant that the largest property owners and the heaviest taxpayers in the community are members of the committee and are strongly in favor of incorporation.

The city was incorporated on April 20, 1938. Seventy-five years to the day of that event, residents of Palm Springs will gather at the O’Donnell Golf Course for a celebration, “Thanks for the Memories: Palm Springs Through the Decades,” featuring live entertainment and cuisine from the best restaurants in town.