To understand exactly how famous Steve Chase was, hear this: In the late 1980s, legendary former first lady Jacqueline Bouvier Kennedy Onassis, multimillionaire oil magnate Armand Hammer, and the man himself were among the handful of well-heeled passengers awaiting takeoff from New York City to Paris on the Concorde. Upon glimpsing the trio, the flight attendant excitedly exclaimed, “Oh, my god! You’re interior designer Steve Chase!”

Then in his late 30s, the desert-based Chase — with his lanky frame, bronzed skin, and silvery coif — effortlessly exuded star quality. But his worldwide notoriety came courtesy not only of his countless celebrity and corporate clients (for instance, he designed the interior of the first Lear jet) but of his numerous appearances in Architectural Digest. By the time of his 1994 death to AIDS in Palm Springs at age 52, Chase’s image and work had been splashed across that glossy almanac’s pages more than any of his contemporaries’.

Born in New Hampshire but raised in Southern California, only-child Stephen Barrett Chase evinced an innate flair for design at an early age. After graduating from Providence’s Rhode Island School of Design and also the Art Center School in Los Angeles, he was recruited in 1967 by the distinguished desert designer Arthur Elrod to join his eponymous Palm Springs firm. It was there that Chase began to hone his signature, contributing to the creation of the crisp yet opulent California style, whose cornerstones include the showcasing of natural elements such as wood, granite, glass, and leather. When Elrod died in an automobile accident in 1974, Chase remained with the practice until 1980, when he broke out on his own, quickly rising to great, lasting heights.

Retired Palm Springs Art Museum chief curator Katherine Hough — who holds an undergraduate degree in architectural interiors — worked alongside Chase at Arthur Elrod Associates, and the two developed a fast friendship lasting more than 20 years. “He was just an extraordinarily creative, outstanding person,” she says. “Not your average kind of guy at all. He’d walk into a room — dressed beautifully, with great style — and have this presence that no one else had. No one could keep up with him. He was go, go, go. Always openly gay. A real individual. A leader. Never a follower.”

Hough also remembers how the exceedingly generous Chase would give Alaskan cruises or trips to Hawaii to his staff as a Christmas bonus. This magnanimity extended to Hough in the form of a promise he made to her early on in her tenure at the museum.

“Steve was a designer who liked to choose every single object in a client’s home, including all the accessories and all the artwork,” she recalls. “He worked with a few major art galleries in New York, Chicago, San Francisco, and Los Angeles. He would select contemporary art and encourage clients to buy it for their home — or homes. At the same time, he started collecting himself for his own residences. He told me he wanted to build a considerable collection that would complement the museum’s — one that he would eventually leave to the museum. And that’s exactly what he did.

“Through the two decades we knew each other,” she continues, “he would always check in with me. He didn’t want to duplicate work we already had. He’d say, ‘I won’t buy such-and-such artist if you already have a really great example of them.’ Later, when he became a member of our Contemporary Art Council Acquisitions Committee, if the museum could afford to purchase only one of a selection of desired works, he would buy the others, knowing that one day they would eventually make their way back to us.”

True to his word, Chase bequeathed 132 works of art — ceramics, glass, sculpture, and paintings by artists such as David Hockney, Ellsworth Kelly, Helen Frankenthaler, Ed Ruscha, Sam Francis, and Nathan Oliveira — to the museum. He also left $1.5 million to literally raise the facility’s roof and build a third floor. The Steve Chase Art Wing and Education Center was dedicated in November 1996.

“Without Steve Chase, we’d probably still be a natural science museum with desert animals and desert dioramas,” says Hough of the institution that began as the Palm Springs Desert Museum in the ’30s. “His collection launched us into a different realm, quality- and quantity-wise. It brought us into a new era. That’s when people — donors, other collectors — started taking us seriously.”

The Living Desert Zoo and Gardens

The only paintings Chase did not bestow upon the Palm Springs Art Museum were the 49 tableaux in his collection of plein air landscapes by 23 California impressionists. Those he donated to The Living Desert Zoo and Gardens, another organization in which he believed and on whose board he sat from 1989 until his death. The value of his gifts — some $2.5 million —enabled the organization to erect not only its Eagle Canyon and Meerkat Café but also the Stephen B. Chase Administration Building.

“We are honored to have been the recipient of Steve Chase’s generosity,” says Allen Monroe, president and CEO of The Living Desert. “His contributions, vision, and support helped a young organization grow on many levels. His legacy has helped set us on a path to become the education and conservation leader we are today.” 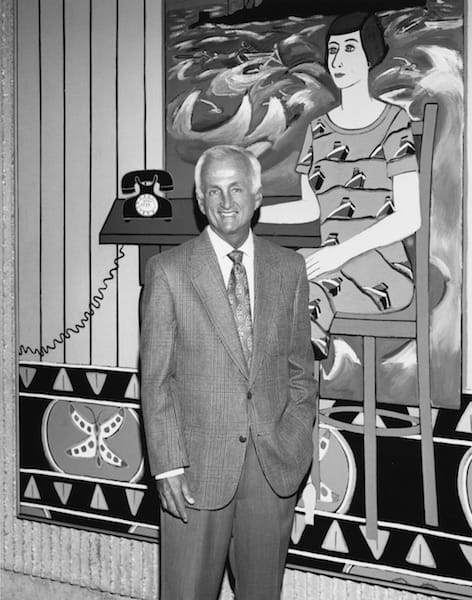 Steve Chase stands in front of a Joan Brown painting at the Palm Springs Desert Museum, 1993.

They say good things come in threes. Another charitable agency upon which Chase left his mark is Desert AIDS Project (DAP). “Prior to his involvement, we were in a church basement, so to speak,” says David Brinkman, CEO of the nonprofit, which was founded in 1984, and on whose board Chase also sat. “We were in the warehouse district of the city in very meager facilities that did not reflect how people who were living and dying with HIV should be surrounded and treated. In those early days, even powerful men like Rock Hudson, who were very accomplished, were in hiding, shielded from the public, because they were wasting and covered in KS lesions. Steve was not that person. He had the extraordinary courage to get out of the house, take meetings, and spend time shopping with and for his clients, many of whom were deeply moved by his spirit.”

One such client was Joan Kroc, third wife of McDonald’s CEO Ray Kroc. She routinely used Chase’s singular services — conveniently, they were neighbors at Thunderbird Cove in Rancho Mirage. “Legend has it that shortly after Steve’s death, Joan arrived at her desert home from her house at the beach to find that a bighorn sheep had apparently used its horns to break through a plate-glass window and had happily munched on the back of a sofa Steve had designed,” Brinkman says. “Joan, taking this as a sign she was done with the desert, donated the house and everything inside it to Desert AIDS Project in memory of Steve.”

When volunteers from Revivals, a local thrift store chain that supports DAP, came to the house to box up its contents, they found a shiny Rolls-Royce still parked in the garage. Calling Kroc inform her the car had been left behind, and to ask how they should return it to her home in La Jolla, they were told, “When I said I’m giving you everything, I meant everything. The car’s yours!”

“The Kroc gift was the seed money that permitted DAP to purchase its current campus at Vista Chino and Sunrise Way,” Brinkman continues. “All of a sudden, because of Joan and Steve, there was a true medical home for people with HIV.”

In recognition of what Chase did to change the organization’s fate and that of its clients, DAP named its most important yearly benefit after him. The 25th annual Steve Chase Humanitarian Awards take place Feb. 9 at the Palm Springs Convention Center.

“Steve exemplified the power of leveraging one’s life’s work and community of clients and friends to do something greater than [oneself] for humanity,” Brinkman concludes. “He understood the art of giving back, and more than a quarter-century after his death, his legacy is still very much alive.”