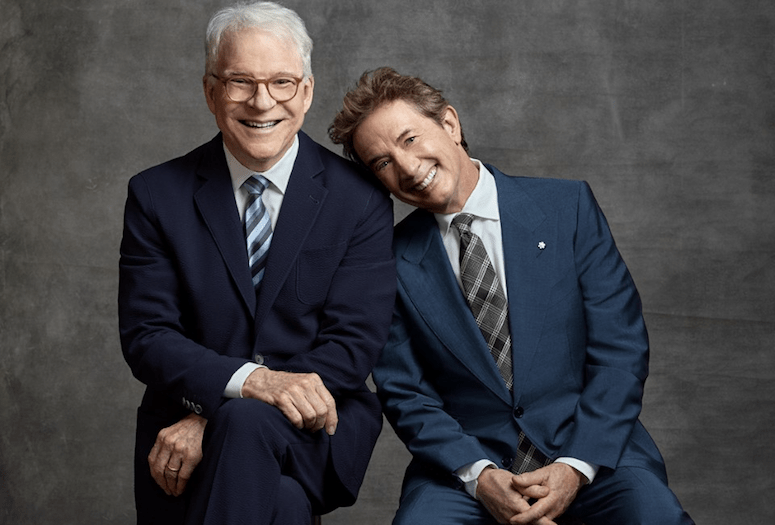 Comedy mastermind Groucho Marx once quipped: “When you’re in jail, a good friend will be trying to bail you out. A best friend will be in the cell next to you saying, ‘Damn, that was fun.'”

It’s easy to picture Steve Martin and Martin Short in such a scenario. The duo have been collaborating off and on for more than 30 years, making them one of comedy’s most inventive partners in crime alongside Mel Brooks and Carl Reiner, and more recently Tina Fey and Amy Poehler.

The enterprising gents bring their “Now You See Them — Now You Don’t Tour” to Fantasy Springs Oct. 5. It’s as nuanced and highly energized as you might expect — a mix of playful banter and inquiry here; some storytelling and music there. Actually, the show features Martin’s band, Steep Canyon Rangers, which has released four chart-topping banjo music albums and happily took home a 2010 Grammy Award.

“We’re both professional musicians,” Martin notes. “Marty is a great singer, he’s been on Broadway and may have received a Tony.”

“I was nominated twice,” Short immediately interjects. “But I lost to some hack.”

And so it goes, a spitfire conversation between two friends.

The Backstory: Martin and Short met on Saturday Night Live (SNL) in the latter half of the 1970s. Martin had already found fame in the comedy world with an Emmy for writing (The Smothers Brothers Comedy Hour) and four comedy albums — 1977’s Let’s Get Small was a gut-busting endeavor, selling 4 million copies and winning two Grammy Awards. Short also had collected Emmy for writing for SCTV. Like Martin, his appearances on SNL fueled his growing popularity.

And then came the comedy film, Three Amigos, in which the two starred.

“It was pretty immediate,” Martin says of their friendship. “You know, in show business, you don’t know if you’re going to see a person again, because you could be doing different projects. We got tied together.”

“We made a concerted effort to see each other,” Short chimes in. “You do have to make a choice like, ‘I don’t want to lose that person,’ and I think we both felt that. But good friendships are good with anyone whether you’re a comedian, or in show business or a dentist.”

“Yeah, but you only like being friends with celebrities, right?” Martin interjects.

Short laughs. “That is true. If you’re not famous you can’t really get near me and I have people that make sure that doesn’t happen.”

The duo appeared together again onscreen in Father of the Bride and its sequel. They both kept busy over the decades — on stage and screen. Last year, they joined forces for the Netflix special Steve Martin and Martin Short: An Evening You Will Forget for the Rest of Your Life. They took it on the road and Now You See Them – Now You Don’t is an updated version of that show.

“It’s a joke,” Martin says of the current show’s title. “Some people take it literally — that we’re dead. It was meant to be amusing.”

“Self-deprecating as we like to call it,” Short muses.

“You do have make a choice like, ‘I don’t want to lose that person,’ and I think we both felt that. But good friendships are good with anyone whether you’re a comedian, or in show business or a dentist."

Martin: “Yes, our new show title really is The Funniest Show in Town at the Moment.”

Short: “Or maybe, The Stuff that Legends Aren’t Made Of.”

We’ve entered the flurry of Martin/Short zone here. But there’s an endearing side to these two and you get the sense that yes, their friendship is tight, but that there is also something bigger at work. Bigger than the two of them. Not many “acts” manage to evoke a sense of wonder that also allows others to lose themselves in the present moment. Maybe comedy does that.

Certainly Martin and Short do.

“We enjoy ourselves onstage,” Short admits. “Sometimes you go to Broadway and it can be so dark and dense and people are sobbing, but for us, this is really fun and we’ve never not enjoyed it.”

“We have a special relationship together where we bounce off each other that I can’t do when I’m performing alone or with our band, who’ve been very funny but they’re very funny because they’re stoic,” Martin quickly adds. “But here I have a real professional comedian to bounce these lines off of and it’s fun. I never really had that in my life.”

“You’re always with someone who has the perfect timing,” Short says of Martin. “You can get spoiled by it quickly but I tell you, I was in shows where the understudy comes on and you go, ‘I’m going to kill myself. When does the other person get back?’ Steve’s comedic timing is perfect — always. He likes to work the way I like to work, which is very methodic. We do a piece, Send in the Clowns. We spent forever working on it — these little details — and both of us were intrigued by the process of it.”

When told that it’s quite obvious they are both comedy legends, Short politely offers, “Why, thank you.”

Martin pipes up: “People do say that but I think they say because we’re old. Well, Marty’s not old, I’m old!”

Experience Steve Martin and Martin Short in the Now You See Them — Now You Don’t Tour at 8 p.m. Oct. 5 at Fantasy Springs Resort Casino, 84245 Indio Springs Pkwy in Indio. For tickets and more information, visit fantasyspringsresort.com.