From the 1971 film, Le Mans, actor Steve McQueen had a home in Palm Springs during this time.
PHOTOGRAPHS COURTESY DALTON WATSON FINE BOOKS

When he turned 40 in 1970, Steve McQueen figured Father Time was not on his side.

Despite a film career that commanded top dollar in Hollywood and a 14-year marriage to Neile Adams and two kids, McQueen was restless.

“He was pretty much fooling around with every actress in Hollywood. He was just trying to cram everything into his life,” says Marshall Terrill, author of eight books on the film star who owned a pair of homes in Palm Springs over a span of 15 years.

In an interview Terrill did with legendary stuntman Bud Ekins, who was McQueen’s stunt double in The Great Escape, he asked why “The King of Cool” had to stray. “He goes, "You know, I asked Steve about that,” Ekins told Terrill. “Steve said, 'Look, I'm 40 years old now. My mom died when she was 50, my dad died when he was 50, and I'm going to die when I'm 50. That means I've got 10 years to live it up.'"

McQueen did, in fact, die 10 years later from cancer at age 50. Like some other celebrities who were cut down in their prime — James Dean, Elvis, and John Lennon — McQueen continues to fascinate us.

“There's something to the fact that when people die at a young age, it makes us wonder how would they have gone on with their lives,” Terrill says. “We've seen Marlon Brando get older and die. We've seen Paul Newman get older and die, and there's no intrigue with those people. We saw how their lives played out.

Terrill recently released a new book, Steve McQueen: In His Own Words, containing 547 photographs and written as if the actor did it himself by using a collection of more than 450 quotes from interviews, published articles, personal letters, and audiotapes. Terrill speaks more on McQueen, the book, and his Palm Springs connection with Palm Springs Life. 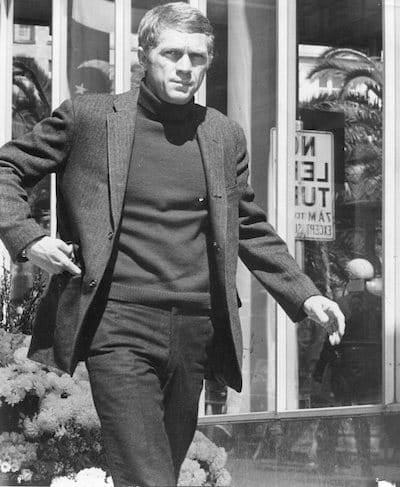 Steve McQueen from the 1968 film, Bullitt, which grossed more than $40 million.

Was this a book you had in mind or did it just come together on its own?

I started seeing a lot of these other McQueen books that would come out one or two a year, and they would just be retreads of the same old information. I kept thinking, "Wouldn't it be interesting if Steve McQueen were allowed to tell his story in his own way, strictly in his own words with no biographer doing the narrative, and just allowing the reader to take in his words and read these quotes chronologically as he said them so that they could get a better insight into the man?" Then it took six years just to put it all together.

Where did you pull the quotes from, and which McQueen quotes resonated with you?

The sources came from every place. I've done so much research on him, and I've just collected it over the years, and I put it away in boxes. What I did was I underlined every quote that I ever came across. Then I started typing it in and putting it together in a way that made sense.

The first quote appeals to the journalist in me. The quote is, "There's nothing in the world I don't want to know." He said that because he was referring to the movie industry. He said, "I want to learn every aspect of this film industry." For example, he studied how the cinematographer would light. He would study how the editor would cut films. He studied the distribution end so that he could get the best deal possible for himself. That quote comes from that reference. I just love that idea that he wasn't a guy that was just going to be an actor, and then just tell his agent to get him the best deal possible. He wanted to know how everything worked. The second quote appeals to the cynic in me. A reporter asked him, "What has success done for you?" His quote was, "What has success done for me? Hmm. I seem to have a lot more friends."

Yeah. There was a touch of cynicism with him because he was always wondering what people wanted from him and why they made such a fuss over him, because he was a kid out of reform school. Now he's in Hollywood and everybody wants to powder his nose, and it made him very, very paranoid.

You said you looked at thousands of photos. Did any of them catch you by surprise or were hard to find?

The one that sticks out in my mind is of Slater, Missouri, and it's of the circus. When he first ran away, Steve McQueen ran away with the circus. I always thought that was a bit of mythology. When I did my book on Steve McQueen: The Life of the Legend in 2010, I actually interviewed somebody who said the circus had boxing matches, and he said, "I saw Steve watch the boxing matches, and I wanted him go into the canvas ring, and then go to the other side, and then start talking to somebody with the circus." He goes, "I never saw him again." That verified in my mind that he actually did run away to the circus. 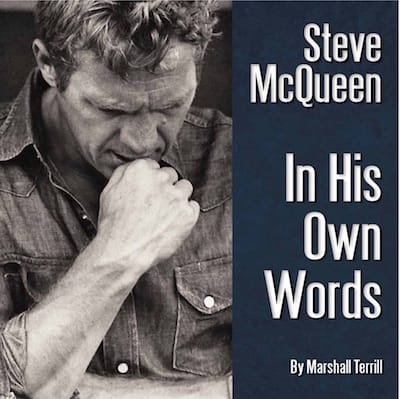 Why did McQueen come to Palm Springs?

He came to Palm Springs in 1963, like many stars did back then just to unwind, drink beer, and ride motorcycles. His first house was at, I think it's 811 Grace Circle. There's a funny story about that. There was a contractor that wanted to come out and build his pool, and he was going to say, "I built Steve McQueen's pool," to get business. McQueen being McQueen took advantage of the situation and had him build a pool almost the entire size of the back yard. There was no room left. I like that story because that illustrates really who McQueen was.

He built his next house on Southridge.

He had a lot of money coming in from the film, Bullitt. I believed the film grossed them $42 million in 1968 dollars. I think his company at the time got 42.5 percent of that film. I think he earned $8 million in 1968 dollars, which probably would be four times the amount today, right? I interviewed Hugh Kaptur (who designed the home) and talked to him about the house. He said McQueen wanted a bachelor pad of his own that said, "This is strictly a guy's pad," even though he was married. One of the funny stories about Southridge was that he had what they call a half track. It was half tank, half car. He rode that tank up the side of that mountain that's near Araby Trail. I remember in the ‘90s going to Palm Springs, and I could still see those tracks. I don't know if you can see them now, but for years those tracks remained. A acting buddy, Don Gordon, told me that McQueen was such a fun guy, he took that half track to a drive-in movie theater there in Palm Springs, and he said, "How can you not have fun with a guy like that?"

The best story may be when McQueen met Mel Haber of Melvyn’s.

It was opening night. I think it was October in 1975. Nothing is really happening in Palm Springs but because Melvyn’s was opening, that was the happening. Everybody who was anybody came there that night. Mel took a smoking break outside, and up comes this heavily bearded, mustached guy with a beautiful woman (his second wife Ali McGraw) on the back of his motorcycle. McQueen at that time looked like a biker. Mel knew that the cream of the crop, a bunch of captains of industry and industrialists were inside his restaurant. It was a tuxedoed crowd. McQueen rolls up looking like a biker, and Mel said, "Please, buddy, any night but this. Can you come back another night and I'll buy you a drink?" McQueen just smiled at him, gunned the throttle, and took off. Mel got a lot of mileage out of that story.

People ask me all the time, "Do you think you would have gotten along with Steve McQueen?" I say, "Probably not. 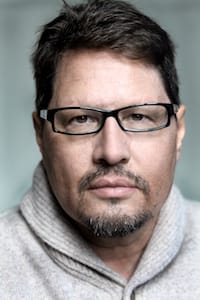 It started for me with my dad. My dad was the original McQueen fan in our house. When I was younger, he'd take me out of school, we'd go watch a McQueen movie together, or when it came on television, we'd sit down and watch it together. He didn't tell me till a couple years ago. I said, "Dad, when did you start liking Steve McQueen?" He goes, "Oh, I was original fan of (the TV series) Wanted: Dead or Alive. That's when it started for me." Then he watch him throughout his whole career. He passed his love of Steve McQueen, as he did of Elvis Presley, to me. McQueen is really not my generation. I came of age in the '70s. McQueen was obviously the '60s. I'm a big Beatles fan, as you know. I'm a big fan of the '60s. There's just so much great art, great artists and creativity came out of that decade. In the '70s, I was listening to stuff in the '60s, and I was considered the weirdo in school.

Did you think it would be a one-book thing and you would move on?

I did. When the original book came out in 1993, I thought it would be like... Humphrey Bogart in the '70s has his renaissance. He had his one and done and he was gone, and I thought it was going to be the same thing for Steve McQueen. He's have his renaissance. He'd have his turn in the sun one more time because people would remember him, but then it started going on almost forever, and then he got bigger and bigger.

What is a common question people ask you about McQueen?

People ask me all the time, "Do you think you would have gotten along with Steve McQueen?" I say, "Probably not. He held a real healthy disdain for journalists." I don't like being around suspicious people because they make you uneasy. I've been around a lot of movie stars and sports celebrities who are like that. They just make you feel very uncomfortable. He is an intriguing figure, that's for sure.

What are you working on now?

I got the Billy Graham biography coming out now with Greg Laurie. That's coming out in April. 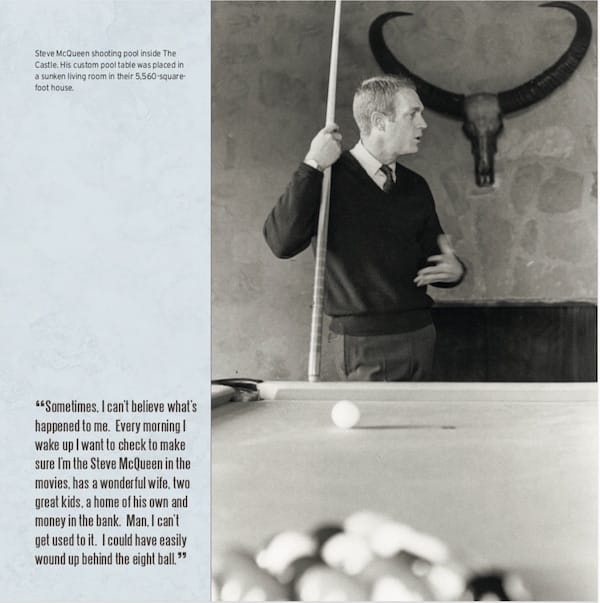 A page from the book, Steve McQueen: In His Own Words.

And the next McQueen book?

I plan on doing a McQueen A to Z encyclopedia. That's never been done. It allows me to use information that I wasn't able to tell... I could say, "McQueen had a friendship with so and so." McQueen actually tried to give (the late Doors leader singer) Jim Morrison a break in the film industry because Morrison was drinking and drugging pretty heavily. McQueen was friendly with the owner of the Whiskey A-Go-Go. His name was Elmer Valentine, and the Doors played at the Whiskey all the time. Elmer asked Steve to give Jim Morrison a movie audition for a movie that he was producing, and it didn't work out. That actually went to Michael Douglas instead. It was Michael Douglas' first starring role. Just little tidbits like that that don't fit the narrative of the McQueen story, but they are just ways that I can fill in those gaps.

To obtain copies of Steve McQueen: In My Own Words, visit amazon.com.