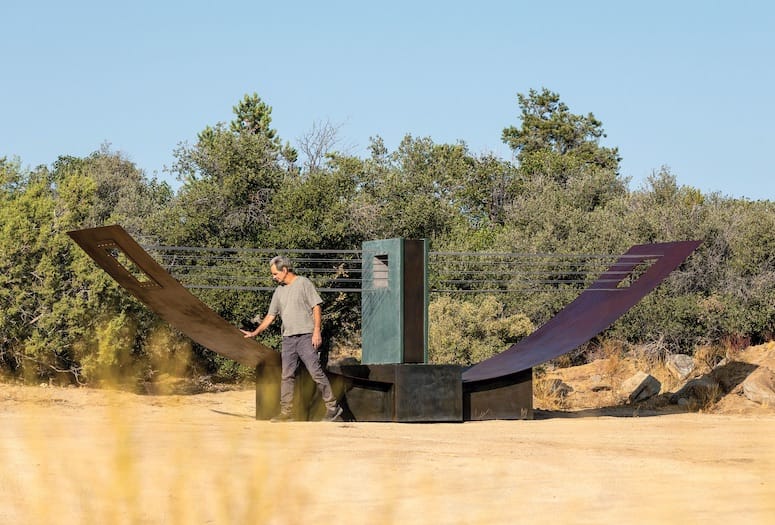 Since 1992, Steve Webster has been the go-to guy among Coachella Valley architects, interior designers, and contractors who require a one-of-a-kind showpiece.
PHOTOGRAPH BY LANCE GERBER

In his 3,500-square-foot home studio and workshop in Pinyon Pines, artist Steve Webster is a long way from his Canadian roots. But only measured in miles.

During high school, he learned traditional wood-carving, building boats and perfecting an honest hand-cut dovetail. During his 20s, Webster added clay, steel, and stone. He worked on a smaller scale then and didn’t use Computer Numerical Control (CNC) machinery, which he now considers as viable a tool as a chisel. “Technology is not sacrilege,” he says. “It’s a way of getting to something that would otherwise be difficult to get to.”

Since 1992, Webster has been the go-to guy among Coachella Valley architects, interior designers, and contractors who require a one-of-a-kind showpiece. From a curved bar fronted by glass to a 12-foot conference table for the Agua Caliente Band of Cahuilla Indians tribal administration building, the custom furniture Webster creates is the practical and artful way he funds his stunning sculptures.

“Something about a thousand-pound boulder bouncing up and down is really quite fun,” Webster muses of his Suspended Boulder. “It shouldn’t happen.”

The works are more than fun. Webster considers himself as much of a scientist, engineer, and historian of materials as he is an artist. The “unseen forces that frame up our universe,” including gravity, nourish his mind with fresh ideas. Yet ideas, for Webster, come attached with a commitment to follow through. “If you don’t make them, who else is going to?” he asks. “There is a lot of art that was never made. And we never will see it. If you have the idea, you have to say, ‘I want to see this become real.’ ”

Webster has installed several works in the sculpture garden of Melissa Morgan Fine Art on El Paseo in Palm Desert, including the 24-foot-long piece titled The Weight Of Water (shown above).

• READ NEXT: Many Passions Inform the Art of Owen Masterson.