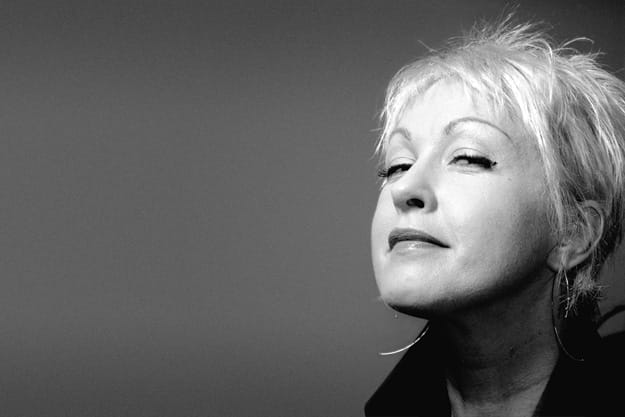 Cyndi Lauper is gushing about her love of theater when suddenly one of the zillion thoughts zipping through her colorful psyche forces her to pause mid-sentence (this happens often) and skip delightfully down another path.

“You know,” Lauper says with a dreamy sigh, “my friend Skipper lived around the corner from me in Queens when I was 5, and we used to put on a lot of plays with cardboard boxes and things. I used to do my impersonations of all the stars [and] sing all the Broadway music my mother had on records. We never went to a play because my family could never afford it but …”

Lauper has yet to expound upon her trifecta — bestselling author, reality television star, and Broadway goddess — not to mention headlining Evening Under the Stars, the lavish AIDS Assistance Program fundraiser — but reeling back the pop music icon proves challenging.

“There were times when I worried I wouldn’t be good enough,” she continues, noting her decision to become composer and lyricist for Kinky Boots, the highly anticipated Tony-worthy musical penned by Harvey Fierstein that opened on Broadway to glowing reviews. “Harvey kept telling me, ‘Just let your brain go. There are no rules.’ Could you imagine somebody saying that to you? Oh, OK. No rules? I’m in.”

Beyond Lauper and Fierstein, a four-time Tony-winner, Jerry Mitchell (La Cage aux Folles, The Full Monty) is on board as choreographer and director.

“I loved that it was a real story, and about a guy that thought outside of the box and saved jobs,”
Lauper says.

Based on the 2005 cult film of the same name, the musical — think Billy Elliot by way of Recession-era La Cage au Folles — chronicles the unlikely business partnership of Charlie (Stark Sands) and Lola (Billy Porter), a transvestite and entertainer whose flashy stilettos spark an idea to, fittingly, reboot the beleaguered shoe company Charlie inherited from his father.

From the get-go, Lauper was impressed with the blue-collar storyline. “I grew up near the Singer sewing machine factory and Gordon’s Milk factory,” she says. “And you gotta understand, I came up in the ’80s, right? Everyone was wildly creative. But somewhere along the way, corporations came in, and it became more about the celebrated record company person and not the artist. So it was very difficult to create anything.

“The guys in suits came in, and it was like, ‘You’re going to have braces on the brain.’ So here comes this story from Harvey about integration. OK, one guy wears a dress. But who gives a shit? It doesn’t matter. It’s our differences — our differences — that make us stronger. And that is what hooked me: Here’s a guy [Charlie] in a day and age where people are losing everything, and he was open enough to think outside of the box. It solved everything.”

To prepare, Lauper immersed herself in a glut of film and stage musicals — from West Side Story to South Pacific — and delved into new musical territory as well. “Harvey was saying, ‘Listen to Rigoletto’ [the Giuseppe Verdi opera]. I thought, ‘Rigoletto? OK? Let me download Rigoletto.’ I wanted a piece of all of the musicals that I freaking loved so much.”

Maybe it’s that kind of she-bopping tenacity that initially sent Lauper’s celebrity soaring in the ’80s. Her solo album, She’s So Unusual (1983), nabbed a Grammy for Best New Artist and made her the first female to boast four top-10 singles from a debut album (“Girls Just Wanna Have Fun,” “Time After Time,” “All Through The Night,” and “She Bop”). Thirty years later, after 14 Grammy nods, seven American Video Awards, and two American Music Awards, Lauper’s global record sales exceed $30 million.

Last fall she added New York Times best-selling author to her list of achievements. Cyndi Lauper: A Memoir captured her eclectic voyage through music and life. “The biggest surprise was that it got done,” she quips. “And I ain’t winding down. I’ll give you that.”

Enter: Reality TV. Cyndi Lauper: Still So Unusual debuted in January on WE TV, sporting a mix of humor and grace.

Sharp Focus on Giving Back

Long before the performer’s troika of success, AAP’s Executive Director Mark Anton wanted her to headline Evening Under the Stars. Like millions of people, Anton grew up listening to Lauper’s music and appreciated her civil rights advocacy. “I am just blown away that we have somebody of her caliber who supports the cause,” he says.

Initially, Lauper thought the outing was related to White Party events, at which she performed in the past. “When I found out it was an AIDS/HIV benefit, I immediately said yes. AIDS is still around. Young kids think they are immune — ‘Oh, it’s all gone, we can live with the medicine.’ Well, I know people living on medicine, and sometimes it’s hard for them. Quality of life may not always be so fabulous.”

AAP has evolved appreciably since 1991, when the late Gloria Greene and Jeannette Rockefeller began offering meals to low-income locals living with HIV/AIDS and Evening Under the Stars began, literally, in somebody’s back yard in 1993. Today, private donations, local business support, and grants fund 100 percent of the organization’s expenses. The gala’s profit covers up to four months of AAP’s food vouchers, which cost approximately $50,000 per month.

Lauper, a longtime, fierce patriot in the battle to end the HIV/AIDS pandemic, is a perfect fit for the event. Five years ago, she turned heads by co-founding True Colors Fund — inspired by her hit single “True Colors.” The foundation’s mission is to engage individuals, “especially straight people,” as its website notes, “to become active participants in the advancement of equality for all.” One of its main tasks is to raise awareness about and eradicate LGBT youth homelessness.

“I had thought straight people were going to say something about the issue, but nobody was opening their mouth,” Lauper says about launching the foundation. “What — you’re not going to stand up? What about all the brothers and sisters and uncles and what have you? Stand up and say, ‘Hey, these people are part of my family. You can’t mess with my family!’”

Lauper’s sister, Ellen, is gay. “Basically, you’re not going to be losing me any time soon,” Lauper says.

Nor is the 59-year-old performer about to stop waxing philosophical. “You know, life affords you the opportunity to step up,” she says. “Maybe not the first or second time, but by the third time, you have to show up. We have all these lessons to learn. And it’s fun. But when it sucks, no matter what’s happening, you just have to turn in and focus on all the wonderful stuff — even if there’s very little of it.

“I am trying to do good,” she adds. “And you don’t always do great. But so what? You can’t stand in the same spot every time. What would happen if you were to move over and enjoy a different spot; see what that’s like?