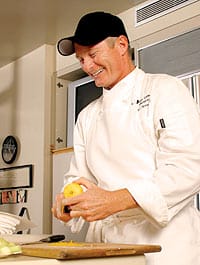 Standing at his host’s front door holding a knife and accompanied by two knife-wielding companions, Bob Thomas remarks on the oddity of the situation. This would be no typical dinner party.

Inside, personal chef Tony Thomas readies the kitchen for a cooking-lesson-for-six in Ron McGraw’s Las Palmas residence in Palm Springs. His preparations began earlier that day when he shopped for food. “It usually takes me about two hours,” he says, explaining that he begins with a warehouse-style store, then follows at a specialty store, and finishes at a standard grocery store.

A culinary graduate of Georgia’s Art Institute of Atlanta and United States Personal Chefs Institute, Thomas moved to the desert a little more than a year ago and has clocked hundreds of hours in other peoples’ kitchens preparing them weeks’ worth of meals. More recently, he began offering personalized, in-home cooking classes.

“Break into pairs, preferably with someone other than who you came with,” he instructs his students du jour: Thomas, McGraw, Dennis and Carol Carroll, Roberta Temple, and Sharron Stroud, all of Palm Springs. They don aprons, tuck small towels into them, and — at Thomas’ direction — lay their knives on the island counter in front of them.

“This,” Thomas says, “is the most valuable tool you have in the kitchen.” He demonstrates the proper method for sharpening a knife (on a sharpening stone) and then assigns recipes for an appetizer and duo of soups: Dennis and Sharron will prepare savory goat cheese puffs, Ron and Carol will stir up a fresh tomato basil soup, and Bob and Roberta will create cucumber and yogurt soup.

Thomas explains the chef’s practice of mis en place, a French term referring to having all the ingredients necessary for a dish prepared and ready to combine. “When you start your recipe, it’s always important to read through it first,” he stresses.

“I’m putting you in charge of the pastry,” Sharron informs Dennis.

As the teams go about their respective tasks, Thomas coaches and sometimes calls their attention to a particular demonstration — such as how to cut an onion efficiently. After cutting half of the onion, he turns the task back to Carol, who needs chopped onion for her soup.

“See how smoothly I’m doing this, folks?” she beams.

Ron and Carol make strides “shocking” tomatoes (briefly boiling them and then plunging them in ice water to make them easy to peel). As Carol cuts a cross in the bottom of each tomato and hands it to Ron, who places it in the pot, they talk about the attributes of different blueberries. Thomas comes by to check their progress. “Perfect,” he says.

Meanwhile, Bob and Roberta cut an onion and cucumbers, and Dennis and Sharron measure goat cheese, Dijon mustard, and spices. The cucumber soup team needs lemon zest but appears unsure how to achieve it. Thomas offers another demonstration: He takes out his zester and shaves the yellow skin of a lemon, cautioning students not to dig too deeply or they’ll get the white pith as well. “I just don’t want to get pithed off about it,” he jokes. Everyone laughs.

Moments later, Thomas says to Sharron, “Why don’t you check and see if the pastry is thawed enough.”

“I put Dennis in charge of pastry, but I’ll look,” she answers playfully.

“I think we’ve got all our mis en place,” says Bob, who likes to bake and seems enchanted with the term he’ll probably use henceforth.

After a brief demonstration on cutting, filling, and crimping the edges of the goat cheese puffs, everyone gives it a try. The appetizers are ready for the oven 90 minutes into the class. When they come out, their sizes differ, but it’s irrelevant in this class. “Oh, they look beautiful,” Carol enthuses. “Oh, look at our cheese puffs!” Sharron says.

Roberta returns her focus to soup. “We want to shine,” she tells Bob. “We’ve got a lot of competition. Now we know what we’re up against.”

Despite her words, Roberta and every other parti-cipant heap words of encouragement and praise on each other’s efforts. Even though they’re in “teams,” they’re all in it together. And they all try their hands at pouring the duo of soups.

With a pitcher of cucumber soup in one hand and a pitcher of tomato soup in the other, they simultaneously pour them into the same bowl. Then, as Thomas demonstrated, they twist the bowl on the counter until the colors form a yin-yang symbol. Then they garnish the green side with red pepper sauce. Thomas used three drops; one student makes a smiley face and another makes a star. “Mine’s an Impressionist soup,” Bob declares.

As the evening progresses, Thomas and his pupils also make a baked shrimp entrée with mixed-colored peppers and feta cheese and, for dessert, “lava” cakes that ooze chocolate.

“I’ve had lava cake in restaurants, and it’s fabulous,” Carol says. “I didn’t know how they do it. Now I’ll know.”

While the individual cakes bake, Thomas — who trained as a pastry chef at the Michelin four-star Bacchanalia in Atlanta — shows them how to decorate the dessert plate by piping chocolate into a flower design and filling the petals with raspberry sauce and the leaves with mint sauce. “We can’t leave until everybody makes a perfect flower,” he says.

“Do you have sleeping bags, Ron?” Bob asks.

They do amazingly well for pastry novices. Carol creates her own design; Dennis points out that she used to be a painter.

The lava cakes themselves don’t pop out of the muffin pan as they should, and Thomas digs into his tool kit of kitchen utensils for something to run along the sides of the cakes to loosen them.

“That’s what Julia Child did the other night with her charlotte russe,” Ron notes. Having watched a PBS retrospective on the recently deceased legend of French cooking, he remarks that even Child had a philosophy about mistakes in the kitchen: “She said that’s one of the joys of cooking.”

As they sit down to enjoy the lava cakes and Thomas’ homemade ice cream, the evening approaches 9 p.m.

“Cooking is a lot of work,” Ron says. “I respect people who enjoy it.”

Those people seem to be his guests.

“This is a fun alternative dinner party,” concludes the man who felt odd carrying a knife to his host’s home.