Mondays aren't so bad when you spend them at the Ace. Join drag queen Bella da Ball for a laugh-out-loud evening at the Ace Hotel & Swim Club in Palm Springs. The night kicks off with bingo at the hotel's King's Highway diner and wraps up with trivia in the Amigo Room bar.

This musical at the McCallum Theatre in Palm Desert draws on snippets of real-life diary entries, documents, and letters to capture the World War I Christmas when Allied and German forces put fighting on hold to celebrate together.

Coachella Valley Repertory puts on Lisa Kron’s theatrical adaptation of an autobiographical graphic novel by Alison Bechdel. The Tony winner is the first Broadway musical with a lesbian protagonist.

Celebrate the most wonderful time of year at Civic Center Plaza from 5 to 7 p.m. as Mayor Ernesto Guttierez illuminates the city tree. The event includes a performance by the Cathedral City High School choir and the unveiling of North Pole Village, a strip of holiday-inspired backdrops for the perfect seasonal selfie.

This half-mile, docent-led stroll welcomes walkers (and their pups) to learn about the native flora and fauna of the desert at Blixseth Park in Rancho Mirage.

Palm Springs Art Museum hosts back-to-back evening lectures on a pair of topics: “2nd Wave Feminist Art” and “The Origins of Life” with speakers Mara Gladstone, deputy director and head of programs at Desert X, and Timothy Lyons, distinguished professor of biogeochemistry in the department of Earth and planetary sciences at the University of California, Riverside.

In its first post-pandemic performance, Joshua Tree Philharmonic presents classic and contemporary music selections for the whole family at the Hi-Desert Cultural Center in Joshua Tree. 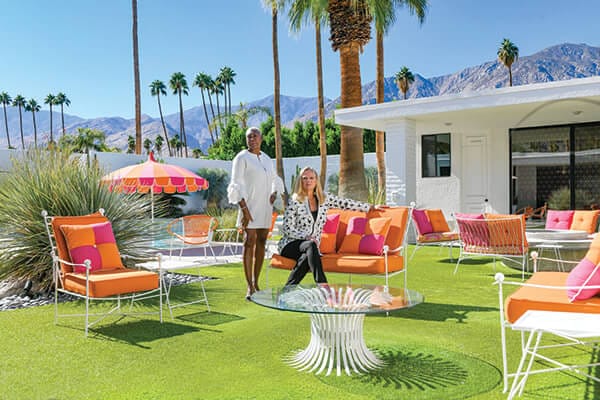 Husband-and-wife photography team Owen Masterson and Christine Anthony set out to capture the essence of Palm Springs through a series of vibrant portraits. View the exhibition on its opening night at Melissa Morgan Fine Art in Palm Desert as you mingle with the photographers and some of their glam subjects.

Thunder From Down Under: Dec. 9

Pink Martini vocalist Storm Large nearly quit music in 2002, but she picked up the mic again at the urging of friends in Portland. See the feisty cabaret artist at the McCallum Theatre.

Desert Ensemble Theatre in Palm Springs presents the world premiere of Jerome Elliot Moskowitz’s holiday play, which centers around mother and son Tammy and Tommy as they face an ill-timed visit from the FBI during Hanukkah.

This three-day festival, now in its eight year, is the first to focus primarily on U.S. Latinx filmmakers. Over 100 films showcasing more than 200 Latinx actors will be shown at the Annenberg Theater at Palm Springs Art Museum. (The majority of films will be presented in English.) The weekend also features a closing reception and will culminate with an awards ceremony in the theater.

A song-and-dance duo follow a pair of singing sisters to snowy Vermont in this romantic musical version of the 1954 classic film. Hum along at Desert TheatreWorks in Indio.

Chase curious clues across a topsy-turvy version of Indio in this virtual game inspired by Alice in Wonderland. Grab a few of your favorite people to play, navigating the city with a smart phone app.

The fervor that rock band Cheap Trick caused in Japan in 1978 has been compared to Beatlemania. The “I Want You to Want Me” singers perform at Fantasy Springs Resort Casino in Indio.

Home for the Holidays: Dec. 10

Head to the Rancho Mirage Amphitheater at Rancho Mirage Community Park for the city’s kickoff event of the holiday season, an open-air production featuring talented local entertainers and musicians from Desert Theatricals.

Local nonprofit Ronnie’s House for Hope stands by its mission to provide free grief support for community members with this evening of remembrance at Palm Desert Civic Center Park.

Sprint or stroll toward the finish line in this charity 5K at Margaritaville Resort Palm Springs, where you’ll find Jimmy Buffet–themed swag and a post-run concert.

Old St. Nick and his elves will touch down at The River at Rancho Mirage from 3 to 6 p.m. for an afternoon photo-op, a raffle supporting Boys and Girls Club of Cathedral City, and a DJ.

Australian classical-crossover supergroup The TEN Tenors returns to the McCallum Theatre in Palm Desert for a holiday show with fun twists on favorites like “Feliz Navidad” and “Winter Wonderland,” all sung in gorgeous 10-part harmonies.

Everyday objects meld with the fantastical worlds of films like The Wizard of Oz in Ben Steele’s exhibition at Coda Gallery in Palm Desert.

Stop by Coda Gallery in Palm Desert to browse David Dornan’s photorealistic paintings of flowers, oilcans, and other subjects, which take on new depth under his observant eye.

Check out Matt Wesson’s knack for capturing the strangeness and charm of life in photos in his exhibition at Compound Yucca Valley.

Shop for every art lover on your list at the Artists Center at The Galen in Palm Desert, where the Artists Council vends 8-inch canvases, ceramics, and other gifts. 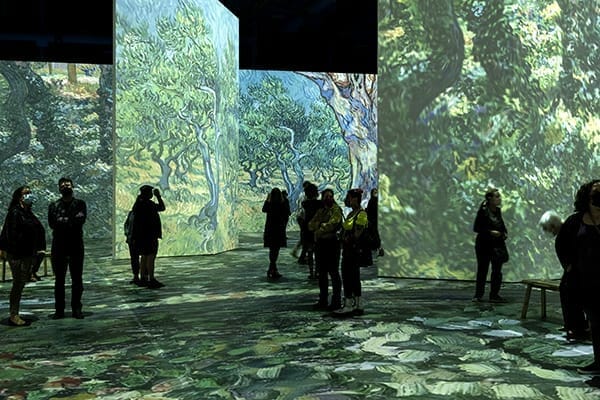 Beyond Van Gogh: Through Dec. 27

Step inside 300 famous Van Gogh artworks at this immersive exhibition at the Empire Polo Club in Indio that projects the artist’s paintings on the walls and floor. It was so popular, event producers extended the exhibition by a month.

The Living Desert Zoo and Gardens in Palm Desert twinkles by night with holiday light displays. Grab a hot chocolate and snap a photo with Santa.

Light + Change: Through May 21

View the formal table settings that the Annenbergs set out to entertain presidents and royals at Sunnylands Center & Gardens in Rancho Mirage.

• READ NEXT: Plan your schedule with our curated calendar of December 2022 events.