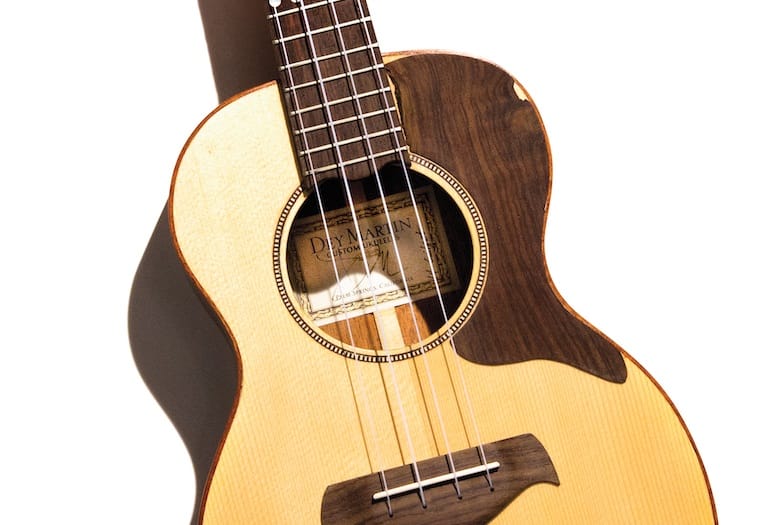 There’s a flicker of boyish pride in Dey Martin’s eye when strings meet wood and he strums one of his hand-fashioned instruments for the first time. To say, “I made this,” after more than 30 years in other realms of the music business, elicits earnest satisfaction.

A child of California in the 1960s — a surfer dude and aspirant rock star — Martin journeyed to Honolulu to study music composition. Between studies, he nurtured his carpentry skills by apprenticing with master luthiers at the Guitar and Lute Workshop.

“It was my introduction to building and repairing,” Martin recalls. “I ended up going into the actual music business … I ran a record label and a small independent music publishing company where I signed bands that went under the radar. Local bands, a lot of them from Palm Springs.”

“I built one for my daughter and she just loved it and showed it to her friends, and her friends showed it to their friends,” he says. “It kind of blossomed and … that’s how it all started.”

Directly translated, ‘ukulele means “jumping flea,” a nod to the lively string plucking that gives rise to the instrument’s bright island sound. The small, offbeat lute originated when Portuguese immigrants arrived on the Hawai’ian Islands in 1879 with a similar four-stringed instrument known as the machete. Its popularity took off on the mainland with the ‘ukulele’s debut during San Francisco’s 1915 world’s fair, the Panama-Pacific International Exposition.

“As time went, and they became more popular, they became cheaper and they were built in a kind of assembly-line fashion,” Martin says. “When I make a ‘ukulele, I pick the most amazing tone woods. I like koa and rosewood and mahogany for the neck, then cedar. And I combine those and I take time to tune the instrument. It makes the old woods come together and complement one another.”

Eventually, Martin outgrew his garage. He now spends three days a week producing his classical and acoustic guitars and ‘ukuleles at a warehouse in San Diego. Nevertheless, he still offers expert repair services and tune-ups from his Palm Springs workspace.

If you’re camping out at the polo grounds during festival season and want to plan a midnight jam session, bring your ‘ukulele. “They’re portable; you can take them anywhere,” Martin says. “A ‘ukulele’s a great thing to bring to Coachella. I mean, unless they don’t let it in the door for some reason … ‘What’s in that ‘ukulele, sir?’”

To order a Dey Martin original or to discuss  instrument servicing, visit www.deymartinguitars.com.

Take your pick, so to speak.

Philomusica
If you’ve considered buying a theremin or a ringing quartz crystal pyramid, this is the place. Musical theorists will enjoy Muzundrum, a music-themed game created by one of the store owners.

Stan’s Music
Not far from Pappy & Harriet’s Pioneertown Palace is a mom-and-pop shop selling instruments, used equipment, and amplifiers. Lessons are available, as well as stringed instrument and amp repairs.