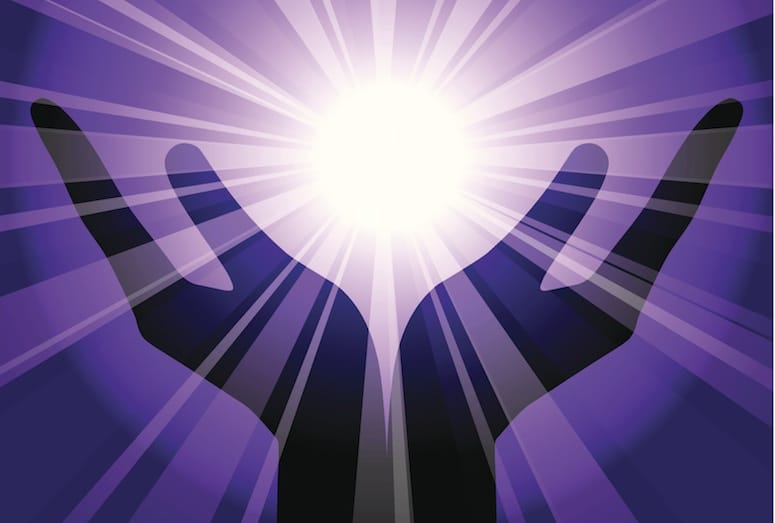 “You have a grandmother who has crossed, correct? Was it Eleanor … no, Ellen — it’s an ‘El’ name.”

And so began my first interview with a medium.

Meet Geoffrey Jowett. His communication with the spirit world, he recalls, started when he was still in the crib. “I remember my grandfathers and four spirit guides who came to me,” he says. “I told my parents they had ‘curtains’ on their heads. They thought it was my imagination for a long time.”

Throughout his youth, Jowett continued to experience what he now describes as “my people.” Their presence — sometimes visual, and at others auditory or sensory — was so beautiful, so calming that he never felt afraid.

“They helped me understand that there was a dimension beyond this dimension,” he explains. The self-described intuitive medium — that is, a psychic who claims to see auric fields around other living things and receive flashes of insight from those have died — began working with the spiritual community of Lily Dale, a renowned hamlet for mediums and healers in New York, to help him realize his potential. Such figures as Deepak Chopra and Dr. Wayne Dyer have spoken there on many occasions.

As a teenager, Jowett says he shunned his gift. “In college, I started opening up about it again,” he says. “My friends would sit there with a Ouija board and I’d be like, ‘No, no, don’t play with that. Come sit, and I’ll teach you how to feel their energy.’ ”

Wanting to understand the essence of life on the smallest level, Jowett pursued a degree in molecular biology and went on to become a professor, and eventually a dean, in the field of science. “One of my big moments came when I was working on a cadaver with some friends who were pre-med: It was surreal to see that the body had everything it needs to sustain life, but I knew there had to be another force or power — a soul — that wasn’t present,” he says. He believes that DNA stores spiritual information as well as genetic information.

In recent years, Jowett left his career in academia to devote himself full-time to readings and spiritual healing.

“In my whole career path, I was learning and understanding the total body — the physical body, the electromagnetic field around it called the etheric body, the emotional body, the mental body, and the soul body,” says Jowett, who uses his mediumship for multiple purposes. “As an intuitive medium, I’m interested in helping clients understand their soul’s purpose.”

This means pulling all of those bodies together to align the seven chakras. (He put some of this practice into words in a book titled The Power of I AM: Aligning the Chakras of Consciousness, published this year by Divine Arts Media. Prior self-published books include Hope for Parents Who Have Lost Children and What’s Cooking in Heaven Grandma?) It also means communicating with the dead for guidance.

“Who is Al or Allan — an ‘Al’ name on your father’s side — do you have a great-grandfather in spirit?”

Embarrassed at my lack of knowledge about my family history, I concede, “I don’t know his name.”

“I feel like he’s a guardian to you,” says Jowett, relaying my guardian’s message that I should be writing a novel, before turning his focus to my late grandmother, who he’s also specified was on my dad’s side.

He describes her in scenarios typical of most grandmothers: She had short hair. She held me a lot as a baby. She baked sugar cookies (“Hmm, I recall her bread pudding but never any sugar cookies.”) And then he delivers a doozy:

“I don’t get real warm fuzzies from her when she was here,” Jowett says. “She was kind of … cold.” What grandmother isn’t warm and fuzzy? I return his comment, stunningly accurate, with a blank stare and let him continue. “She was very methodical and orderly … a perfectionist … she wants you to be different and live more in your heart than in your head … I asked her to show me an example of your writing … you write in a purple or green — a green — pen?”

I glance down at my hands, which are usually smudged with green ink, the signature color I use to mark up articles as an editor at the magazine — no smudges. I haven’t marked up any papers yet today.

I look over at my notebook, which is beside me on the sofa (I’m recording this interview). Clipped to the top is a black ballpoint pen.

My skeptical mind tries to rationalize how he knows about what he’s telling me, but I can find no explanation. Jowett goes on to relay other insights, many of which I don’t understand, at least not at this time. I wonder if he knows the significance. “They just start throwing stuff at me, and the information doesn’t necessarily make sense,” he explains. “Most of the time, clients will leave not understanding a chunk of the information I tell them. And then later I’ll get an email. It might take you time to figure it out.”

Jowett’s precision and accuracy have made him a reputable source for this kind of thing. “I still get those inquires, ‘Where’s my soul mate? Why can’t I find love?’ What should I do in my career?’ and I can channel their loved ones to help them pinpoint obstacles that are getting in the way of these things,” he says. “I’ll still get calls from friends who will say, ‘Where are my car keys?’ and I’m like, ‘Leave me alone.’ [Laughs.] But the majority of my clients come to me because they’ve just lost a parent or child who has crossed.”

He remembers a visit from a distraught mother whose young daughter was struck by a car while riding her bike home from school, who blamed herself for the accident. “Her mom was supposed to pick her up. But her daughter reminded her, through me, that she was at home making her cupcakes — peanut butter — for her birthday the next day,” Jowett says. “It removed so much guilt from her mom because the daughter helped her understand, ‘Hey, it was my time to go, but you were doing something for me.’”

I’m curious how Jowett channels these spirits, and if they’re ever uncooperative.

“Less than 1 percent of the time, they won’t want to talk,” he says. “And I encourage clients to wait at least six months after someone has passed to try to communicate.” He equates a spirit’s adjustment on the other side to that of a newborn baby in this realm. “It can take them a while to learn to speak.” And when they do, he explains, the sound is like that of someone talking underwater. That’s why he can make out sounds in names without clearly hearing the whole thing.

“Are you always the initiator, or do spirits ever approach you voluntarily to communicate?” I wonder aloud.

“My people will show themselves in specific ways, like a reflection in the mirror or the sound of a bat hitting a ball (his grandmother loved baseball) or the smell of soup,” Jowett says. “But two times, I’ve been woken up by a spirit I didn’t know, and it scared me.”

The first was two summers ago at a hotel in Oregon, where Jowett was overnighting during a tour for one of his spiritual workshops. A little boy woke him up at 3 a.m. “He was cut and bleeding and had an ax in his hand,” he says. “I asked him what was wrong, and he told me his parents killed him while they were camping. I begged him to go to the light, and he said he was afraid that his parents would be there. I told him, ‘Your parents aren’t there, they’re here, so it’s OK …. The next day, I researched on the Internet and found the story of a 7-year-old boy — I think his name was Daryl — who was axed by his parents during a camping trip in Florida about eight months earlier. His parents had been arrested for the crime.”

The other interruption, Jowett says, was by a young man wearing a hoodie who told him he overdosed on heroin. He wasn’t sure where to go. “He was rough, and his energy made me nervous,” he says. “After that, I made a deal with my guides and told them, ‘I don’t want to be woken up anymore.’” That doesn’t mean that Jowett no longer experiences disturbing insights, though.

His brother-in-law, a D.A. — and skeptic about Jowett’s work  — on the East Coast, would tell him about missing persons cases and Jowett would see pieces of the puzzle. “One time, they had a woman missing, and I kept seeing her in a wooded area, and by a creek, and I kept seeing a police car there when it happened,” he says. “Not during the search, but when the crime happened. It didn’t make sense at the time, but a couple of years later they found out a cop had killed this woman and they found her body.”

Jowett has also been contacted for help by relatives of missing persons. In another case, three years old and not yet solved, a Canadian woman disappeared. “I kept seeing her femurs … a burned-down shack … and a blue blanket,” Jowett says. “I also saw two men, from behind; one was big and the other was tall and lean. I think they are father and son, and one is a political guy. I didn’t see them murder her, but I did see them burning down this shack — covering something up.”

Police later discovered the remnants of the shack. Arson. And then they found a blue blanket by a river. “I keep seeing her femurs, so I think someone is going to find her buried there. But they haven’t yet,” Jowett says. “I’m not an expert in solving crimes at all — I’ve had people contact me where I haven’t seen anything — but the few times I have, they’ve been validated.”

Jowett’s work deviates from that of a “psychic” in that he receives only bits of information. “Clients will get frustrated because they want me to tell them when the man is coming, or what to do in certain situations,” Jowett says. “I don’t want someone to rely on me, or their spirit guides, to make their decisions; I want to give a message that is clear and helpful, but I’m careful about not giving a message that makes a choice for a person, because that’s not my role, or their role on the other side. We act as counselors by showing options.”

Jowett takes personal appointments in his Palm Springs office, or by phone, and travels frequently to host workshops in which he helps students channel those in the spirit world. He believes we’re all part of a soul group and can learn how to connect with our soul supporters if we understand the signs.

On leaving Jowett’s office, wanting answers to a few things, I text my stepmom.

“Your grandmother baked the best sugar cookies; she made them all of the time for a school here,” she tells me. I also learn that my great-grandfather on my dad’s side died in an accident in 1969, so I never met him. His name was Alfred.