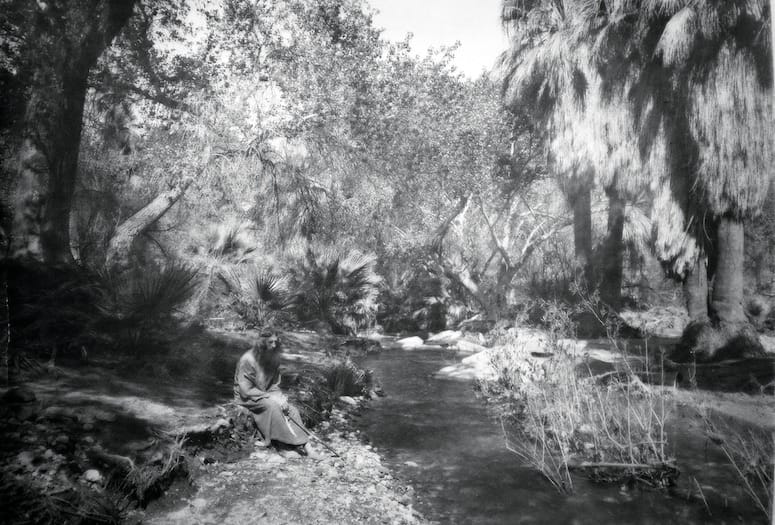 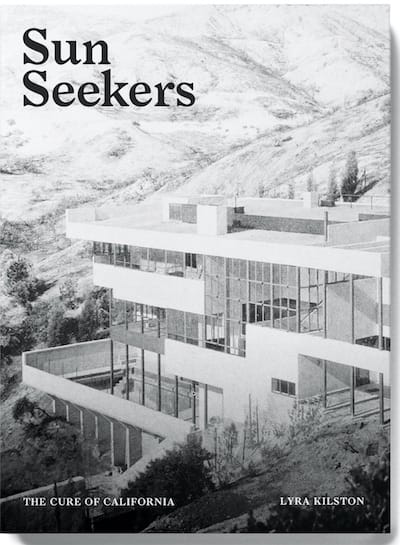 Since the early 1900s, the sun-drenched Coachella Valley has been a magnet for the ailing in search of a miracle climate cure as well as dropouts and eccentrics pursuing a remedy to societal malaise. In the desert, the abundance of sunshine and untamed nature offered refuge and inspiration to the hopeful newcomers — from fervent nature-cure healers to modern architects to barefoot vegetarian hermits — who helped established its renown as a center for healthy, natural lifestyles long before the 1960s boom. The region became an ideal testing ground for unorthodox thinking about healthy living, from diet to fitness to housing.

Sun Seekers: The Cure of California (Atelier Éditions), a new book by Lyra Kilston, revisits these lesser-known histories and unusual characters, tracing the colorful and surprising origins of Southern California’s promise of better health. In this exclusive excerpt, the Los Angeles–based writer and editor introduces one odd, long-haired German immigrant who came to live simply in a canyon near Palm Springs.

Additionally, Kilston will give a talk, “Built for Health,” and sign books at 10 a.m. Feb. 23 at the Modernism Week CAMP Theater.

Sometime after 1906, a strange figure arrived in the desert east of Los Angeles. Seeking an isolated place to settle, he found a lush canyon hidden within the folds of bare, reddish-brown mountains, where a natural spring formed a long winding band of green. Hundreds of palm trees grew along the reed-lined stream, sheathed in thick blond beards of fronds that cascaded to the damp ground. The man set to work gathering palm wood and fronds to build a small hut. Lean, long-haired, and richly bearded himself, this pale-eyed stranger wore homemade sandals and often nothing else. The canyon was home to coyotes, mule deer, quail, and lizards, but he ate no meat. Eventually known as the “Hermit of Palm Canyon,” William Pester had fled civilization to cultivate a solitary Eden. He had come a very long way.

Other than the sound of dry winds in the fronds and the thrumming and chirping of birds, the canyon was enveloped in a profound silence. Away from the muddy banks and cool canopy of shade, a harsh, crystalline sunlight pounded every surface. The jagged horizon of the brown San Jacinto Mountains vibrated against blue sky. At night a million stars blazed. For more than 2,000 years, the Agua Caliente Band of Cahuilla Indians lived in or traveled to such oases to escape the summer heat, which can hit 120 degrees. They gathered water and harvested clusters of black, bead-like fruits from the palms. When Pester arrived on their reservation, he was the only white man among them.

Born Friedrich Wilhelm Pester in a coal-mining town near Leipzig, Germany, in 1885, he left his country around the age of 19 to escape compulsory military service. Pester crossed Europe, the Atlantic, and the United States alone, working as a laborer. We don’t know how he chose this part of California’s deserts, but it offered an alien landscape as different from respectable civic life in Germany as could be imagined. As an early settler recounted, the Mexico-bound train stopped in the middle of the night at the “station,” which consisted of a water tank and a small, white, hand-painted sign that read “Palm Springs.” Pester later told a journalist that he came to California to “study himself with untrammeled nature as his classroom.”

Pester spent his days simply, foraging for food, bathing in a crude bath he dug out of a natural spring, strumming his slide guitar, and exploring the canyons and rocky hills among barrel-shaped cactuses and skeletal, silver-green creosote brush. His meandering walks echoed the movements of local health-seekers in the region who pursued the cure of sun-drenched outdoor exercise. But Pester’s ideas about what needed to be cured were altogether different.

“All man’s troubles, sickness, anxieties, and discontent, come from a departure from nature,” he once explained. “I was never sick, because I obey the laws of nature and my food is simple ... I have little use for money, and I am not bothered by politics or religion, as I have no special creed.” Pester had struck out to cultivate a solitary life in tune with nature. He described it as returning to the Garden of Eden.

Palm Springs, some 8 miles from his canyon, was growing from a scattering of shacks into a small town. Its main boarding house, which had once welcomed visitors with pulmonary ailments, was converted into a reputable resort for pleasure-seeking tourists. To his dismay, Pester became one of the desert’s attractions. He may have fled civilization, but civilization would not let him go. On Sept. 9, 1916, the Los Angeles Times ran a nearly full-page photograph of the long-haired Pester squatting by his palm cabin. “Hermit’s Cabin Built of Palms Near Palm Springs,” the headline barked. In the picture, 10 tourists are standing near him, looking overdressed in their white tailored clothes and clean hats. Soon, the perilous dirt road leading to his cabin was lined with Model T Fords on weekends. 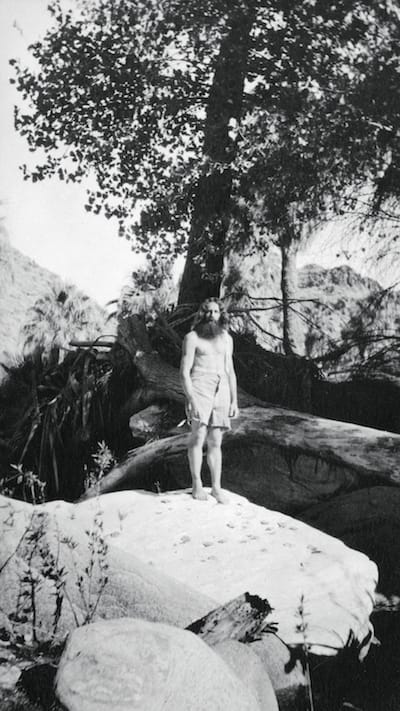 William Pester settled in Tahquitz Canyon, where he lived in a palm hut, ate raw fruits and vegetables, and made a living selling walking sticks and postcards.

We don't know how William Pester

chose this part of California's deserts,

but it offered an alien landscape as

different from respectable civic life in

Germany as could be imagined. 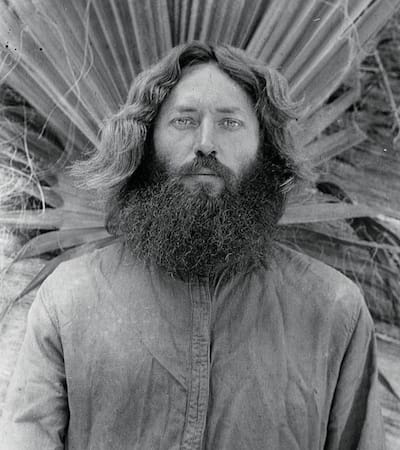 “There are too many people here now,” Pester
told a journalist in 1922. “When I first came to Palm Springs there were only a few Indians and an occasional white man. Now there are tourists all the time and motion-picture people pestering me, and I am no longer able to lead the life of contemplation that I desire.” The stream of visitors caused him to announce plans to leave for a more remote location in southern Mexico.

But he ended up staying. Despite his annoyance, he realized the visitors were curious about his unusual lifestyle and might be open to his beliefs. Seeing how interested they were in photographing him, Pester began producing postcards for sale. On one side, black-and-white images depict his ruggedly exotic visage, posing with beatific calm. On the back he printed his life doctrines about the laws of nature: “Eat fresh fruits and vegetables, take sunbaths, drink pure water, and abstain from unnatural stimulants like alcohol and caffeine.” Between postcard sales and charging for telescope views of the moon, Pester was able to sustain his humble diet of fruit and bread and even purchase some land away from tourists’ eyes, eventually planting an orchard of citrus, date, and nut trees. He remained a desert legend, a vision of possibility to others seeking a return to nature.