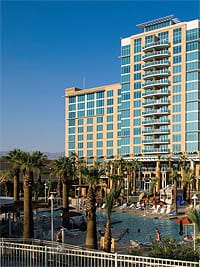 The Coachella Valley welcomed 12,682 new residents in 2007, bringing the population to 443,612 — a 92 percent increase over the 1990 census. In addition to the permanent population, the valley has a substantial seasonal population, which Wheeler’s market intelligence newsletter estimates at roughly 146,000 at the beginning of 2007. Four of our cities ranked among the 25 fastest growing cities in California: Indio (No. 15), Coachella (No. 16), Desert Hot Springs (No. 20), and La Quinta (No. 23).

The growth brings opportunities and challenges. Because of the extended period of growth here, the stakes are higher than ever for public and private sectors to achieve precision in big-picture policies. The Coachella Valley constitutes about 20 percent of the total Riverside County population. “I think we are at critical mass with our historic economic structure as it pertains to population growth,” says John Soulliere, president and CEO of the Coachella Valley Economic Partnership. “Having grown up on agriculture and tourism, the valley faces a turning point where its leaders must analyze long-term ramifications of continuing to grow with a dependence on this economic development model.”

Coachella Mayor Eduardo Garcia says his city has experienced an “intense period of residential and commercial development” in the past few years and that officials “are running hard to keep up with all the critical infrastructure needs that such development necessitates. We have been building new parks and refurbishing existing ones, paving streets throughout the city, building grade separations along Grapefruit Boulevard, expanding our water treatment facilities and reservoirs, and beautifying key sections of the city.

“Fortunately,” he adds, “our team has been successful in securing a number of grants from public agencies throughout the state that enable us to keep moving forward full speed.”

RETAIL: EDGING TOWARD MIXED USE

Despite a downturn in the national economy, local businesses churned out enough activity to maintain the same level of taxable sales in fiscal year 2006/2007 as the prior year. Total taxable sales for the region came in at $5.965 billion, compared with $5.969 billion for 2005/2006. The continued expansion of retail amenities throughout the region helped bolster sales, as did good years in the tourism sector.

Retailers embrace a range of opportunities to open shop in the Coachella Valley. Whether it is large national brand, big box-oriented centers like those under construction and/or opened in north Indio, along Highway 111 in La Quinta, or in south Palm Springs, or infill and boutique centers like several underway or being planned in Palm Desert, Indian Wells, Coachella, and La Quinta, there is a lot of activity.

Curtis Barlow of Coldwell Banker Commercial, Lyle and Associates, foresees continued growth in the retail sector, driven by abundant housing. “These houses will become homes soon,” he notes, and the slogan that “retail follows housing” should ring true.

For most in the hospitality industry, business declined rather quickly in late 2007 and kept moving that direction in the first half of 2008. “Everything in our industry is based on discretionary spending, whether you’re talking about families taking vacations or businesses booking conferences and incentive based meetings,” says local restaurateur Lee Morcus, president of Kaiser Restaurant Group.

Smith Travel Research reports the occupancy rate for the Coachella Valley in 2007 stood at 61.2 percent, a decrease of 4.4 percent compared to 2006 when it hit 64 percent. The average daily rate for the year was $130.31, up 2.5 percent from 2006. As Elie Zod, general manager of Doral Desert Princess Resort, notes, “What we lost in occupancy in 2007 we were able to make up for in rate, so it was a decent year overall. Unfortunately, it doesn’t look like we will be able to hold rate in 2008 because of the economic conditions and uncertainty, especially with the new and refurbished hotels adding so much new inventory in an already competitive market.”

With the stock market dropping precipitously and corporate earnings at large companies waning due to rising costs and cuts in consumer spending, it’s a tough time to attract conventions and meetings. “A couple major convention cancellations have caused problems in 2008, and budget cuts by government agencies and associations are putting pressure on meetings and convention bookings too,” says Aftab Dada, general manager of Palm Springs Hilton.

As Zod notes, “Businesses are more frugal than individuals, so we’re seeing lots of cancellations and the elimination of meetings and/or significant cutbacks in the size and scope of them — especially for incentive and special event types of meetings.”

In response, hoteliers are refocusing marketing efforts toward the more that 20 million people in Southern California who live within a three-hour drive of the desert.

Data gathered by Wheeler’s market intelligence newsletter indicates that in 2007 the eight desert cities with hotels collected roughly $44 million in transient occupancy tax on hotel room sales of $427.7 million. That’s up approximately 3.3 percent from the prior year, which was a strong year for local hospitality.

Palm Springs International Airport served more than 1.6 million passengers in 2007, good for an all-time record and an increase of more than 5 percent over 2006, which previously had been the benchmark year. But a lot more was going on at the airport than passenger traffic, with many important facilities improvements and more coming this year, including a substantial expansion of the car rental facilities, according to Tom Nolan, the airport’s executive director.

“The opening of the new concourse was a superb enhancement to the passenger experience,” he notes, “and phase two will include a modest expansion and major renovations to the main courtyard and main terminal that will enhance the aesthetic appeal of the airport. We realize that we are a window to the community, and we want to continue to meet the growing needs of travelers.”

At Palm Springs Convention Center, contracts signed during 2007 amounted to 92,000 room nights. “The year 2008 will come out weaker, which we had known for a while. The first half was generally pretty good, but the second half is a challenge,” says Jim Dunn, general manager. “However, the years 2009 through 2012 are filling in well, and we are aggressively pursuing large group business in many ways, including special familiarization events tied in with the Palm Springs International Film Festival and other high-profile events that really work well.”

Dunn notes that the rooms back online after renovation and opening of the Holiday Inn in south Palm Springs, (about which meeting planners have been raving), as well as the imminent reopening of the upgraded Riviera Resort & Spa farther north, will be very helpful in attracting and accommodating large groups.

The desert has an incredible amount of exceptional hotel property development in the planning pipeline. In Palm Springs alone, there are approximately 1,000 rooms affiliated with new hotels and expansions, including Spa Resort, Hard Rock, and Mondrian hotels.

The $300 million, 340-room Agua Caliente Resort Hotel opened in April to much fanfare and great demand for rooms, according to Agua Caliente tribal officials. A new Ritz-Carlton with hundreds of condo-hotel units is expected to open in Rancho Mirage late this year, returning glamour and excitement to a worldclass property.

High-end hotels will greatly enhance local tourism, Morcus says. “They essentially create their own markets in the region by bringing with them a large number of their loyalty program clientele that are such a positive addition for us.”

Worldwide branding based on special events continues to be one of the desert region’s greatest strengths. All of our top events have continued to grow in size, scope, and importance in recent years, adding to the awareness and prestige that attracts visitors from around the world. Through the reach of the Bob Hope Chrysler Classic, Skins Game, and former Pacific Life Open in sports to the Palm Springs International Film Festival, Coachella Music and Arts Festival, La Quinta Arts Festival, and so many others in the cultural arena, the desert draws visitors who want to experience our exceptional natural setting, great weather, and breadth of activities.

Dick Baxley of Baxley Properties of Palm Desert notes that high vacancy rates (now at about 20 percent) and dropping rents are affecting the 25 new office buildings in the valley, plus the existing inventory, but there have been more than 600,000 square feet of inventory added since January 2006, bringing the valley’s total commercial space to about 4 million square feet.

“Office condominiums are especially active at present,” Baxley says. “Location, price, and availability of ample parking are still the key factors to successful renting,” he adds, pointing out that incentives are being offered to lure renters. “Space is available at a fraction of its asking price,” he says, but cautions, “Do not delay too long.” The rental market could change soon.

GREEN: THE COLOR OF EFFICIENCY

It seems like everyone is talking or at least thinking about going “green” these days. Leaders within the public sector, developers are working aggressively to maximize the green opportunity that most surely awaits those that embrace it as a means for protecting the precious desert environment, reducing energy consumption, and attracting clean industry with high-paying jobs.

When it comes to reducing energy consumption, it would be hard to identify any single agency in the United States approaching it more effectively than the City of Palm Desert. An ambitious effort to reduce energy consumption by 30 percent that was originally hatched by Councilman Jim Ferguson and City Manager Carlos Ortega has led to the passage of AB 811 by the California Legislature and creation of the Palm Desert Energy Independence Program, which allows owners of residential and commercial property to secure full funding for energy-saving technology through the city’s Redevelopment Agency at attractive interest rates for terms much longer than conventional lenders provide.

In addition to reductions in consumption and cost (which looks like it is on track to increase substantially based on Southern California Edison’s request to increase rates by up to 30 percent), Palm Desert’s program could possibly become a magnet for green oriented businesses.

“With this program, we’ve essentially opened a whole cottage industry in the Coachella Valley,” says Ferguson, who chairs the Coachella Valley Economic Partnership board. “Several companies have already opened up shop in the city to take advantage of what looks to be a very large base of new customers. We could become the equivalent of a solar Silicon Valley; because when you put together money, opportunity, and technology, you are likely to yield an entirely new business base.”

Soulliere notes that the Coachella Valley has a strategic advantage when it comes to the green technology industry. “First, we have established clusters of the renewable/alternative energy industry in the valley with wind, geothermal, and hydrogen fuel cells in our public transit system,” he says. “Second, we have one of the leading cities on ‘going green’ in the country in Palm Desert. While many U.S. cities have talked and created resolutions to memorialize the idea of a greener future, Palm Desert has taken aggressive action to ensure it. These are the tangible actions the industry and its workforce are looking for as part of the determination to locate in a specific area.”

The Coachella Valley also has a geographic advantage with about 30 million people within a three- to four-hour drive and interstate access to the larger U.S. Sunbelt. Add to these factors incentives through the Coachella Valley Enterprise Zone, the presence of two university systems, affordable housing and land, and great lifestyle amenities, and we might be looking at an even greener horizon.