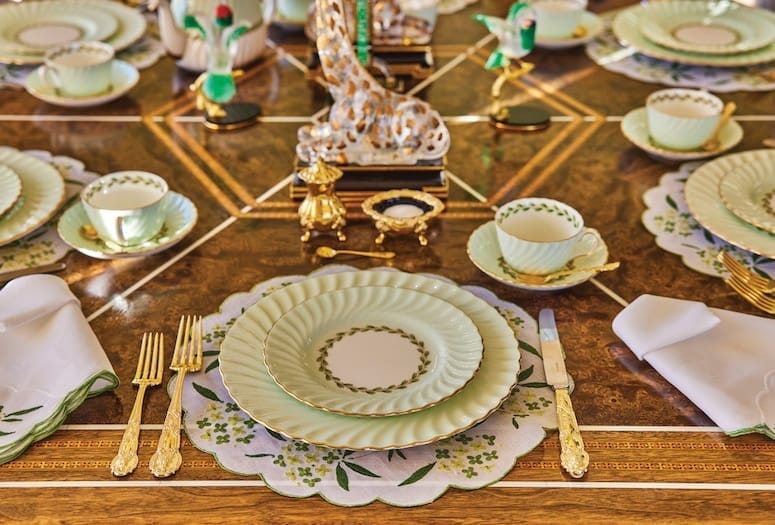 Meticulously appointed tables at Walter and Leonore Annenberg’s Rancho Mirage estate reflected attention to detail. Guests expected nothing less than perfection. After all, U.S. presidents had appointed the couple to ambassadorships (he to England’s Court of St. James and she as U.S. chief of protocol). So, a sudden reverberation in the Sunnylands dining room one night led to an “eerie silence,” recalls Michael Comerford, the Annenbergs’ longtime house manager.

Decades later, Comerford recalls the incident — when someone in a serving line released a door so quickly it knocked a plate from a butler’s hands — because mishaps were a rarity at Sunnylands and because the fragile porcelain crash-landed on terrazzo.

As the butler doubled back for a replacement dish, guests resumed their reverie. But, as Comerford recounts, when the butler served Leonore Annenberg lunch the next day, she commented, “That was a very expensive accident you had.” She did not fire him, dock his pay for the 24-karat gold-rimmed porcelain, or mention the incident ever again. 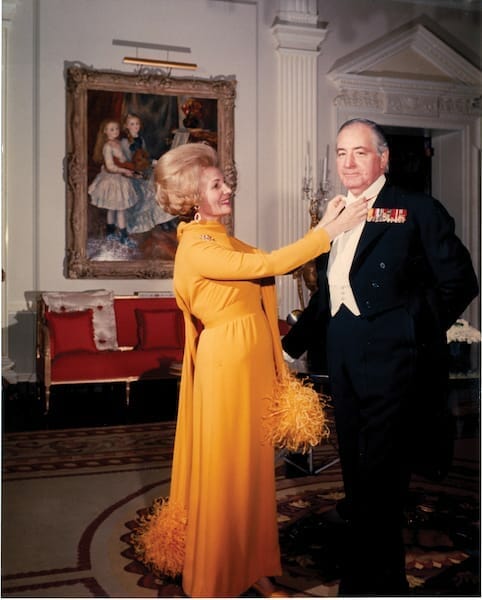 Visitors to Sunnylands Center & Gardens viewing the exhibition A Place at the Table: Dining at Sunnylands should appreciate the extent to which the butler may have been horrified given the exquisite “Flora Danica” involved in the accident. Of particular note is use of the Royal Copenhagen pattern in the replication of a place setting for Queen Elizabeth when she and Prince Philip visited in 1983. The design pairs with Georg Jensen’s sterling silver “Cactus” flatware and hand-embroidered, custom linens by Léron.

“A carefully laid table shows your interest in people,” says Anne Rowe, Sunnylands’ director of heritage and curator of the exhibition. Leonore Annenberg especially devoted diligence to tablescapes that made guests feel considered. Additionally, Rowe notes that “breaking bread” has long been a form of diplomacy, and Sunnylands has served as a venue for fostering international unanimity through social connection.

By most people’s standards, the Annenbergs possessed a monumental inventory of dishware, with collections of some 30 patterns. A Place at the Table highlights five china designs (two from Hungary’s Herend, two from England’s Minton, and one from Denmark’s Royal Copenhagen) and showcase-worthy silver pieces.

“For tableware collectors, looking at them is enough. But for everyone, the exhibition offers an opportunity to explore the social history of Sunnylands,” Rowe says. She points to two types of place cards on display: one Leonore Annenberg used when planning where guests would sit and the “official” cards that would greet them at the table.

“She was a natural historian,” Rowe says, referencing the cards that were stored in boxes. 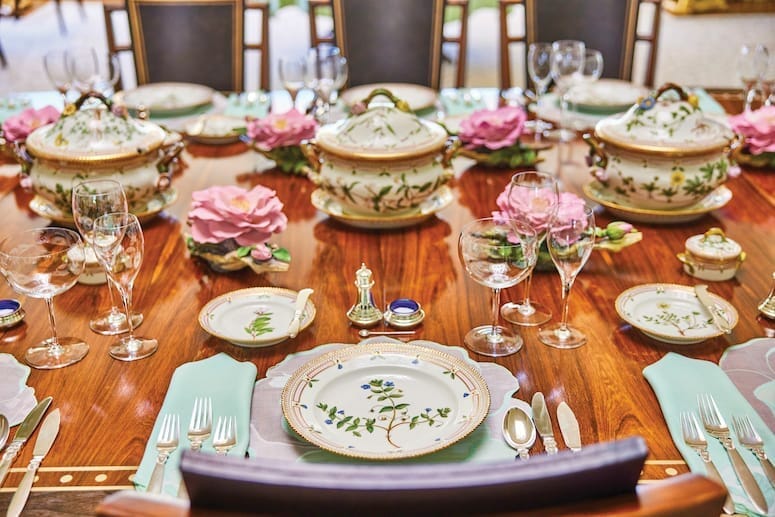 Comerford experienced his late employer’s exacting nature especially when she consulted him prior to hosting guests at Sunnylands, which the Annenbergs did with frequency.

“We always sat in the atrium late morning or early afternoon on a Tuesday or Wednesday before guests arrived [typically late afternoon on Fridays],” he says. “We discussed what rooms they would be staying in. Then we went on to menus and table settings.”

If they were repeat guests, Comerford would bring to these meetings records of their previous visits.
“Mrs. Annenberg ran a very structured household, and so it was very easy to work for her and the ambassador,” he says.

According to Comerford, the china most often put into service were Royal Copenhagen’s “Flora Danica,” Minton’s “Cheviot Green,” and Herend’s “Rothschild Bird.”

“Usually on a Friday [with guests], we used the Minton,” he says. “Then there would be a large party on Saturday night with outside guests. For that, we used ‘Flora Danica.’ ” 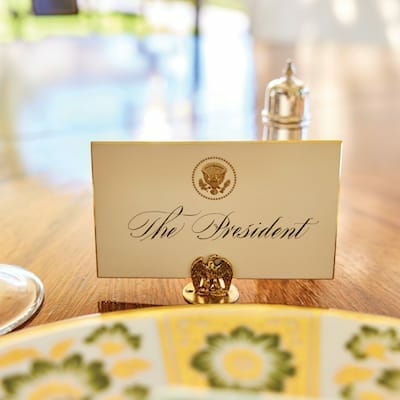 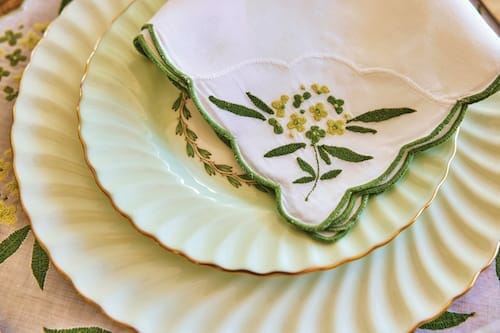 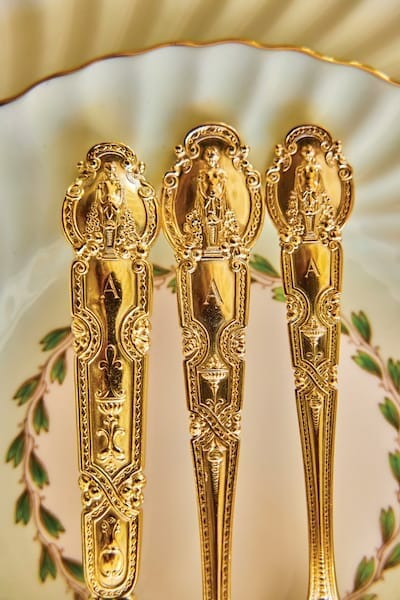 The English  china, “Royal Crown Derby,” and flatware in silver-gilt by Tiffany & Co. in the “Renaissance” pattern.

The history of “Flora Danica” dates to the 1700s when Denmark’s King Frederick VI and Queen Catherine II commissioned a set of 24-karat gold-rimmed porcelain featuring 3,240 plants. An underglaze on the back side of each piece gives the Latin name of the plant represented and includes a notation to the book volume and copper plate recording the designs.

Walter and Leonore Annenberg purchased the dishware in London and used it at the official residence of his ambassadorship. Eventually, the collection ended up at their Rancho Mirage estate and grew to 437 pieces: 38 complete place settings, plus serving ware.

“Rothschild Bird” possesses an enchanting history from Hungary in 1860. The head of the Herend porcelain company secured a loan from the Rothschild banking family to increase production and expressed his appreciation by creating a pattern inspired by a story of Baroness Rothschild losing a pearl necklace while strolling in her garden and the discovery by a gardener a few days later of the necklace strung across a tree branch.

The Annenbergs used “Rothschild Bird” for their private breakfasts. Because Walter was communicating with the Philadelphia headquarters of his TV Guide magazine, he had breakfast delivered to his office on a tray. His wife typically had breakfast brought to her bedroom on a tray. The only difference was the color of porcelain roses atop their coffee/tea pots: his pink and hers yellow. 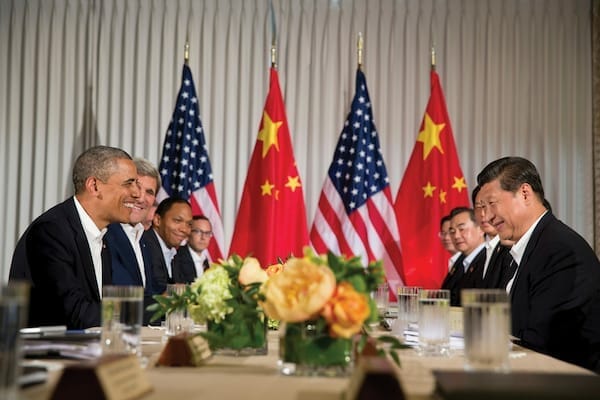 Their second-largest china collection, with 427 pieces, was Minton’s “Cheviot Green,” with 24-karat gilt, scalloped edges, and an inner laurel wreath.

Also in the exhibition is a replicated place setting for President Barack Obama when he hosted Jordan’s King Abdullah II at Sunnylands in 2014. Royal Crown Derby’s 24-karat gold-rimmed “Derby Panel Green” previously had been used for the 2013 presidential summit at Sunnylands between Obama and China’s Xi Jinping.

The Annenbergs had occasionally mixed this pattern with “Cheviot Green,” not because both were made by English porcelain companies but because of their complementary color and style.

Just as with “Rothschild Bird,” Herend used bright colors and butterflies in “Queen Victoria,” shown in an exhibition case with an explanation that the 24-karat gold-rimmed pattern was named for the British monarch after she commissioned a collection for Windsor Castle.

Royal Copenhagen additions or replacements had to come from Denmark or London, whereas Minton and Herend pieces could be sourced from a company in North Carolina. As Comerford explains it, this domestic advantage was one reason “Cheviot Green” was the go-to china for family gatherings with the Annenbergs’ grandchildren. 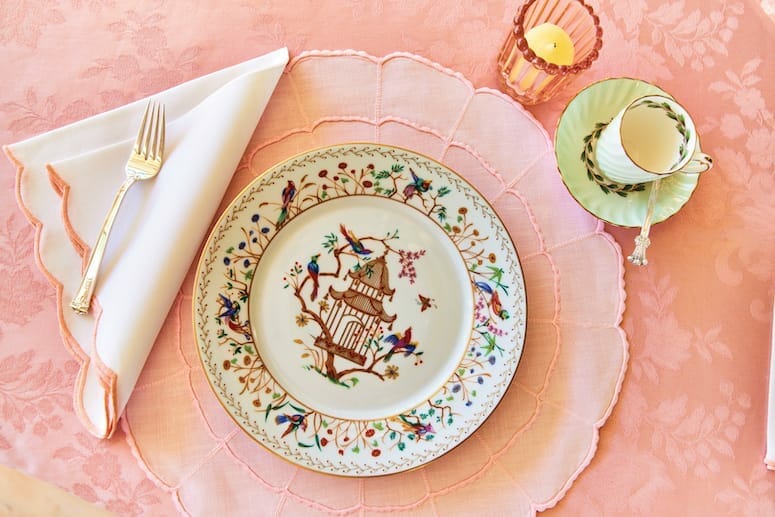 Dishes by Tiffany & Co. in the “Audubon” pattern were used on occasion for special desserts.
For meals in the game room, on the patio, or in the Chinese Pavilion on the estate golf course, the Annenbergs opted for casual, sunny yellow tableware. The stripes and swirls, respectively, of “Carousel” porcelain by England’s Thomas Goode and “Flamed” ceramic by Austria’s Gmundner Keramik looked sharp together, with sunflower napkin rings and glasses, and with coasters bearing Sunnylands’ yellow emblem. 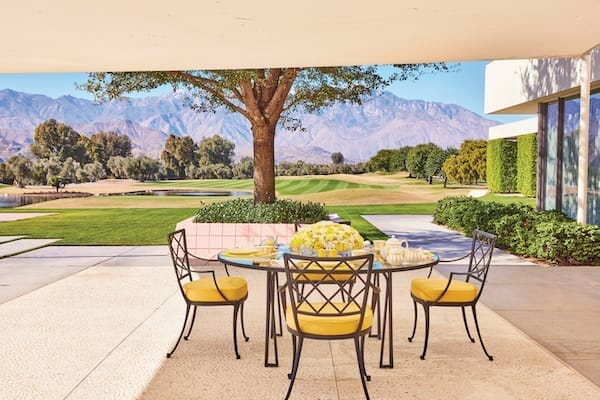 Tea awaits guests on the Game Room patio, where the color palette shifts to primary yellow, a departure from the soft sherbet theme in the main house.

Accordingto Comerford, Leonore Annenberg refrained from telling guests about the impressive histories of china on the table or pointing out that the reverse sides bore distinct marks by the artists who created them.

However, she decided in the mid-’70s to relocate the dining room from the atrium area where guests gathered before dinner to a billiards room at the end of a gallery overlooking the grounds. As Comerford recalls, she suggested to her husband, “Wouldn’t it be nice if we had a dining room where people could be surprised by table settings?” Indeed, Comerford says, there were oohs and aahs and comments of “Oh, Lee, what a splendid table!”

“She enjoyed all those compliments,” Comerford says, smiling at the memory.

Installation views of A Place at the Table: Dining at Sunnylands, which celebrates the Annenbergs’ remarkable history of gracious gatherings through an exploration of the dining experiences they provided their guests.
Sunnylands staff followed strict protocols that included washing and drying china and crystal by hand (and even precluded the use of a damp towel on Baccarat crystal). China was stored in earthquake-proof cupboards with felt pads between each plate. Baccarat crystal was stored (stem bottom down) on the shelves of a glass pantry. Flatware was stored in felt-lined drawers, except for the silver-gilt, which was housed in its own chest. Silver showcase pieces not on display were wrapped in archival tissue to reduce tarnishing.

Though dishes star at the center of a place setting, they shine best against a stunning backdrop and with other features that lead the eye across the table horizon. A Place at the Table: Dining at Sunnylands includes pieces of flatware, glasses, and linens that became critical components to setting an exquisite tableau. 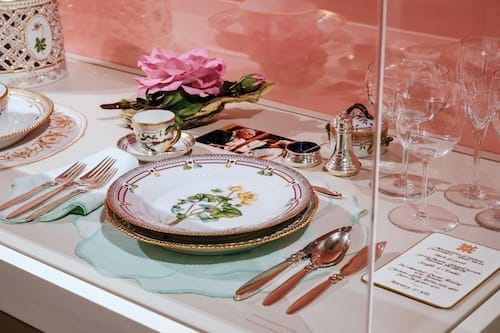 The first three are sterling silver. The latter is silver-gilt and the most elaborate of the designs: Engraved with the letter “A,” the Annenbergs’ 394-piece set resides in a custom box with a brass nameplate reading “Sadie Annenberg” (Walter’s mother). The exhibition even includes a Tiffany sterling silver straw with a stirring spoon on one end that Leonore Annenberg favored for drinking iced tea and water. 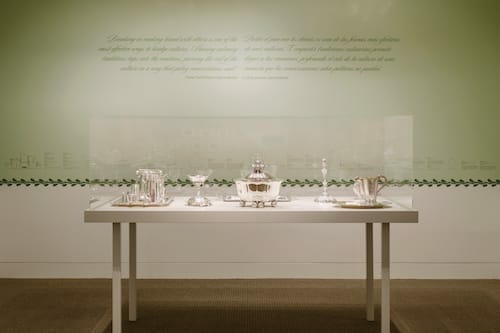 Glassware selection for Sunnylands dinners was never an issue; the Annenbergs used only Baccarat crystal.

Representatives of New York’s bespoke linen company Léron visited Leonore Annenberg annually to discuss which hand-embroidered, custom designs she would like. She favored botanical motifs — especially florals — and round placemats, which fit her preference for round tables (lacking hierarchal connotations and suggesting a free flow of conversation). Many of the placemats featured scalloped edges, further complementing the scalloped edges of some of their dishes.

The final component of Sunnylands place settings was the centerpiece display. Longtime house manager Michael Comerford understood what would most please Leonore Annenberg and showed a flair for mixing flower arrangements, candles, and showcase pieces from their collections of silver and china so that each occasion offered a breath of fresh air.