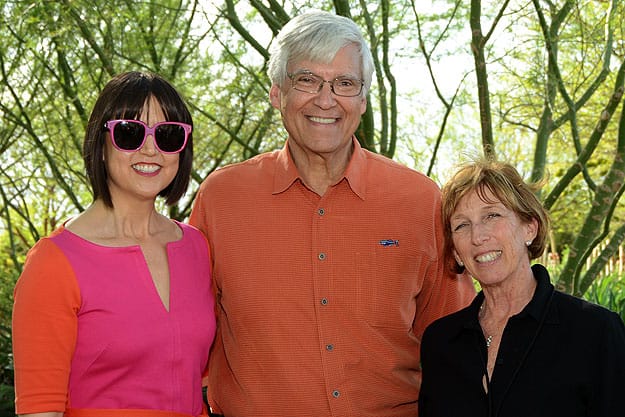 Sunnylands Chic was a major topic of conversation throughout this year’s Fashion Week El Paseo™.  Palm Springs Life magazine and Sunnylands Center & Gardens were a formidable team when it came to bringing to life the fashions of renowned socialite and former Reagan administration Chief of Protocol, Leonore Annenberg.

The first event took place at Sunnylands Center with four of Mrs. Annenberg’s gowns and two of Ambassador Walter Annenberg’s suits reinterpreted by well-known designers Michael Costello, Anthony Franco, Paul Hernandez, Lloyd Klein, Nick Verreos, and Fe Zandi. The historic gowns and suits along with the reinterpreted fashions were then on runway display in the Fashion Week tent on El Paseo for a day that drew over 1,000 people.

The idea of Sunnylands Chic culminated in a presentation by local design star Trina Turk at a filled-to-capacity City of Rancho Mirage Public  Library. Ms. Turk finds her design inspirations in California modernism and she spoke of the architecture of the Sunnylands A. Quincy Jones-designed house, the landscape of the estate, and the patterns and designs of both the interiors and clothing of the Annenbergs and their effect on this year’s collection. Following the presentation, Ms. Turk and invited guests spent time in Sunnylands Gardens for some conversation and refreshments.