After an extended weekend in 1974 at Walter and Leonore Annenberg’s estate in Rancho Mirage, the Prince of Wales sent his hosts a glowing thank-you letter.

“Rarely have I enjoyed myself so much or had such a marvelous opportunity to relax completely as I did with you,” Prince Charles wrote in part. “I so enjoyed meeting the Reagans — they were full of charm and great warmth and it was great fun to listen to Mr. Reagan, whether he was being serious or funny. Thank you for introducing him to me. And thank you for so many other things, like asking Bob Hope and Frank Sinatra to come ’round … And also for arranging ‘Anne of a Thousand Days.’ I now know how to deal with Spanish ambassadors ..!”

“Walter and Leonore Annenberg appear to have delighted in bringing their circle of friends together at Sunnylands,” says Anne Rowe, director of collections and exhibitions at Sunnylands Center & Gardens. “They observed not only interesting conversations by diverse minds, but also, I think, important conversations occurred.”

“Individuals who came to spend time cared about world peace and diplomacy as a solution to problems,” adds Kathleen Hall Jamieson, director of the Annenberg Public Policy Center at the University of Pennsylvania. “When you listened to the range of discussions at the Annenbergs’ dinner table, what you heard was a global perspective. Their friends included ambassadors from around the globe, and they knew many heads of state.

“The biggest advantage that Sunnylands has,” she continues, “is that it is situated in a stunningly beautiful environment and the home has historical resonance. People coming there know that presidents have been there and made important decisions there — that it is not simply in a beautiful location but has contributed to a global dialog.”

“I so enjoyed meeting the Reagans — they were full of charm and great warmth and it was great fun to listen to Mr. Reagan, whether he was being serious or funny. Thank you for introducing him to me.”Prince Charles, in a 1974 letter to the annenbergs 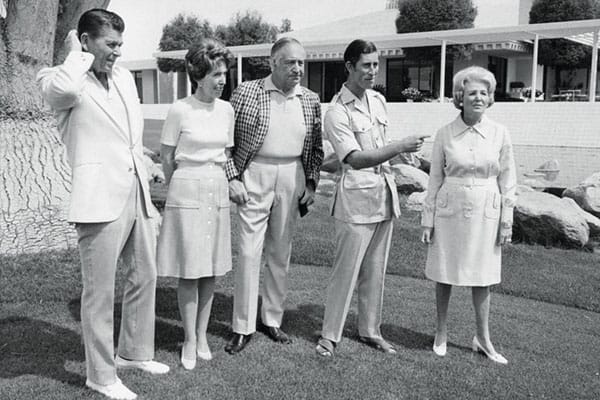 PHOTOGRAPH COURTESY OF THE ANNENBERG FOUNDATION TRUST AT SUNNYLANDS

Walter Annenberg takes in the scenery with Ronald and Nancy Reagan (left), Prince Charles, and Leonore Annenberg during a 1974 visit to Sunnylands.

“There is a phenomenon here,” declares David Lane, president of The Annenberg Foundation Trust at Sunnylands. “When you step into the house, you feel transported physically and psychologically. You just come to a different mindset. One thing is clear: You are not in Washington [D.C.] … People immediately let down their guard and are more open to other perspectives.”

“[The Annenbergs] came to realize that Sunnylands had a powerful landscape on which good things could happen,” Rowe attests. “Through their [foundation] trust, they chose to capture and bottle what they saw happen here throughout their lives. They wanted us to continue to bring great minds together — out of the stressful environments of big cities — to do good work for the world.”

While she calls the couple “natural diplomats,” they were in fact officially installed as such: he as the U.S. ambassador to the United Kingdom (1969–1974) and she as chief of protocol under President Ronald Reagan (1981–1982).

“Their business relationships and political appointments provided them access to an amazing array of notable individuals,” Rowe notes. “These encounters evolved beyond formalities. They forged lifelong friendships with influential people throughout the world. The holistic stewardship of their many fascinating relationships earned them a convening authority … One example of their many impactful pairings was introducing Ronald Reagan to [U.K. Prime Minister] Margaret Thatcher.”

A frequent guest who thrived on fishing, golfing, and socializing at his friends’ Rancho Mirage estate, President George H.W. Bush planned a weekend there in March 1990. Then, amid mounting tensions over trade between the United States and Japan, he decided to meet with Japan’s Prime Minister Toshiki Kaifu. Rather than cancel his getaway, Bush met Kaifu in the desert and invited him to a dinner
at Sunnylands.

Sensing that what they established had become bigger than them, Walter and Leonore Annenberg created a legacy that would survive them.

“They wanted to have a public purpose,” Lane says, crediting their vision to a trust document that “promotes world peace and facilitates international agreement” while leaving the details to the foundation’s trustees. 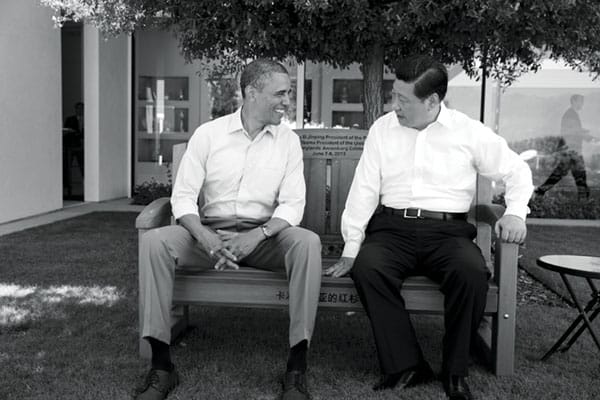 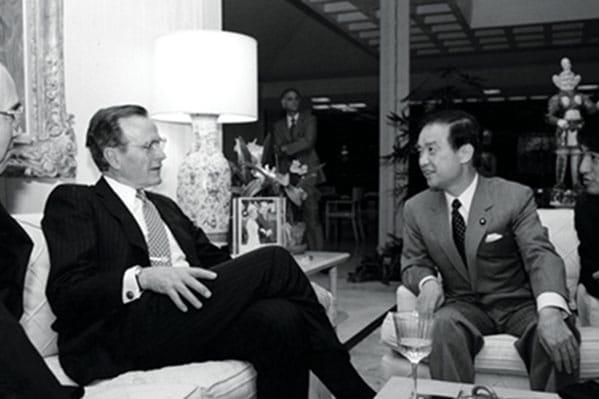 "The Annenbergs came to realize that Sunnylands had a powerful landscape on which good things could happen. They wanted us to continue to bring great minds together ... to do good work for the world.”Anne Rowe, director of collections and exhibitions, Sunnylands Center & Gardens

A little more than a year after The Annenberg Retreat at Sunnylands opened in June 2013, President Barack Obama met there with China’s President Xi Jinping. Obama returned in 2014 to meet with Jordan’s King Abdullah II and in 2016 for a summit with the 10 leaders of the Association of Southeast Asian Nations.

“He viewed this as a sanctuary where you could be comfortable and relax,” Lane says.

Xi simply called it “a place of sunshine.”

The “shirtsleeves summit” (which included a one-on-one amble around the grounds by Obama and Xi) established a rapport between the world leaders that set the stage for future cooperation between their countries.

In addition to a serene and casual ambiance, a critical component of Sunnylands lies in replicating the hospitality for which the Annenbergs were known.

“We insist that, on Saturday afternoon, [retreat] participants recreate: fish, golf, play tennis, walk,” Lane says, explaining that the underlying goal is to get their minds off business so they can bond personally. “That is key,” he emphasizes.

Sunnylands protocol remains intact when the trust must resort to hosting gatherings elsewhere to meet participants’ schedules. For a meeting in January with leading scholars on China (to develop recommendations for submission to the White House and Congress on the U.S.-China relationship), it took over Washington, D.C.’s historic Meridian House.

“We insisted on the same elements that we could replicate at Sunnylands, including no neckties. And we insisted on recreation time,” Lane says, noting the aim to establish a non-Washington ambiance. “It is our belief that you aren’t, generally speaking, going to have the same effect [in a government setting].”

In October 2017, the trust partnered with U.S. Pacific Command (now U.S. Indo-Pacific Command), the Carnegie Endowment for International Peace, and the Brookings Institution to host a discussion among military, diplomatic, and political leaders from the United States and India on bilateral security. Held at a Maryland inn, the dialog established an agenda for a trip this past September by Secretary of State Mike Pompeo and Secretary of Defense James Mattis to New Delhi that brought forth a military communications agreement. 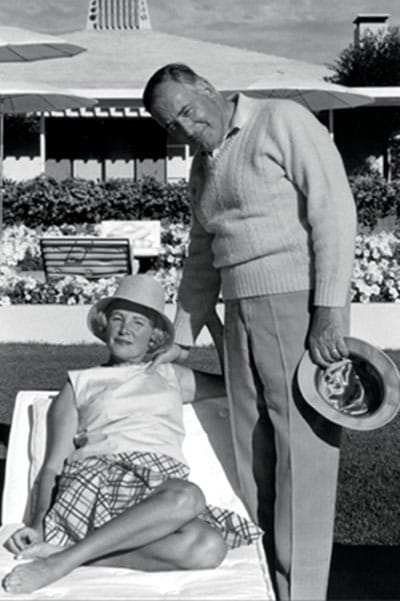 Walter and Leonore Annenberg rest near the pool
following a weekend with guests in 1968.

“Everything is done to instill confidence in participants that this is a safe place to speak the truth ... that generates constructive conversation and is encouraged.” David Lane, president, The Annenberg Foundation Trust at Sunnylands

After the 2016 presidential election, Lane says, he sent a letter to Donald Trump’s transition team “making it clear that we have this public purpose.” Despite the president’s reliance on his Mar-a-Lago resort in Florida as an off-site diplomatic venue, Lane continues working his relationships with people in the White House administration.

“When something major raises its head, like the U.S.–North Korea summit, even when I know it’s a long shot, we go through the motions of reminding them we are here,” he says. “We let our networks know, but those can be moving targets [i.e., a constantly changing roster of government officials].

“We want to make an impact in contributing to international peace and cooperation. When the time is right, our record of achievement will yield [Trump’s] participation in a [Sunnylands] retreat.”

By mid-September, Sunnylands had committed to nine retreats in 2019. Lane anticipates a full dozen, as well as meetings that are “more than a dinner, but less than a retreat — a half or full day to shape an agenda for the bigger thing to come.

“What often happens is the closer you get to the date, a partner might soften on the outcomes. It is up to us to keep driving,” he says. “The other important component is the people — and this is the trickiest part. We have to have some ‘anchor tenants.’ We might say, ‘If we can get four of these six [participants], we have critical mass and can build around that’ … We look for balance — to have a range of views.”

Walter and Leonore Annenberg, Rowe says, “were power brokers of the second half of the 20th century, so they created a nexus between industry, the arts, education, entertainment, and political power.”

“They had a reputation for their hosting,” Lane notes. “It bore the appearance of being informal, but it was well thought through.”

Even now, food served at the estate must meet the impeccable standards set by Leonore Annenberg, and hosted events are designed to include cultural components beyond the estate’s impressive art collection. For a U.S.-Mexico retreat, Sunnylands invited the writer and director of Coco to personally screen their Pixar film themed around the Mexican holiday of Día de los Muertos.

Lane acknowledges that the trust has “not done a great job” in one regard: relating the scale of its endeavors to the community at large. In part, this is because details about meetings can be sensitive. Indeed, Sunnylands retreats follow Chatham House Rule precepts.

“Everything is done to instill confidence in participants that this is a safe place to speak the truth,” Lane affirms. “They’re free to make use of a conversation but not to attribute anything said to any individual in the sanctity of the estate. That generates constructive conversation and is encouraged.”