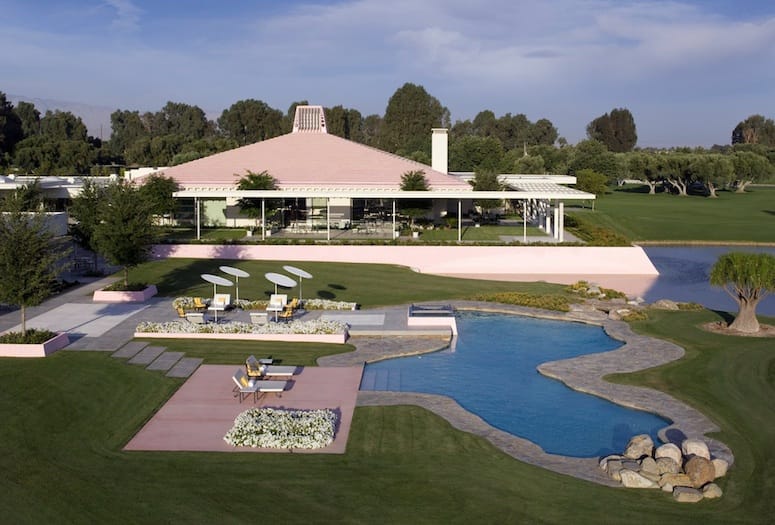 The Annenberg Retreat at Sunnylands will celebrate the 50th anniversary of the completion of Walter and Leonore Annenberg’s famed midcentury modern estate in its upcoming season.

Throughout the 2015-2016 season, Sunnylands will host several 50th-anniversary events and invites the public to contribute to the stories, photos, and memorabilia that will be preserved in the archives of the historic institution.

The anniversary coincides with Sunnylands’ plans to start construction of a new archives building that will house the Annenbergs’ precious art and artifacts, including correspondence with U.S. presidents and British royalty. The names of community members and others who share their experiences and mementos will be registered in the archives.

The 50th-anniversary events begin with the season’s opening day, Sept. 24. Visitors to Sunnylands Center & Gardens will receive a free commemorative pin with a custom designed 50th-anniversary logo featuring the home’s iconic pink roof. On Sept. 25, Sunnylands is showing Ocean’s 11, the first of three “Films on the Great Lawn” to be screened this fall starring Frank Sinatra, a close friend and neighbor of the Annenbergs, whose centennial birthday is Dec. 12.

Other Sunnylands events coinciding with the estate’s 50th anniversary include:

• “Day of the Dead” activities and art installations in conjunction with Coachella Valley Days of Los Muertos in late October and early November.

• A December celebratory reception with Eisenhower Medical Center to mark its 45th anniversary and Sunnylands’ 50th.

• The opening in January of a new exhibition, Asian Artists in Crystal: Steuben Glass at Sunnylands, featuring the only complete collection of a 1956 series of decorative glassworks that marries Asian artistry with American craftsmanship. The project was launched as a diplomatic initiative by the Eisenhower administration.

• A special community event in the spring commemorating the completion of Sunnylands and the welcoming of its first guests.