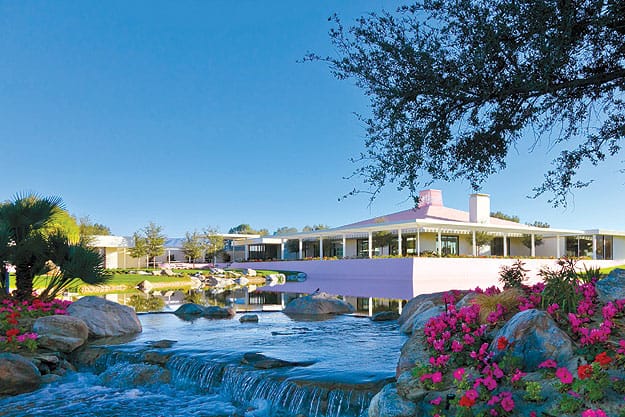 By noon on a mid-July day, morning visitors have departed Sunnylands Center & Gardens. Geoff Cowan enters the light-filled café, points out and recommends the pastries in a basket on the counter, and orders a chicken salad. As the sun streams in through the glass walls, the president of The Annenberg Foundation Trust at Sunnylands reflects on his experiences since the property owned by the late Walter and Leonore Annenberg opened to the public in March.

“I went on Trip Advisor yesterday,” says Cowan, referring to the website known for user-generated travel ratings. “People rave about [Sunnylands].” Indeed, of 17 reviews from visitors as far away as the United Kingdom and Australia, 14 bestow a perfect score of 5 (the remainder assign a score of 4). And in the guest book at the center’s front desk, superlatives — accompanied by no less than one exclamation point (“Fabulous!” “Awesome!” “Beautiful!” “Wow!” “Thank you!” “Will be back!”) — fill the pages.

By the end of July, Sunnylands had welcomed almost 30,000 visitors. Tours of the Annenbergs’ residence are so popular that tickets — released online in two-week increments — sell out within 10 minutes of going on sale, causing people to call and say, “Something’s wrong with your computer.”

Yet all this public attention only hints at what’s been going on beyond the famous pink walls along Bob Hope and Frank Sinatra drives in Rancho Mirage.

In April, Bill Gates; Salmon Khan, creator of the revolu-tionary Khan Academy; Maria Klawe, president of Harvey Mudd College; and other distinguished leaders gathered for a math education retreat. Cowan says four or five important ideas emerged over the two and a half days.

“The one we will be following up on most aggressively is this: There’s a lot of technology out there, software to teach people math, but very little to help teachers and school districts develop that technology and know what works,” Cowan says. “The idea is to develop an organization that would help parents, teachers, school districts, and governments know what works and why.”

In conjunction with the Woodrow Wilson International Center for Scholars, The Retreat at Sunnylands brought together former Secretary of State Condoleezza Rice; Congresswoman and Wilson Center President/CEO Jane Harman; Los Angeles Mayor Antonio Villaraigosa; Mexican Ambassador to the United States Arturo Sarukhan; and other political, academic, and media leaders to discuss relations between the United States and Mexico. On July 11, Cowan presented a white paper from the three-day retreat (March 29-April 1) to key members of Congress at the Wilson Center in Washington, D.C.

“Our retreats are designed not just to be places where people get together and share ideas, but also to have meaningful outcomes,” Cowan says, noting that the Wilson Center and Sunnylands are continuing to reach out not only to Congress, but also to the political campaign teams and the transition team for Mexico, which elected a new president on July 1.

While Cowan dreams of hosting a meeting between Mexico’s President Enrique Peña Nieto and whoever wins the U.S. presidential election in November, he says, “Our real goal is to come up with exciting ideas on a bipartisan, bi-national basis. I think we might have done that.”

Cowan says that Sunnylands, which maintains a staff of five people working specifically on retreats, should be more than just a venue for meetings.

“We also now try to think of ourselves as being in a relay race where the preparation for the retreat and the retreat itself constitute one lap of the race. Then you want to pass the baton on to somebody else. The most devastating thing is when the baton is dropped. To get the baton firmly in somebody else’s hand is a hard thing to do, so we want to carry the baton forward.”

While learning about retreats during its initial months, Cowan says, “We created ‘the Sunnylands process’ — a method by which we keep stopping and taking note of where we are in the conversation. It leads to greater consciousness of how you can have an impact.”

Cowan is pleased with the relationships that have been established between The Annenberg Foundation Trust and the media, political leaders, and institutions. “We all have a common interest in making [Sunnylands] an increasingly important part of the world,” he says. “And I see that only building.