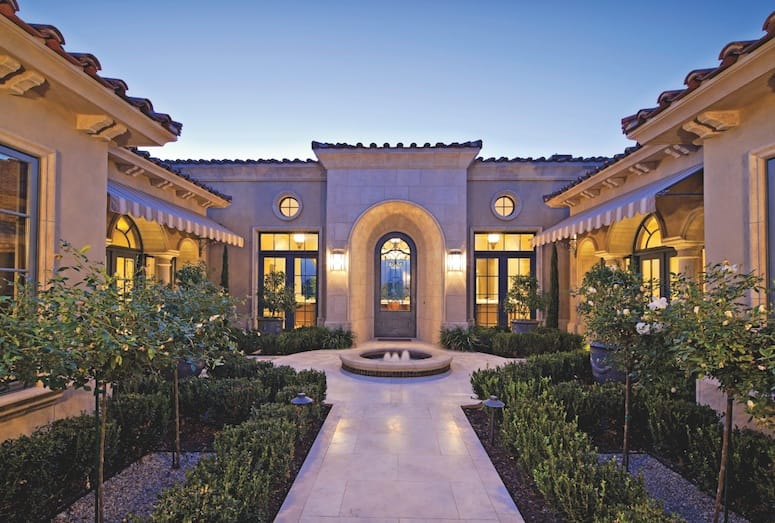 Since the first terra cotta rooftop and set of arches appeared on the California landscape, we have enjoyed a mad love affair with the Mediterranean aesthetic.

For more than a century, this style of architecture has moved through several permutations here, known by a host of names, including Spanish Revival, Italianate, and, in a nod to ourselves, Early California.

And why not? We, like our Mediterranean counterparts, enjoy year-round sunny climes that encourage a similar dolce vita, where home is a celebration, its function to enhance our pleasure for food, drink, and the outdoors, but above all else, commune with friends and family.

This old-world sensibility is certainly exemplified behind the gates of the Toscana Country Club in Indian Wells. Here, amid palm, olive, and citrus trees, the rustic elegance of Italian, Spanish, and Early California–style architecture reigns supreme.

This — and the resort living that comes with two Jack Nicklaus Signature golf courses — is what prompted Mike and Kathy Farmer to purchase not one but two lots within the newly arrived Toscana development nearly a decade ago.

Splitting their time between Missouri and the Coachella Valley, the couple purchased the first lot to immediately build a Tuscan-style semicustom home large enough to accommodate the two of them as well as their two adult children. The second estate lot, however, was an investment in the future.

“We loved the view of the golf course, the lake, and the mountains and decided to wait to build on it until we knew exactly what we wanted,” Kathy says. “This would be our fifth and final home in the desert, and each one up to this point was a little bit bigger and a little more accommodating; it really helped us decide what we wanted on the special lot that we picked out.”

When the couple first approached California architect Robert Altevers in 2011 to build their desert dream home, they had already given much thought to what they wanted. Topping their list of requirements was preserving the lot’s incredible view and blurring the line between the outdoors and the indoors. The couple also entertains often, so they wanted a guest-friendly home with large areas to gather, one that would work as beautifully for formal affairs as it would for casual get-togethers.

And with a growing family — their children now married and having children of their own — they wanted guest quarters that would provide the privacy of a home within a home.

“We’re used to putting a house on several acres,” says Kathy, referencing the custom home the couple had previously built back in Jefferson City, Missouri. “The biggest challenge was doing everything we wanted to do on a country club lot.”

Early on, the desire was to move away from the rustic design of their first Toscana home, inspired by centuries-old Tuscan farm buildings that had, with several additions, expanded in size over time, resulting in charming yet irregular compositions. By contrast, the Farmers wanted a floor plan with more formal lines and symmetry.

“We went with a classical Mediterranean design,” says Altevers, whose architectural portfolio includes estate homes, country clubs, and resort hotels, among them The Resort at Pelican Hill in Newport Beach and The Reserve in Indian Wells, as well as many of the homes and all of the clubhouses at Toscana. “It’s more formalized and better reflects the Farmers’ lifestyle. It’s balanced, surrounding a courtyard and mostly symmetrical in its arrangement. The stone cladding on the exterior, the three-arch composition, where you have an arch in the center flanked by smaller arches on the side, provides that classical Mediterranean detail.”

To complement the home’s design, the couple chose a separate formal dining room and a great room that would take full advantage of the views. Here, Altevers installed wide pocket doors that open with the flick of a switch and disappear into the walls. Combined with the all-glass wet bar situated at the room’s center, the space opens up to about 40 linear feet to the outdoors.

From this vantage point, the vanishing edge of the swimming pool looks as if it blends right into the lake on the golf course, another effect that was important to the couple, which accounts for why the wet bar is not only all glass but also sunken below floor level so the eye looks directly over the bar, over the pool, and out onto the lake.

“If that bar would have been normal height from the floor, rather than sunken, it would have taken away from that feeling of the lake coming right up to the house,” says Mike.

When asked whose idea it was to create such a dramatic effect, neither the homeowners nor the architect can recall.

“It was a collaborative effort,” says Altevers. “There were a lot of discussions before the design work was done and a lot of back and forth. The homeowners were involved throughout the design process. Since Kathy had built a big home before, she knew what she was doing and provided us with scaled drawings. We had to turn them into construction documents, but she made that effort very seamless. It was all laid out to the way they wanted to use the house.”

Two areas that Kathy and Mike definitely had a hand in were the “golf locker room” and the personal laundry room located within the master suite’s dressing area. (A second laundry room exists within the attached guest quarters, which comprise four bedrooms with en suite bathrooms, a communal living area, and a kitchenette.)

“[The architect] always wanted to have the washer and dryer area away from the master bedroom, and we wanted it off the bathroom in the master s to make that area a place where they could keep all their golf hats — “If you play golf, there’s lots of hats,” says Mike — as well as windbreakers, golf balls, sunglasses, and anything else to do with the sport. “When we leave to play golf, everything’s there. It’s just a nice little organized golf locker instead of a laundry room. I get a lot of enjoyment out of that room.”

The couple also derives much enjoyment from the home’s 1,620 square feet of covered outdoor living space. “We like having friends and family over, and that area turned out great for that,” Kathy says. “Plus, Mike loves to barbecue and wanted to be right in the middle of everything going on, so we gave him his own outdoor kitchen.”

By no small coincidence, Mike’s outdoor kitchen leads directly to an outdoor seating area that he and Kathy like to call the “man cave,” featuring a fireplace and flat-screen TV. From there, a loggia lined with bougainvillea leads to the swimming pool and whirlpool spa, which doubles as an elegant water fountain when not in use.

Also located here is the fire pit. Comfortably accommodating uite instead,” Mike says. Altevers had originally drawn in a main laundry room near the garage. The couple chose instead 16 people, the fire pit was an area the couple knew would be ideal for group gatherings and evening conversations.

“We spent a lot of time with that fire pit, trying to figure out how far you had to reach to set down your drink or put up your feet, and that everyone sitting there could easily see each other,” Mike says. “And we really paid attention to the elevations. You can be in the kitchen and look out to the casual dining area, through the man cave, through the fire pit, right to the lake. Everything draws your eye to the lake and the mountains. You have to see that ahead of time and really respect that what you are trying to do is bring the views to every part of the home.”

Asked what they love most about their new 6,833-square-foot home, completed last fall, Kathy is quick to respond: “We love the outdoor living area, and we love the pool. We love our bedroom, and we love walking into the home and seeing that view. We just feel lucky every day to be here.”