Supporting Local Non-Profits, One Deal at a Time 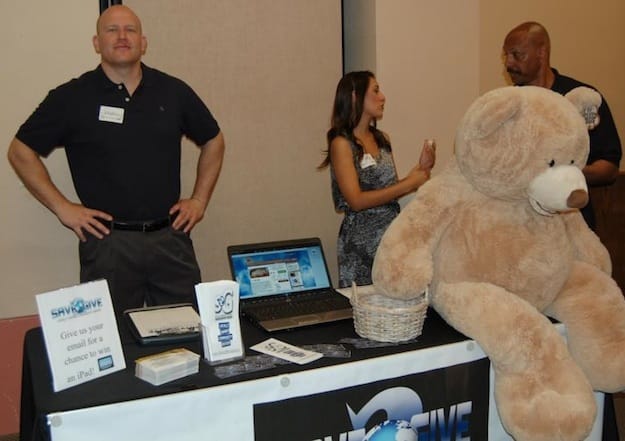 When Jeremy Roos returned to the desert in 2010, it was the start of a new chapter in his life.

The Palm Springs native had been working in the San Diego mortgage industry. The company he worked for promised to save homeowners from foreclosure through loan modifications — and Roos believed it —but ultimately, he and the people he tried to help ended up losing their homes.

Roos came back to the desert without a job, house or money — and saw his hometown was suffering, too.

“The donations to non-profits were down, businesses were having a hard time getting people in the doors and families couldn’t take their kids out to the movies,” Roos said.

“When Jeremy told me that he wanted to do something to help our local community, I was completely onboard,” said Alexsis Andrea, Roos’ business partner and fellow Palm Springs native.

“I’ve known Jeremy for 16 years…and when he wants to accomplish something, he’s going to do it,” Andrea added.

The pair began offering text message marketing services for local businesses before moving on to a daily deal network that promised to raise money for local non-profits.

Roos quickly became frustrated with the system, which only gave non-profits a 5 percent cut while making it difficult to recruit new charities. Roos decided to create a deal network from the ground up that would focus on benefitting local charities and schools.

Soon after, Save2GiveDeals.com was born.

Roos, Andrea and a third partner, Bryan DiBacco, launched the deal site in May 2011. The idea was simple: They would offer daily deals, similar to Groupon or LivingSocial, but 10 percent of the purchase price would be donated to the buyer’s school or non-profit of choice.

By creating the deal network from the ground up, Save2Give Deals would have the flexibility to continually include new organizations.

While many of the site’s deals feature local businesses, a number of national deals allow friends and family to support desert non-profits from around the country.

The program is free for non-profits, who are only asked to help promote the deals. There is also no upfront cost for businesses to offer a deal, which can have unexpected benefits.