Sweet Basil is Among 5 New Restaurants in Greater Palm Springs 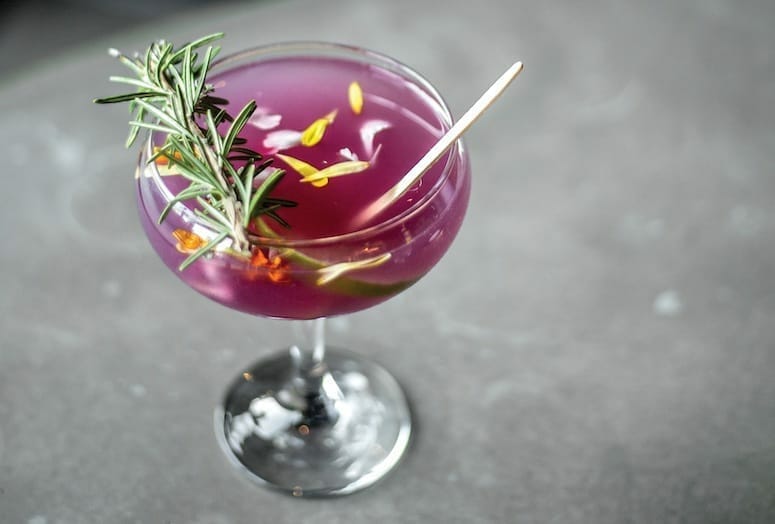 Overcoming a bevy of challenges, plenty of pivoting, and a fair share of delays over the last year, several Coachella Valley restaurateurs (finally) opened new, standout venues that are drawing locals and visitors to the table. Here are five of our favorites. 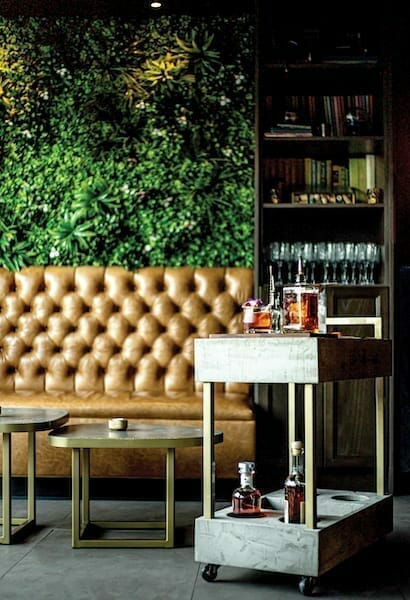 If you didn’t hear about this sexy speakeasy in the Uptown Design District when it soft opened last fall (with a sewing machine in lieu of a sign out front), we’re here to spill the beans ... or bourbon, in this case. Living up to its name, the menu puts an emphasis on tailoring classic cocktails to give them a fresh spin. The Manhattan swaps in amaro for vermouth, for example, while the Ward 8 gets a boozier boost by leaving out the OJ and adding a dash of orange bitters. There are plenty of original drinks too, like the gin-based Tea Party, with yuzu, yellow Chartreuse, and earl grey. The house’s roving Old Fashioned cart tailors the classic whisky drink to guests’ specifications tableside. 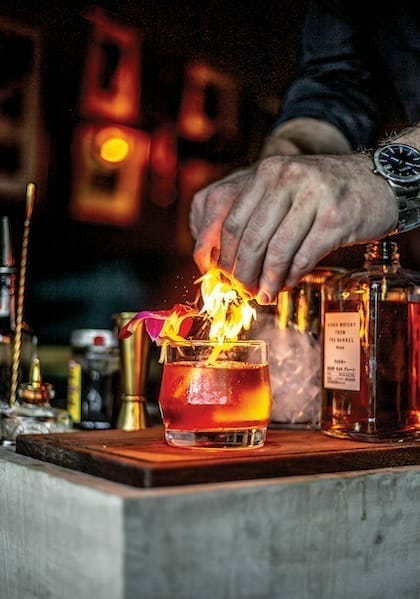 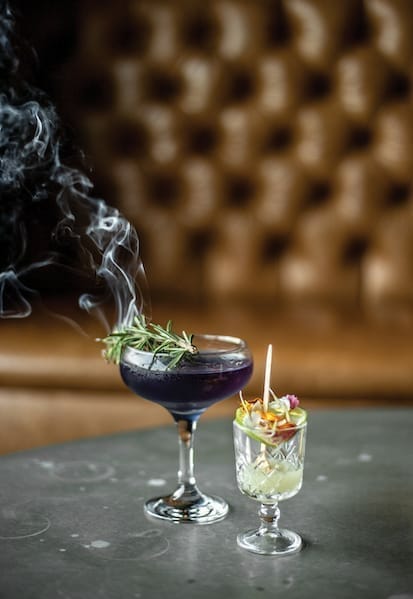 At Tailor Shop, the Tea Party changes color when the Yuzu shot is added.
It’s the brainchild of Engin Onural, chef and restaurateur behind Sandfish Sushi and Whiskey in Palm Springs and The Venue Sushi Bar & Sake Lounge in Palm Desert. Almost everything inside the dimly lit den’s space — from the streaked marble bar to the retro industrial-style table lamps, to the cyan-colored velvet banquettes — was custom built. On nice evenings, a front wall of glass doors slides open, giving way to a front outdoor patio for sipping under the stars. While drinking is the name of the game here, there’s a small plates menu, with a few dishes gleaned from Sandfish, like the spicy tuna tostada, wagyu carpaccio, and Spanish octopus, plus some Tailor Shop-only bites including a fromage-and-prickly pear dip paired with baguette slices. tailorshopps.com 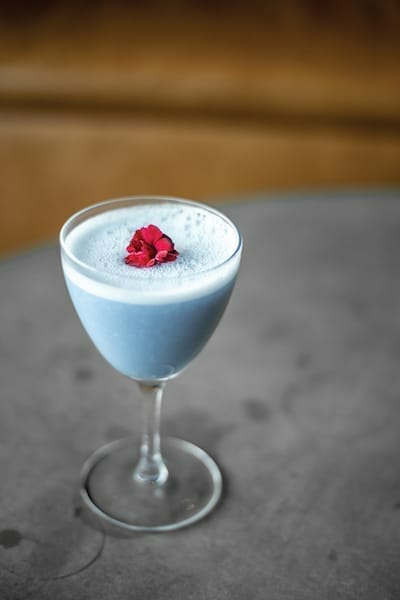 With an art-filled dining room (check out the Warhol!), posh patio, glam bar, and a California-meets-French bistro menu with a heavy dash of whimsy, Bar Cecil became one of the hottest reservations in town even before it opened last spring.

It’s a collaboration between the owners of boutique hotels Sparrows Lodge and Holiday House; the partners in Lightning Bar Collective, the group behind the nearby Villa Royale hotel; and executive chef Gabe Woo, who made a name for himself on the local dining scene with the family-style communal dinners he helmed for years at Sparrows.

Here, Woo incorporates locally sourced seasonal ingredients while putting his own spin on classics like steak frites with a mushroom duxelles butter; a pretty puff pastry-crusted caramelized onion tart; and deviled eggs done with house-pickled mustard seeds and the house aioli he created as a go-to accompaniment for dishes from the grilled artichoke to the burger on brioche.

Taking an azure-hued seat at the bar for bites and cocktails served in gorgeous glassware (don’t miss The Brock, a margarita play gussied up with a St. Germain foam float) is perhaps the best way to experience the buzz of the place. With season now in swing, the crew has rolled out a walk-in only, late-night menu running from 9 to 11 p.m. Fridays and Saturdays. It offers some of its most popular small plates, including the tart, colossal shrimp cocktail, oysters on the half shell, and fresh-cut fries. If you’re looking for luxury, try the $50 Beluga vodka martini tricked out with a caviar-topped deviled egg and sunchoke chips. barcecil.com 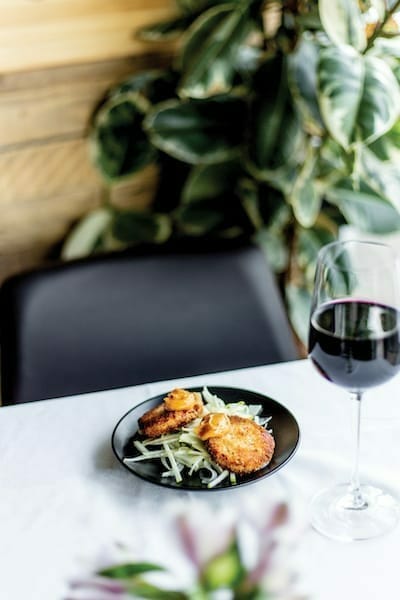 When the pandemic sidelined her spring 2020 opening plans, chef Sally Hill’s new restaurant rode a roller coaster of shutdowns, re-openings, rules, restrictions, capacity limits, and other curveballs when it finally opened its doors later that year and began operating at full throttle last spring. One silver lining amid all the red tape is the covered outdoor patio she unveiled along El Paseo. The white cloth-covered tables, hanging plants, and strings of lights have come to define the little eatery that could … along with the food, of course. 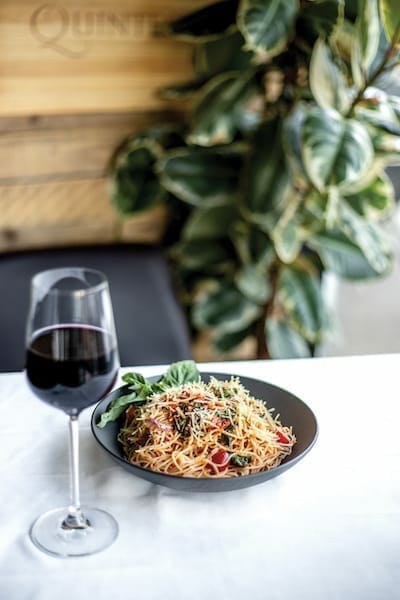 The Sally Pasta at Sweet Basil.
After operating their first Sweet Basil in Big Bear for more than a decade, Hill and her husband Martin had enough of the cold and headed back to their home in Palm Desert (Hill earned her culinary degree at College of the Desert) to open the new incarnation, focused on a global menu that toggles between comfort fare, veggie-forward dishes, and customizable pastas. Think: a roasted beet-and-quinoa salad tossed with mint, pistachios, and goat cheese; a chipotle-maple pork tenderloin; shrimp and grits that get California-ized with a tomato-basil relish and sauteed arugula; and old-fashioned chicken parm with capellini. A signature appetizer is the sautéed lobster cake, plated with a fresh fennel-apple slaw and kicky aioli. There’s also an array of tempting desserts, including a plate of housemade mini donuts with a trio of dipping sauces — perfect for giving into your sorry-not-sorry sweet tooth at the end of the evening. sweetbasilpd.com

This eatery opened inside the Hilton Palm Springs last March, but the Heyday’s signature smashburger — an uber-thin Harris Ranch beef patty on a potato bun layered with shredded iceberg, caramelized onions, a housemade Thousand Island-style sauce, and melty American cheese — had a loyal following of local burger buffs long before that. First, owners Brad and Crystal Reihl were hawking burgers at VillageFest. Then, they offered curbside pickup at the Cole Hotel and, later, the Hilton parking lot as part of their pandemic-pivot plan.

Now, the couple has the brick-and-mortar venue they always wanted, with the majority of their current business coming from locals and hotel guests dining onsite, indulging in their smashburgers, fried chicken sandwiches, crinkle-cut “late-night fries,” and killer Romaine-based salad done with pepitas, breadcrumbs, and parmesan. Everything from the salad’s ranch dressing to the pickles in the Thousand Island to the restaurant’s plant-based Magic Mushroom burger is made in house. The couple has also perfected their cooking technique, using a dowel to smash the quarter-pound patty on a flat-top grill to keep it super juicy while giving it that perfectly crispy, old-school burger stand-style edge.

Almost a year in, the Reihls are beefing up their craft cocktail and natural wine programs, bringing back their cult-favorite lobster rolls, and adding rotating specials like fried artichoke hearts and poutine fries along with weekend breakfast sandos. theheydaypalmsprings.com 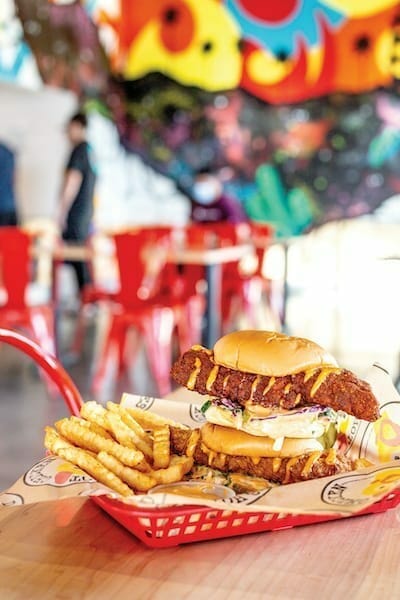 In 2017, spice-seekers queued up in an East Hollywood parking lot where a late-night pop-up stand for a bite of the saucy Nashville-style hot chicken tenders that had become a social media sensation. Five years later, Dave’s Hot Chicken has morphed into an international franchise with dozens of locations stretching as far as Toronto, backed by A-list investors such as the rapper Drake. With its July opening in Indio, the restaurant gives locals a chance to feast on chicken blazing enough to match our summer heat.

The menu is a simple with chicken tenders tossed in a proprietary spice blend, deep-fried to crunchy, crispy perfection and served with a slice of white bread (a la its old parking lot days) or on a slider bun — plus sides, including kale slaw, pickles, a chipotle mayo-based “Dave’s sauce,” and crinkle cut fries that you can upgrade to cheese fries. You can customize your heat level from no spice through various versions of hot, medium, and mild  — all the way up to tear-inducing reaper level. But maybe save that one for your second visit. daveshotchicken.com

• READ NEXT: 5 Places in Greater Palm Springs to Satisfy Your Bloody Mary Craving.