The Rolls-Royce Dawn is Pure Luxury 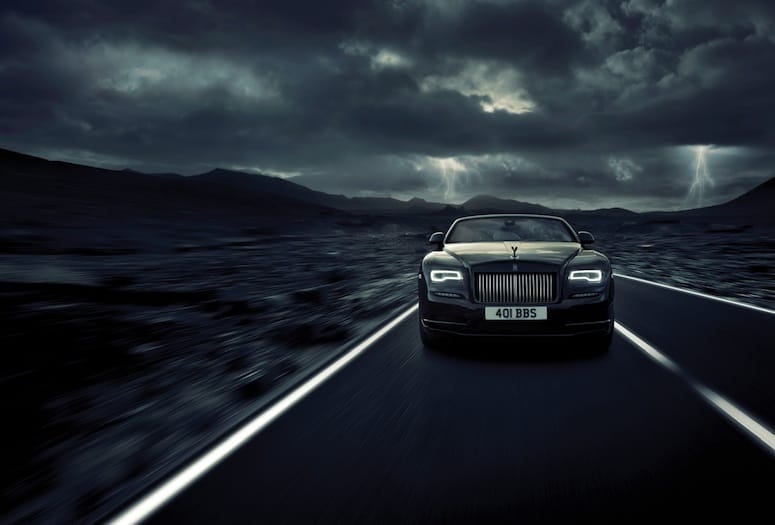 There are very few automobiles on earth that can dominate the landscape quite like a Rolls.
PHOTOGRAPHS COURTESY OF ROLLS-ROYCE NORTH AMERICA

My first time behind the wheel of the Rolls-Royce Dawn took me along the steep coastal bluffs of Cape Town, South Africa. The two-tone gray Dawn had a brilliant orange leather interior. The road was a twisty, two-lane stretch of asphalt hundreds of feet above sea level known as Chapman’s Peak Drive. With 114 curves across just over 5.6 miles, the road borders craggy natural rock walls on one side with an uncomfortably low barrier keeping motorists from plunging into the inky Southern Atlantic on the other. It sounds rather treacherous but it’s worth the risk just to enjoy the vast, panoramic vistas of the South African coastline that get ever more spectacular around every bend.

My second Dawn drive was equally as memorable: a three-day journey in a white Dawn with a deep-red interior and dark-chocolate-colored wood paneling, cruising through the verdant, pastoral landscape of the United Kingdom from Rolls-Royce’s Goodwood, England, headquarters to Edinburgh, Scotland. While we were there primarily to experience the Rolls, the itinerary also saw us sampling amazing local delicacies, walking through fields of Queen Anne’s lace, and lodging in establishments whose succession of proprietors had spent anywhere between 150 and nearly 600 years honing service and hospitality.

My most recent encounter with the Dawn was here in Palm Springs, in a special-edition white-on-white Dawn that the House of Rolls-Royce Bespoke Design Studio had prepared as an homage to the Palm Springs area and its influence in midcentury modern design. I didn’t drive this particular car, as it had been sold to a customer just days before, but that’s just as well, as riding passenger gave me more time to take in the car’s unique orange and turquoise leather trim and high-contrast, open-pore, linear-striped woodwork while the warm Coachella Valley air caressed the nape of my neck.

As we glided along Highway 111 in the Palm Springs Collection (yes, that’s the car’s official name.), I reflected upon my previous Rolls excursions, from the natural majesty of Chapman’s Peak in South Africa to the fragrant fields of the English countryside and the monolithic structures of Edinburgh, Scotland, to a time traversing the unforgettable desert super bloom that left visitors to the southwestern United States awestruck for months.

Few automobiles on earth could measure up to scenery like this and, particularly with its top stowed under the yacht-like, wood-trimmed rear tonneau cover, few cars allow such an intense immersion in it. First, only a convertible allows full enjoyment of any place where beauty comes from all directions, including above and below, if you dare look down on Chapman’s Peak Drive or Highway 79 south from Banning toward Idyllwild. Second, as a Rolls-Royce, the Dawn is a spectacle in and of itself, with all the presence and power expected of the brand and a cabin where luxury, too, comes from all directions.

Rolls-Royce considers the Dawn to be the sexiest car it has ever built. I’d be hard-pressed to disagree. The long, broad hood, gleaming grille, slab-sided body and rear-hinged “coach” doors instantly identify it as a Rolls, but with its gently rising rear fenders — to which Rolls anthropomorphically refers as “the feminine hips of Dawn” — ahem — the model appears less formal and more sensuous than Rolls-Royce’s other vehicles, including the Wraith coupe and Ghost sedan with which it shares its underpinnings. The headlamps are circumscribed by a ring of light that imparts to the car a highly determined gaze, though not the stern look that typifies the visages of most Rollers of the past. If any Rolls-Royce could ever be considered “chill,” it would be the Dawn.

Only a convertible allows full enjoyment of any place where  beauty comes  from all directions, including above  and below, if  you dare look  down on Chapman’s peak drive or Highway 74 south from banning toward Idyllwild. 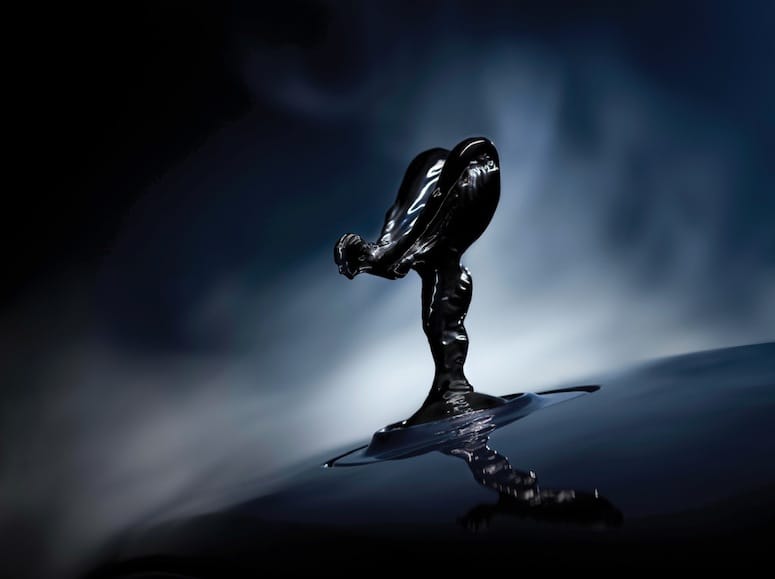 The Spirit of Ecstacy, aka Ellie in her Nightie, was created in 1911 and was originally silver.

Should storm clouds fill the sky, the six-layer fabric roof rises in utter silence to seal the cabin within 22 seconds. The process can be performed at speeds up to 31 miles per hour, and when you stop, umbrellas can be deployed from the front fenders once the doors are opened. Even better, the raised roof’s low silhouette subtracts none of the innate beauty. Through the aforementioned Bespoke Design Studio, Rolls-Royce has been flexing its aesthetic, displaying Dawns with stunning contrasting color combinations that include bright red, bright blue, and even yellow roof fabrics. Show them an exotic thread and they’ll find a way to make a roof out of it. Or at least something similarly spectacular that can withstand the elements; after all, areas of extreme beauty are often areas of extreme conditions, and Rolls-Royce engineers assemble every car to endure for generations, not just the term of a lease.

Open the coach doors and many pleasures await — and not just for the passenger riding shotgun. While most convertibles compromise rear seat space to make room for the folding roof, the Dawn is a true four-seater, welcoming fully grown adults in any of its four deeply padded seats. Entering the rear bucket seats involves just a light tug on a chrome-capped handle at shoulder level on the front seats. 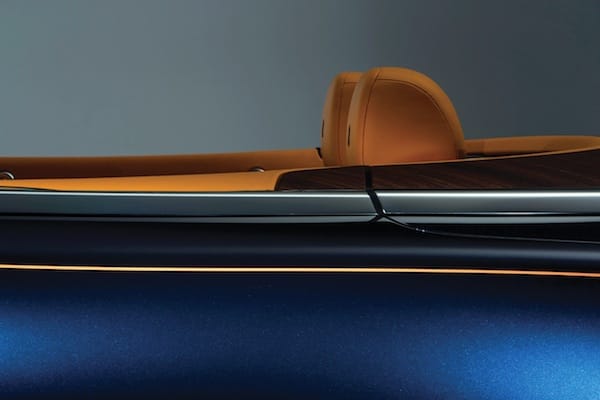 (Once you’re back there, kick off your shoes. There are no words that can adequately describe the pleasure of running one’s toes through the deep wool carpets of a Rolls-Royce.) Wind buffeting in the front and rear is minimized thanks to the car’s rather high windowsills, yet the actual hip-point of its seats is also rather high vis-à-vis other motorists, thus providing a vast, panoramic view of one’s surroundings. With this sort of room and a great view in all directions, the Dawn offers a pleasure-craft-like experience. Customers who enjoy the yachting lifestyle will feel right at home here. 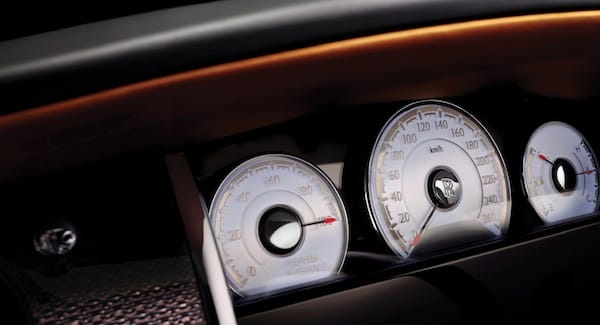 The Rolls’ gauges are simple and elegant.

I could rattle off the Dawn’s list of sybaritic delights, which includes the expected buttery hides, gleaming aluminum, polished metal, book-faced wood veneers arranged almost exactly as in the Wraith coupe, and a suite of BMW-derived infotainment features. But to break the Dawn down to a list of amenities could invite comparisons to less expensive cars like the $131,400 Mercedes-Benz S-Class Cabriolet or the BMW 6-Series Convertible ($86,700), which in some cases offer even more niceties than the Dawn. And as many longtime Rolls-Royce customers know, a stats list utterly misses the point of choosing such a car. Indeed, what truly sets a $345,000 car like the Dawn apart from, say, a comparably equipped Mercedes-Benz is not the array of its amenities, nor its robotically perfect assembly. To the contrary, it’s the distinct warmth that comes when a human being, not a robot, mills a piece of wood trim, smooths a piece of leather over a door panel, or sews a steering wheel with the company’s signature stitch. Rolls-Royce employs hundreds of such craftspeople, who, for generations, have skillfully assembled the brand’s automobiles by hand. Barely noticeable to the untrained eye, the subtle variations — those “perfect imperfections,” as I like to call them, evidential of hand-craftsmanship — are what make cars like the Dawn a point of unassailable pride. 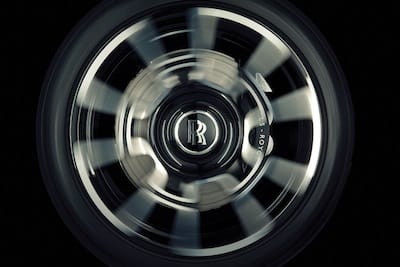 Every bit of a Rolls is meticulously made and assembled; every inch of leather in a Rolls Royce is sewn by hand; counterintuitively, some Rolls owners are able to step away  from their vehicles for  a moment or two. 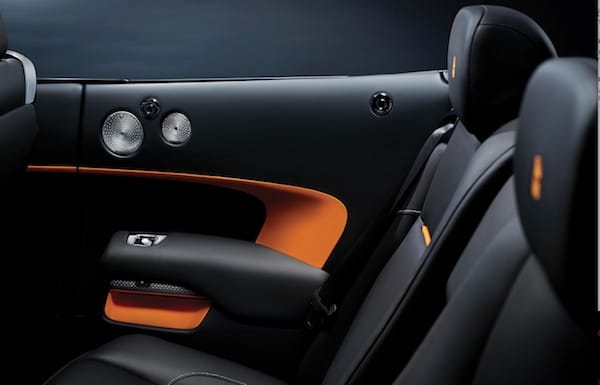 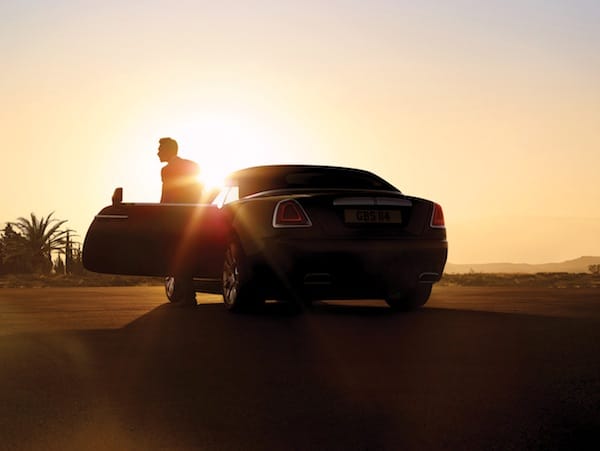 With a 563-horsepower V12 engine, the Dawn is anything but underpowered. Rolls says the Dawn can hit 60 mph in less than five seconds, and I believe it. But the Dawn is deceptively large, exceeding the new BMW 7-Series by 2 inches in both length and width. At 5,677 pounds, it weighs nearly 100 pounds more than a Cadillac Escalade — yet another reason to keep speeds reasonable (that said, in my experience the Dawn never lost its composure, whether negotiating the curves of Chapman’s Peak, managing the medieval cobblestone pathways of Southern England, or urgently scrubbing speed to avert an oblivious SUV pulling out of a Starbucks driveway along Highway 111).

At the end of the day, a more leisurely pace best suits the Dawn. This allows onlookers ample time to appreciate its lovely visage while occupants revel in its sumptuous trappings without turning the landscape into a blur. After all, when your surroundings are as stunning as those of Palm Springs, you don’t want to miss any of it.

It’s the distinct warmth that  comes when a  human being, not  a robot, mills  a piece of wood  trim, smooths  a piece of leather over a door  panel, or sews a steering wheel with the company’s  signature stitch.