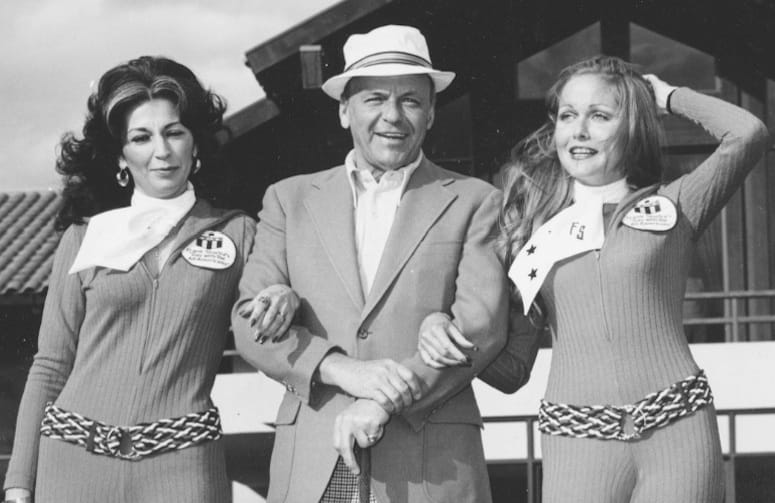 Hoboken, New Jersey, has a great cultural history. It’s where Stephen Foster wrote “Jeanie With the Light Brown Hair”; where Elia Kazan directed the Oscar-winning On the Waterfront; and, 100 years ago, where the most celebrated interpreter of the American songbook, Francis Albert Sinatra, was born.

With all its charms, however, Hoboken was never known for its golf. Even today, there are no actual courses in the city; the closest place to play is at least 20 miles away. So it’s not surprising that Hoboken’s favorite son didn’t grow up dreaming of par-3s and 19th-hole schmoozing in the men’s grill. He was not to the clubhouse born.

That also goes a long way toward explaining why, even after Frank Sinatra earned his first million and moved to Palm Springs — one of the capitals of American golf — he mostly took up the game to be sociable. He was never all that serious about it.

His former valet, the late George Jacobs, noted that when Sinatra played a round with his pals, if they sunk balls in a lake, they would just take out other ones. In the rough? No problem: Just kick it onto the fairway. “Dean Martin was the only real golfer in the bunch,” Jacobs told Golf Magazine in one of his last interviews. “Dean would leave a party early and get up at five or six so he could play. Sammy and Frank, if they hit the ball in the rough, wouldn’t look for it. Frank could hit it pretty well off the tee, but that was about it. He would hack it around, having fun, you know?” It wasn’t that he didn’t have the chops. Ace golf writer Barry Salberg recalled on golf.com that Sinatra was “a fair player, with a rhythmic swing and a good short game.” Those are descriptions most golfers would like included in their obits.

Golf, however, is also a sport nearly impossible to totally master. That fellow from Hoboken, the guy who sweated over sheet-music chord changes and kept arrangers like Nelson Riddle and Billy May in awe with his breath control and meticulous preparation, the guy who really, really worked to get that Oscar for From Here to Eternity, met an unconquerable nemesis in the game of golf.

His good friend, comedian Tom Dreesen, who toured with Sinatra for 12 years, said, “He was too impatient for golf.”

In their book, Golf’s Hall of Shame, Bruce Nash and Allan Zullo recall the first round of golf Sinatra ever played with superstar Arnold Palmer. For hole after hole, Palmer patiently watched as Ol’ Blue Eyes spent much of the time digging out of fairways-adjacent. After the round, Frank asked Arnie what he thought of his game. “I prefer golf,” Palmer deadpanned.

Palmer needn’t have worried about Sinatra taking a poke at him. Sinatra had a sense of humor about his game. Lucille Ball’s husband, the late Gary Morton, told writer Salberg about a match at Tamarisk Country Club where he watched while Sinatra kept at it, at one point reminding the chairman of the board that, clearly, the ball had no idea whom it was messing with. “Frank went up to the ball and said, ‘I’m Frank Sinatra. I’m a very big recording star.’ The next shot was super.” The Man. The Tournament. The Golf Cart.

To Sinatra, golf was not an end in itself; it was a means to an end. And a helluva good way to hang out with friends.

One such buddy was pro golfer and commentator Ken Venturi, whom Sinatra once introduced onstage as his “best friend.” At the time of their close relationship, Venturi was the golf pro at Mission Hills Country Club but palled around a lot with Sinatra. Not that Frank didn’t test the friendship: Venturi wrote in his book, Getting Up & Down: My 60 Years in Golf, that Sinatra’s minions would every so often feed him “confidential” stuff about the boss to see how big Venturi’s mouth was. (It was quite small.)

As Sinatra got older he developed problems with his hands and had trouble gripping the club. Some of it was due to carpal tunnel syndrome, though another cause might have been from an injury he sustained in a stage fight he filmed with co-star Laurence Harvey for the political thriller The Manchurian Candidate. Playing golf became painful. But he still knew the value of a round of golf: It brought people together.

Perhaps it was that belief that was the genesis for the Frank Sinatra Invitational, which took place in November 1963. Sinatra knew golf tournaments were a great way to raise money for charity. They were also a good excuse to fraternize with buddies. As a template, he looked to the Palm Springs Desert Golf Classic. It had begun in 1960 and featured major Hollywood celebrities and pro golfers playing together. A few years later when Bob Hope lent his celebrity to the tournament, the proceeds helped create the Eisenhower Medical Center. Sinatra figured he’d give a party, call it a tournament, invite his friends, and donate a bunch of dough. The purse he set up was $60,000 and the beneficiaries were the Boys Club of America and College of the Desert. To put that prize money into perspective, when Hope and Arnold Palmer had put the venerable Palm Springs Desert Golf Classic on the map, the awe-inspiring purse was just a few dollars more: $77,500.

The course that Sinatra chose as the site for the tournament was his favorite, Canyon Country Club, or what is now called Indian Canyons Golf Resort. It was his favorite place to play because the club’s pro, the late Jack Koennecker, was usually there by his side as he navigated the course. It also didn’t hurt that the club’s GM often sent a plane to Las Vegas to pick him up.

Canyon was also special to him and to the other Hollywood celebrities because of its reputation for privacy. It wasn’t intentional. Canyon was difficult for most out-of-town visitors to find, tucked away at the foot of Mount San Jacinto in a southern wind-free zone, camouflaged by a labyrinth of side streets.

Sinatra pulled out all the stops for his tournament. At one point he even suggested that each guest receive a gold putter, an idea eventually deemed impractical for play. He invited major Hollywood and sports superstars. His press agent at the time, La Quinta resident Jim Mahoney, remembers assembling the list of the biggest names in show business and athletics and getting 100 percent RSVP acceptance. “Frank asked you to come, you came,” he says. The tournament was a big success but it lasted only that one year. Some believe it prompted Bob Hope to put his name on the Palm Springs Desert Golf Classic two years later. Hope and Sinatra were territorial when it came to Palm Springs.

Jim Mahoney, in his upcoming memoir Rat Pack Flack, recalls his efforts at trying to get another major PGA tour to come to the desert in the 1970s, schlepping to Augusta, Georgia, at the PGA’s request to present his case for a Sinatra tourney. The board left Mahoney out on the links cooling his heels, which should have been an omen. Eventually, the board gave him the news: There would be no PGA Sinatra tournament in the desert, not then, not ever.

How come? Confronted by Mahoney later, Hope admitted that it was he who put the kibosh on the whole idea. Frankie wasn’t going to swoop in on the pro-am celebrity sweepstakes while Mr. Hope held sway. Eventually, Sinatra’s “little party in the desert,” the Frank Sinatra Celebrity Invitational Golf Tournament, was reborn in 1989 as a fundraiser for the Barbara Sinatra Children’s Center at Eisenhower. It never became a PGA event, but it is the one celebrity-driven tournament in the Greater Palm Springs area that year in and year out attracts the biggest stars to the desert.

California historian Kevin Starr, in his book Coast of Dreams, describes the appeal of the tournament: “Of course the real action came from the multiplicity of entertainment celebrities of past and present who joined Frank and his wife Barbara on the links and for the tournament’s gala. Here was Palm Springs at its apex, the celebrities, the parties, the photographs of Frank and Barbara on the cover of Palm Springs Life and, above all else, the illusion that in Palm Springs you could escape time alongside celebrities who had kept you company throughout your life.”

And Frank was just the someone to watch over all of it. Frank Sinatra may be wondering why his caddie hasn’t pulled the damn pin.