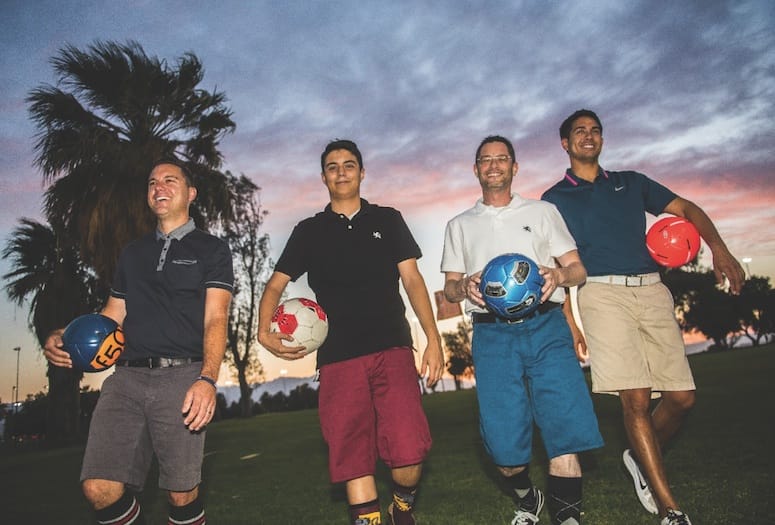 Which of these men secretly carries around a photo of Pelé in his wallet? Could it be, from left: Hugh Van Horn, Alonso Medel, Steven Biller, or Kyle Wagner?
Photos by Chris Miller/imagineimagery.com

The futility of waiting for the wind to die, if only for a slight moment, deepened as I readied for tee off on my first-ever round of FootGolf at The Lights of Indio Golf Course.

A cross between golf and soccer, the game — played with a regulation size 5 soccer ball on a course with shortened holes — plays exactly as you might expect: The player who finishes nine or 18 holes with the fewest shots wins.

Reportedly first played in the Netherlands in 2008, FootGolf has become an international phenomenon, with tournaments drawing players from up to 30 countries and a World Cup scheduled in January 2016 in Argentina. Meanwhile, the American FootGolf League, the game’s U.S. governing body and member of the Federation for International FootGolf, opened its head-quarters in downtown Palm Springs.

“It’s an incredible opportunity to bring a new sport to the United States. Most people will never have that chance,” says AFGL President Laura Balestrini, a former resort marketing professional who learned about the game with her husband, Roberto Balestrini, while watching an interview on a television show from Argentina. Roberto founded AFGL and now serves as FIFG vice president. “When we started to look at FootGolf, we were living in Temecula. We decided to move here to develop the sport. It helps that we’re in the middle of huge golf community.” The player who finishes nine or 18 holes with the fewest shots wins.

It’s a game for soccer’s free-kick specialists. None of the other players in my foursome — mortgage guy Hugh Van Horn, small business guru Kyle Wagner, and college student Alonso Medel — bends it like Beckham. And none of us had ever played FootGolf. We’d barely heard of it.

Dressed in knee-high argyle socks, golf shorts, and a crisp white polo for our 7 p.m. tee time, I “drove” the ball with the laces of my turf shoes (the rules prohibit cleats) and landed it in a decent position for my next shot. The other players’ balls dropped in nearby positions, and we all sunk them in three or four shots.

That was the easiest hole.

After driving from the second tee, I had to bend my second shot around a tree but blasted it high into its branches as the other players uttered a drawn-out “Ooooooh!” that sounded like Gregorian chant.

At subsequent holes, Wagner also defoliated a tree, Van Horn put his ball in the water, and I landed one in a bunker, where the rules prohibit a running start or “scooping” the ball from the sand. Medel’s frustrations peaked on the last hole, where he overshot the green and then missed two “putts.”

The Balestrinis organize tournaments and work with golf courses nationwide. “We now have 420 courses in 48 states, and an organized structure for the players,” Laura says, adding that this year’s tour started in May in South Florida and continues this month in Tacoma, Wash., and Sacramento.

In addition to the Indio course, Desert Willow Golf Resort in Palm Desert welcomes FootGolfers, and the Desert FootGolf League will organize regular play and tournaments.

My foursome will be ready. On our first outing, we all averaged about five shots per hole and agreed to come back, add trash talking (although the rules explicitly call for gentlemanly behavior), and master the game with the same passion as those guys who swing those ridiculously long sticks. (At right)  Hugh Van Horn attempts to use mind control to will the ball into the hole.