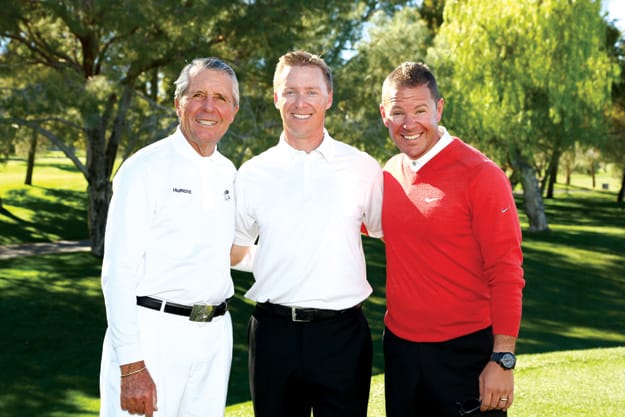 Though the mood may be idyllically mellow at The Vintage Club in Indian Wells, the members’ approach to improving their golf game strikes far beyond a leisure pursuit.

Limited to fewer than 40 of the club’s most driven members, the school has become a Vintage mainstay since David Woods took over as director of golf. “I like to constantly find ways to enhance the member experience,” Woods says. “Many of the people who belong to our club came here first as a golfer. And along with that goes the desire to constantly improve their game.”

The instruction takes place at the club’s practice facility and on its Tom Fazio-designed Mountain and Desert courses — ranked by Golf Digest as California’s 25th and 26th best courses, respectively.

“I would rate this school as one of my top golf experiences,” says Tony Esernia, a student and Vintage Club board member. “It’s right up there with playing Augusta, Cypress, Pine Valley — all these wonderful golf courses. We have a big waiting list, and you have to cut it off at a certain point or you don’t get the quality time with the all-stars.”

A supporting cast that offers an almost 2-to-1 teacher-to-student ratio buoys that quality time over two eight-hour days.

Participating for the third time, Esernia has noticed an immediate improvement. Of his sand study under Kuchar, Esernia says, “It was an emphasis on placing almost all my weight to the left and using a wider, open stance. It really changes the angle of attack, and now I sometimes actually aim at a bunker depending on the hole.”

While the gregarious and philosophical Foley — also swing coach to Justin Rose and Hunter Mahan — worked with students on the back range on day two, Kuchar strolled amid his Vintage neighbors on the practice green. Emphasizing a putter’s “connection to the body” and the elimination of “moving parts” during the putting stroke, the world’s one-time 20th-ranked player and defending Players Championship winner intermingled practice drills with yarns about his playing experiences and his fondness for one of the Coachella Valley’s most celebrated clubs.

“The desert is a spectacular place,” says Kuchar, two days removed from a T-16 showing at the Humana tournament. “Here at The Vintage Club, just driving in the gates, I have the feeling that we’re in a really special place. Tucked right up against the mountains — which still seem fake to me after coming here for six years — it’s just an amazing backdrop. The conditions are beautiful, and the first year we came out here and stayed with friends, we were blown away with how welcome we felt.

“One of the things that always amazes me is how active the membership is here,” Kuchar continues. “From working out, to using a trainer, to taking lessons from the pros, to getting out and playing: People are really enjoying their lives and looking to become better at whatever it is that they’re out to do, whether it’s golf or fitness.”

Kuchar, known as one of the most likeable players on the PGA Tour, and Foley enjoyed talking with rather than at participants.

“It’s fun to be involved,” Kuchar says. “Maybe that’s why I do well at the Humana Challenge. Playing in the pro-am, I enjoy interacting with people. So it’s being out here and getting with the members and trying to help them, but always learning about what they did just to be out here — it’s fun for me. I’ve done the school for four years now. This year, with Gary Player and Sean Foley, it’s a statement about the members really enjoying learning new skills and improving themselves. Getting proper instruction is the way to get better, and it’s fun to see the members so eager to get better.”