When Keith McCormick and his wife Desley arrived in Palm Springs with their kids, they got hooked on the architecture.
PHOTO BY JIM RICHE

Palm Springs has become synonymous with midcentury modern design, and several pristine, original examples of the era can be found among the homes scattered throughout, among other neighborhoods, Vista Las Palmas. But tucked in among those midcentury gems are 15 anomalous houses with their own quirky allure.

The single-story homes, known as Swiss Miss, are fronted by large, two-story A-frame eaves that stop just short of plunging into the ground. Their roofs are shingled, and if they provide sufficient protection, they also afford residents dramatic views through 18-foot walls of glass. The homes were designed by architect Charles DuBois and built — like the neighborhood’s William Krisel-designed midcentury homes — by the Alexander Construction Company.

Joan and Gary Gand, musicians and founders of the Gand Band, lived for 10 years in a 1955 Swiss Miss. The couple were told that the A-frame style was the brainchild of Joseph Dunas, one of the Alexanders’ partners, who owned land in Vista Las Palmas and wanted to build some homes with a different architectural style. “He wanted specifically to build some A-frame homes, but Krisel would not design them — he didn’t like the idea,” says Joan. “But DuBois did and he designed the unique roofline and details.”

“We loved the exterior curb appeal and the soaring living room interior because of the A-frame,” she adds. “We loved it because it was different, and rare, and there are only 15 of them.”

Despite the obvious reference to Swiss chalets, Gary has describe their former home as more “Fiji Frolic” than Swiss Miss. “It is definitely a tropical A-frame vibe, more island style, not at all Swiss,” Joan concurs. “If you look at traditional photos and paintings of island Tiki style you’ll always see the A-frame motif. But the name got coined about 15 years ago and it’s stuck. It’s a fun name and everyone knows what you mean when you say, ‘I live in a Swiss Miss!’ If they don’t, then you get to tell them all about it. The name was not used when these were originally marketed and built…we’d love to know what they called them back in the day.” 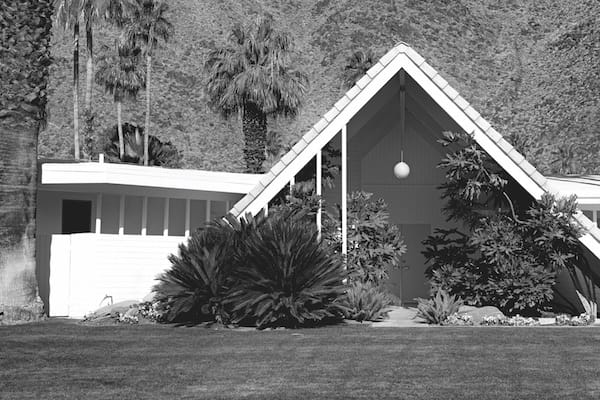 PHOTO BY JIM RICHE
With its eclectic mix of modernist, bland suburban, and Alexander homes (among others), Vista Las Palmas is the perfect ‘hood for Swiss Misses, like the one above.

Keith McCormick, owner of McCormick’s Palm Springs Exotic Car Auctions, bought his 1959 Swiss Miss for $175,000 in 1981. Like the Gands, he and his wife, Desley, didn’t know much about the house other than the fact that they liked the design and the location. “There were lots of movie stars who owned these homes back in the late ’50’s,” he says. “[The Alexanders] gave them huge plots of land and that’s why movie stars loved them. They could have a second home here that had lots of privacy so nobody could see them because of the landscaping.” The McCormicks’ 2,600-square-foot, three -bedroom, two-bath home ( the standard Swiss Miss layout) sits on nearly half an acre.

“What [DuBois and the Alexanders] did with these homes is that they were the first to have a very high ceiling,” notes McCormick. “If you consider a single-story house nowadays, we love ceiling heights, but [even then] DuBois loved the thought process of high ceilings in houses, and he designed the Swiss Miss to give you the feeling of not feeling cramped in.”

McCormick’s Swiss Miss has a storied past. Elizabeth Taylor, who lived just two blocks away, bought the house for her mother, Sara Sothern.

After Sothern moved out, the home was purchased by a man who later perished along with his mistress in an airplane crash. His wife, who lived in Los Angeles, didn’t know the house existed until she received a notice of default and discovered that her husband had bought it for the other woman. The McCormicks were able to purchase the home through a probate deal.

Although the Desert Lanai condo complex in central Palm Springs is not as well known as the Swiss Miss homes in Vista Las Palmas, it was also designed by DuBois. The 9-acre community was built in four phases beginning in 1961, and DuBois’ distinctive rooflines are replicated throughout the property. Samuel Fleming Lewis and Stephen Kladder — of Lewis & Kladder design studio and gallery in the Sunny Dunes Antique District — live in a 1,000-square-foot Desert Lanai unit Kladder purchased from his family in 2002.

“Stephen didn’t know anything about Charles DuBois before purchasing the condo from his family,” Lewis says. “We discovered the original DuBois construction plans in the condo several years ago and did a Google search [where we] found information about our unique home, DuBois, and the Alexander Construction Company.”

Although he might not have been as prolific as some of the midcentury masters, DuBois clearly left his offbeat, singular mark on a town that loves to embrace the unorthodox. 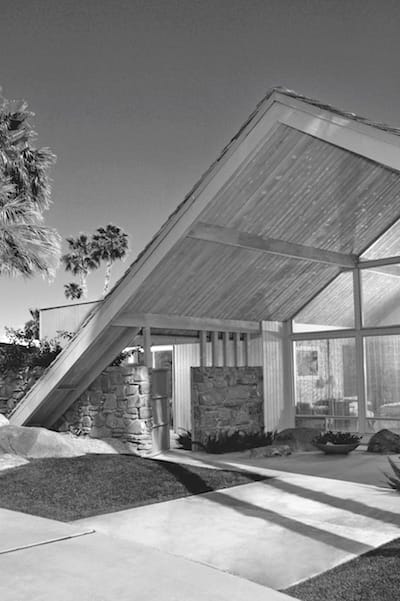 PHOTO BY DAN CHAVKIN
Gary and Joan Gand’s Swiss Miss, which they consider more tropical than alpine, is a pristine example of the breed.