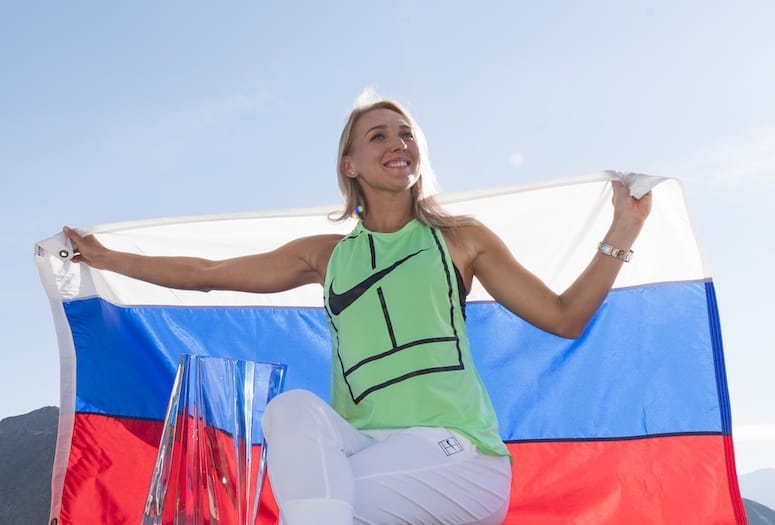 Neither rain nor snow nor sleet, nor heat so severe that it could have seared the bottoms of her tennis shoes, could keep Elena Vesnina from her appointed rounds with a crystal trophy and a check for $1,175,505 Sunday at the BNP Paribas Open tennis tournament.

Vesnina is the unlikely women’s champion. She entered this highly prestigious tournament seeded 14th. She had never advanced beyond the third round in a major. She had finished No. 111 in the world at the end of 2015, but her Wimbledon semifinal last year enabled her to make her way into the top 20.

Sunday, in front of an enthusiastic packed house in the 16,100-seat Indian Wells Tennis Garden, she did the unexpected, outlasting the eighth-seeded Svetlana Kuznetsova, 6-7 (6), 7-5, 6-4. When it was over, with Kuznetsova’s second-place prize of $573,680, the two Russians had pulled off a total heist of 1,749,185 U.S. dollars. Beware of the stock market dipping Monday, especially after two Swiss guys, Roger Federer and Stan Wawrinka, took the same amount home after the men’s final.

The women’s final, matching the 31-year-old Kuznetsova and the 30-year-old Vesnina, took 3 hours 1 minute. That made it either dramatic or torture to watch, depending on your point of view. If you likened it to a long march through an endless desert, you would not be far off. One measurement had the temperature on court at 119 degrees. Through this all, they played, often beautifully, often not. Many strange things took place in those three hours. 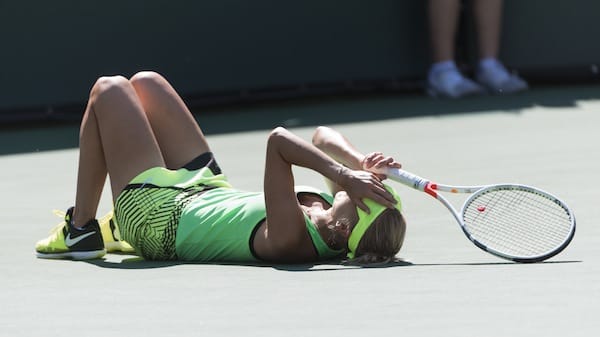 Elena Vesnina collapses to the court both in exhaustion and exhilaration after winning her first BNP Paribas Open title.

In a first set in which it was difficult to identify who had the edge, Kuznetsova won a tiebreaker when her shot at set point hit the net cord and trickled over. She did the usual insincere tennis player gesture that is supposed to indicate that you are sorry. One knows she was not, nor is any player in that spot.

“The net cord was a heartbreaking moment,” Vesnina said. “I was like, oh my God, I was fighting so much and we play a set for more than an hour and this is how it is going to end.”

The rest of the match continued with the usual baseline rallies, but it became clear quickly that in this match the advantage would not be with the server. When it was over, after Vesnina had converted the 35th break point of the match and converted the 16th service break to allow her to serve for the match at 5-4. The odds on her actually holding that serve to win the title were about 50-1.

She did, although not easily. In this match, nothing was easy.

Her first match point, achieved with a big backhand, got her to 40-15 right at the 3-hour point of the match. But she hit a forehand wide. Then, at 40-30, Kuznetsova sent her service return long and Vesnina, having just won her most prestigious title, collapsed on her back, either in joy or exhaustion.

(Elena) Vesnina had a realistic view of what had happened. Despite her semifinal run at Wimbledon last year and the gold medal in doubles in Rio she shared with Ekaterina Makarova, her title here was on nobody’s radar, especially because she had lost in the first round of qualifying here last year.

Perhaps Kuznetsova wanted to collapse, too, but the veteran and two-time major event winner (’04 U.S. Open, ’09 French) kept her cool, said nice boilerplate things in the post-match awards ceremony and may have saved the racket-flinging and anger for the locker room. In the second set, after getting her net cord gift to win the first set, she got up, 4-1, which was two service breaks. At deuce and 4-2 of that set, she was six points from winning the match. An hour later, she had lost it.

“I didn’t feel good today,” Kuznetsova said, “because she was so aggressive. I was a little bit out of my game. I played too far back. The only thing I could do is defense.

“I was too passive…I lost a match I should have won. But this is tennis. This is a game. Nobody died.”

Vesnina had a realistic view of what had happened. Despite her semifinal run at Wimbledon last year and the gold medal in doubles in Rio she shared with Ekaterina Makarova, her title here was on nobody’s radar, especially because she had lost in the first round of qualifying here last year.

“Nobody picks me here,” she said. “I wouldn’t have even picked me.”

She knew the danger she was in at a set and 4-1 down. But she had a plan. “I was just kind of trying to stay out there longer,” she said. “Trying not to just give it away.”

And then came the grand summary, or how and why it really happened like it did. “At the end,” Vesnina said, “I think Svetlana was afraid to lose, and that was the difference.”