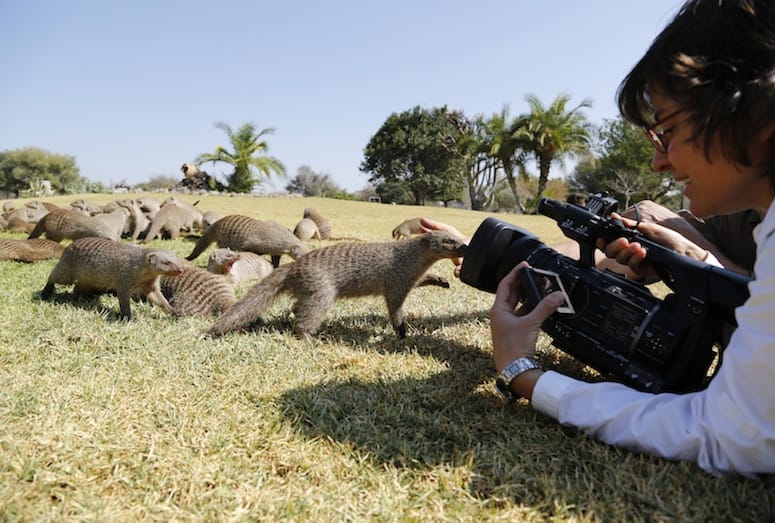 Visually stunning and deeply provocative, Sylvie Rokab’s documentary Love Thy Nature deftly challenges the age-old notion that we, as a species, enjoy full dominion over the Earth and its creatures to use (and abuse) for our comfort and pleasure. Through a rich kaleidoscope touching on science, technology, medicine, spirituality, and sustainability, the film explores our relationship with animals, ecosystems, and each other.

Employing testimony from a wide swath of experts, Rokab flips over every stone and gently focuses the lens inward, encouraging a self-view that we are nature, not her master. Seducing viewers with exceptional production quality, riveting cinematography, and narration by Liam Neeson as the character Sapiens (mankind), Rokab’s message is one of hope rather than blame. We can learn from the natural world and help the planet right itself, even amid the destruction fueled by global warming, factory farming, and other ills of the industrial age. The film will screen during the American Documentary Film Festival, March 26-30, in Palm Springs.

What was your inspiration for the film?
It came from childhood, really. My parents were nature lovers. As a kid, I spent weekends on gorgeous beaches and beautiful mountains with rivers and waterfalls and monkeys and parrots — all kinds of animals. Nature was the biggest playground, a source of joy, laughter, and comfort. As an adult, I fell in love with photography and later cinematography and started filming nature. I worked for PBS and the Travel Channel filming beautiful places, but there was this big hole that needed to be filled between gorgeous movies that were only about wildlife and nature and the hardcore environmental films that didn’t explore the beauty of our connection with nature. That’s why I felt that there needs to be a film how much we are just a part of this larger existence, and that nature is our source, our foundation, our mother — our everything. It’s the blood that runs through our veins.

The film illustrates how young we are as a species. What is the message behind the segment Earth in a Year?
If you condense the life of the planet into one year, you see that our civilization has only existed for one second of that year. It’s almost like we are children who don’t realize that if they play with fire, they may get burned. But we’re in this awakening phase where we’re starting to realize that this does burn. In terms of our civilization, I think we went too fast, too far, and we are at a place where either we have a huge awakening or we simply won’t make it. It’s a very stark realization, but there’s a biological revolution just waiting for us to dive into and take our civilization to a place we have never been before in terms of technology. And nature has four billion years of evolution to teach us how. How did you select the haunting music used in the film’s soundtrack?
In the industry, we often say, “sound is half the picture.” To me, music plays a crucial role in the emotional landscape of any film. I spent weeks searching for a great composer, researching and listening to a myriad of samples, but I had a hard time finding the right fit. A colleague introduced me to François-Paul Aïche, a French composer who lives in Boston. His music grabbed me. It was rich, diverse, emotional and powerful. François said the film had deep resonance in him, so we were elated to work together.

You handle difficult topics with great delicacy. What was the thought process behind putting the germ of awareness into viewers’ minds?
It was a very conscious decision, because I want people to feel sad during the factory-farming scene, but at the same time, I didn’t want to wrench their hearts so deeply that it would make them not want to see the film. You don’t need to see blood or violence; you just capture the souls in the eyes of those animals.

What were some of the challenges in making the film?
Allowing the process to happen in the way it’s supposed to happen. I would have wanted to make the film in three years instead of eight, so patience is a challenge at a personal level. At a group level, it was making sure we had funds to keep moving forward.

What have you learned?
One of the things I discovered was the depth at which we can learn from nature. How is it that an ecosystem functions so magnificently, even though you have species as small as ants or as big as elephants? They all have a role to play and they help each other. Imagine if we could apply this mindset to our political and economic systems?

What would you like viewers to walk away with after leaving the theater?
Let yourself be loved by nature. There’s nothing like the experience of letting nature into our lives. It can be totally transformative. Once we realize that nature is a part of us, we would want to destroy it as much as we would want to destroy our own children — it’s who we are.