Filmed in the Valley, "Take Back" Premieres at Mary Pickford Theaters 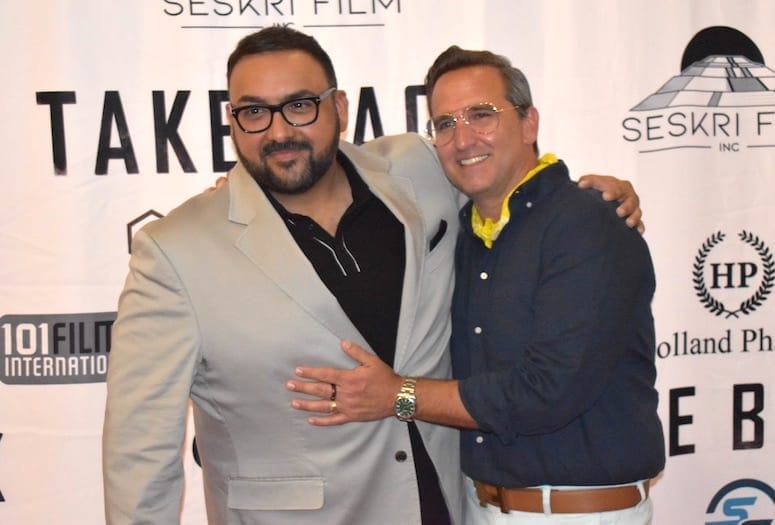 (From left) Director Christian Sesma of Cathedral City and producer Mike Hatton found a way to make the film, Take Back, during the pandeMic and shot in the Coachella Valley.
PHOTOGRAPHS BY JIM POWERS

At a time when the rest of Hollywood was standing down during the pandemic, producer Mike Hatton and director Christian Sesma combined to shoot three films, including Take Back, which premiered June 17 at the Mary Pickford Theaters in Cathedral City.

Take Back was also shot in the Coachella Valley and followed the duo’s initial film, Pay Dirt with Val Kilmer. The third film, Every Last One of the Them, will star Richard Drefyuss.

In Take Back, Zara (Gillian White) and Brian (Michael Jai White) are living a seemingly perfect life when a mysterious man (Mickey Rourke) from Zara's past kidnaps their teenage daughter. With the help of a small-town sheriff (Paul Russo), the couple races to save their daughter before she's sold and vanishes into the sex trade.

“The film sheds some light on human trafficking — a cause Michael and I are both passionate about fighting,” says Gillian White.

The premiere was followed by an after party open to the public at Agua Caliente Casino Cathedral City.

“This is an amazing night to give back to this area and our mostly local crew for all the work they made into making this film,” says Sesma. Adds Hatton, who once worked for NewsChannel 3 in the Coachella Valley before moving on to acting, “We truly couldn’t have done these films without the support of the community in the Coachella Valley.”