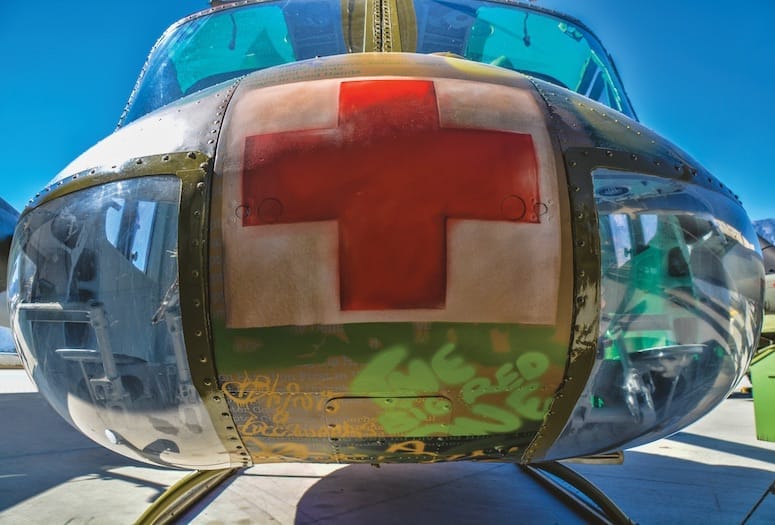 Steve Maloney puts discarded objects and scraps to use in his colorful and poignant artworks.
PHOTOGRAPH BY TOMMY ANDERSON

Editor’s note: Palm Springs Life was saddened to learn that Steve Maloney died on the evening of Feb. 23, as the March 2021 issue containing this story reached our readers.

Steve Maloney is a man with big ideas and the will and means to realize them. The artist, who splits his time between Palm Springs and Rancho Santa Fe, has spent the better part of the last five years transforming a boneyard Vietnam-era helicopter into a colorful sculpture and touring it around the United States as a traveling veterans memorial called Take Me Home Huey.

It’s also the nucleus of a multimedia project consisting of an Emmy Award-winning documentary directed and edited by Christine Steele and Alicia Brauns, a commissioned song by Jeanie Cunningham, an educational website, and a coffee table book out March 29, Vietnam Veterans Day.

“The mission of Take Me Home Huey,” Maloney says, “is to honor over 2.7 million Vietnam veterans who never got a welcome home and bring awareness to post-traumatic stress disorder and other mental health issues that many veterans face when they return home.”

The project traces to 2012, when President Barack Obama issued a proclamation establishing Vietnam Veterans Day. “I started thinking about that period of time,” says Maloney, the son of a World War II veteran and 21 years old in 1963 when he enlisted in the Michigan National Guard. “The Huey helicopter was an iconic symbol of the Vietnam War.”

“Huey” was the nickname for the UH-1H Model 205 Bell Iroquois helicopter. About 7,000 of them flew in Vietnam. 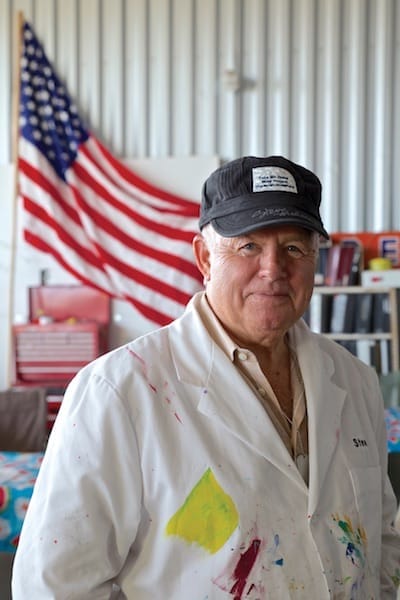 In 2015, the Arizona-based nonprofit Light Horse Legacy identified and acquired a hollowed-out Huey that had been shot down during a 1969 medical rescue for Maloney to resuscitate as an artwork. “This Huey transported the wounded,” Maloney says, “but it also transported soldiers into hell and out of hell and brought their mail and everything else to them. It was their lifeline.”

The organization’s founder, Dave Barron, used the tail number to research the history of their 47-foot-long helicopter and eventually reunite surviving soldiers and families connected to it.

Meanwhile, the process of transforming the aircraft into a sculpture was a trip in its own right. “It took a lot of thought and research — reading and seeing films about the Vietnam era,” he says, noting how he imagined the tail boom as a soldier’s arm, tattooed with “things he remembered from home — a girlfriend, a car, mom’s apple pie.

That was all part of the experience. It took a long time working through the process and being open about it.”

He exhibited Take Me Home Huey as a work in progress in a pop-up studio at the Palm Springs Air Museum. There, he says, “I could engage in conversation with various veterans. They could see the compositions and we could start talking.”

Inside the aircraft, Maloney suspended original gauges and instruments and installed a time capsule that contains photographs, letters, and items donated by veterans and their families who he met when he put the helicopter “back in service.”

When they unveiled the completed work in Peoria, Arizona, they also reunited the families of Gary Dubach and Stephen Schumacher, who died aboard this Huey in Vietnam, with pilot Walter McNees and door gunner Ralph Tutrani. The event marked the first stop on a tour of 29 venues around the country, including the New York Veterans Day Parade on Fifth Avenue. “That was an unbelievable experience,” Maloney says. “We had the crew with us, after 47 years, and Jeanie Cunningham, who composed and sang ‘Take Me Home Huey.’ 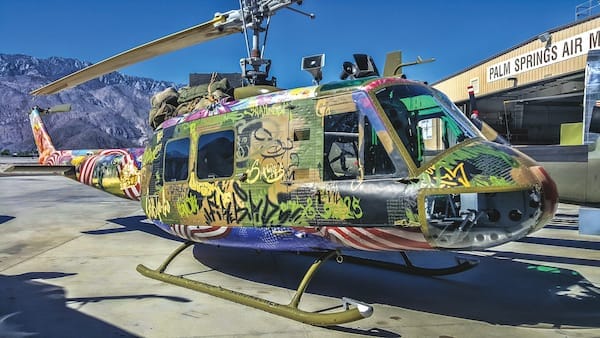 “Most art can’t be touched, but I encouraged them to touch it,” he continues. “This has been a healing helicopter. It touched the lives of veterans. It has given them a way to talk. And talk is good, especially because a lot of the vets suffer with PTSD.”

Maloney, who is chairman of Palm Springs Art Museum’s board of trustees, has been around art most of his life. Growing up in Kalamazoo, Michigan, his parents were artists: his mom a painter who also drew in charcoal, his father a potter.

“I can remember when he’d come home from work,” he says. “He’d rip off his Brooks Brothers suit and go to the potter’s wheel in his boxer shorts.” His grandmother was also a painter.

Maloney, who owned a men’s specialty retail shop and a machine tool manufacturing company in Kalamazoo, has been making art since he retired in the late 1980s. “Later in life, when I had an opportunity, I thought it would be great if I could get some coaching and lessons, and so I did,” he says. “The greatest part is it makes me feel good.” 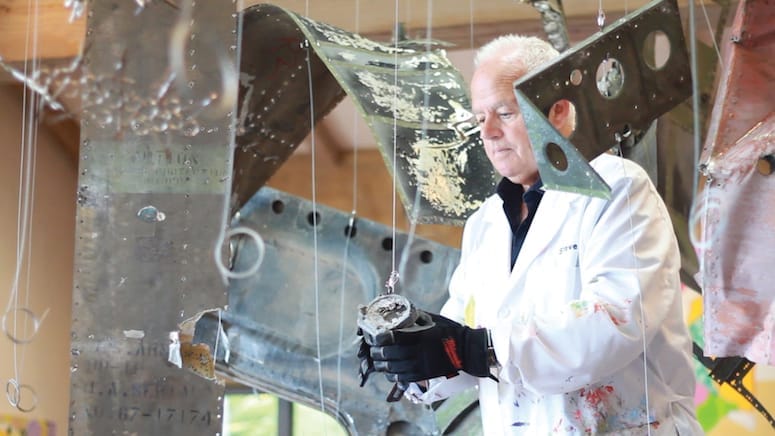 In 2006, Maloney told Palm Springs Life about a cocktail party he and his wife, Yvonne, hosted at their Smoke Tree Ranch home that changed the course of his life: “I decided to hang one of my paintings on the wall. I had started to build up a portfolio, and I was having fun. Hanging up the painting was saying, ‘Look at what I made.’ I liked what I did, as did some of the people who came to the party.”

His knack for giving new life to cultural detritus like the skeleton of the Huey runs through almost all of Maloney’s work. For his Banned Booty assemblages, he used items confiscated at six California airports after Sept. 11, 2001 — Swiss Army knives, cigarette lighters, scissors. “The challenge was to not make a statement about the tragedy,” Maloney says. “I wanted it to be about the people. What are these deer antlers doing in this bunch of booty? When the series was exhibited, people would engage with pieces and talk about their experiences.”

Another series, Where the Rubber Meets the Road, is an homage to NASCAR culture using car scraps sourced from racetracks such as hoods and side panels. It was also a nod to John Chamberlain, the artist who famously made sculptures from crushed automobile steel, but with Maloney’s own twist: “Mine is about today’s lifestyle in the sense there’s advertising on it,” he says, “There’s a message.”

He even made another sculpture using a helicopter fuselage: the whimsical, blinged-out Ride ’Em Copter, inspired by Glen Campbell’s song “Rhinestone Cowboy.”

Take Me Home Huey is nothing like Ride ’Em Copter. In 2019, after Huey completed its U.S. tour, Light Horse Legacy donated Maloney’s sculpture to the Palm Springs Air Museum, which hosts this month’s book launch.

• READ NEXT: "Wildlights" Bloom in the Spring at The Living Desert Zoo and Gardens.