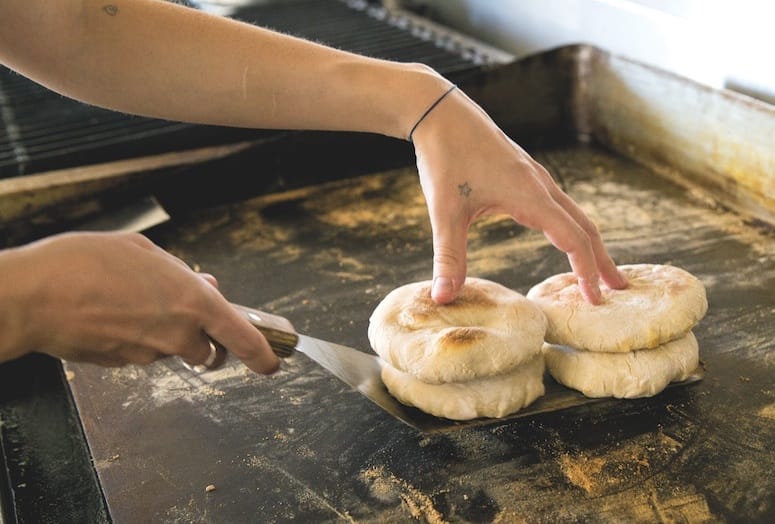 If you’ve never heard of Flamingo Heights, California, you’re in good company. Not so long ago, that company included Nikki Hill and Claire Wadsworth, the dynamic duo who opened the lauded restaurant La Copine last year. Today, the eatery, and the couple, are practically synonymous with the sparsely populated high desert Flamingo Heights community, which enthusiastically welcomed the new business well before the place served a single customer.

“We didn’t say ‘This is Yucca Valley,’ even though it is unincorporated Yucca Valley. We wanted everyone to know it’s Flamingo Heights,” Wadsworth says of getting the word out about La Copine after she and Hill bought the space on a whim in May 2015 and immediately started teasing the impending opening. “The first thing we did was the sign. Everyone drives past and there’s so much traffic, people going to Big Bear, Barstow, Vegas, people who live in Landers,” she says. “We wanted people to say, ‘What’s going on?’ ”

It worked. News spread about the collaboration between Wadsworth, a singer-songwriter and music teacher, and Hill, a trained chef who had helped open several restaurant kitchens in Philadelphia and, more recently, served as sous chef at Scopa Italian Roots near L.A.’s Venice Beach. When they began posting photos of the renovation progress on Instagram, they were rewarded with an unexpected social media boost from well-known painter Lily Stockman, a part-time Flamingo Heights resident with more than 100,000 followers on the app. “The minute I saw her liking our photos and commenting and tagging all of her friends, I’m like, ‘Oh Nikki, we’re going to be busy,’ ” recounts Wadsworth. 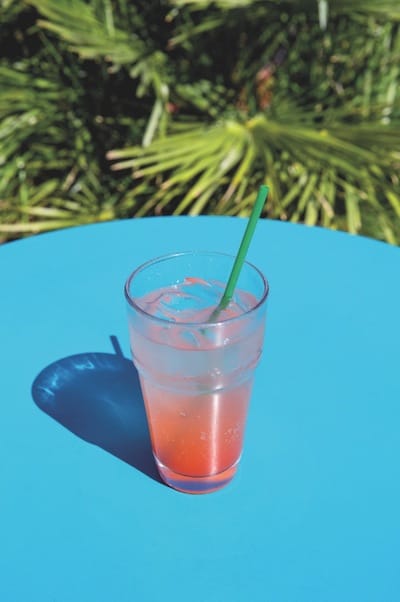 The duo piqued even more interest by emailing a preview of their brunchy menu, touting elegant dishes like house-cured Ora King salmon tartine on rye-baguette toast and the Royal Crumpet breakfast sandwich stacked with all-natural sausage, a fried egg, arugula, roasted tomatoes, and hollandaise on a housemade English muffin. When La Copine — which means “girlfriend” in French — opened in September 2015 with two owner/employees, Hill in the kitchen, and Wadsworth running front of the house (a job that included waitress, dishwasher, and “mopping at midnight”), the crowds descended.

The dusty stretch of Highway 247 known as Old Woman Springs Road that winds from Yucca Valley toward Barstow, seems an unusual choice for a place serving nuanced dishes composed of za’atar-spiced garbanzo beans, pickled strawberries, and coconut-orange anglaise. During the 9-mile ride north from Highway 62, drivers pass makeshift churches, automotive and roofing supply shops, and the occasional pizza place or dollar store. La Copine is a booming anomaly. Members of the (freakishly attractive) local artists’ community mingle in the morning over cinnamon-coffee sugar beignets and organic sweet potato-poblano pepper hash; visitors en route to or from Joshua Tree National Park stop in for a smoked free-range beef brisket sandwich finished with whiskey barbecue sauce and charred green onion. Some people drive from Palm Desert, or even Los Angeles, specifically for a meal at the airy 60-seat restaurant, which keeps sparse hours of 9 to 3 Thursday to Sunday, along with monthly supper club dinners. 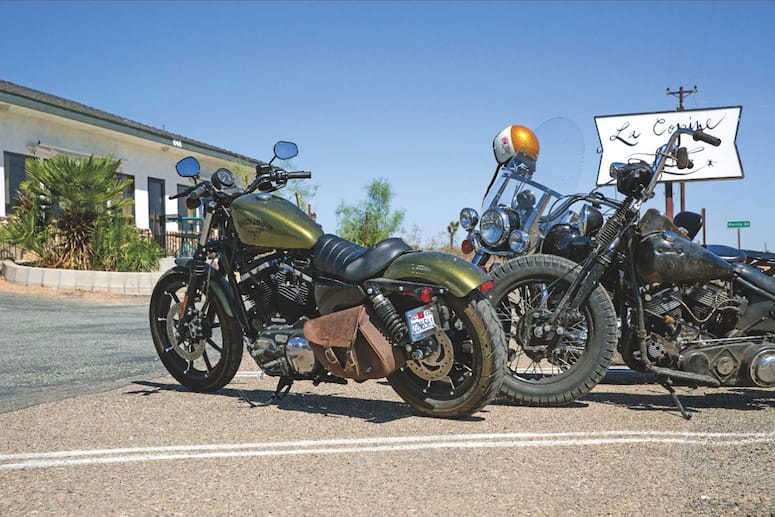 “Everything is made here with very minimal staff,” Hill says, “but we just feel like we’re actually giving people something that’s made with all of our integrity and energy….”

The last year and a half has been both a whirlwind and a surprise for the couple, who met at a dinner party in Philadelphia in 2009. They entered into their first culinary venture together the following year with a weekend brunch food cart, later making the cross-country move to Los Angeles, where Hill had stints in a few high-profile restaurants, Wadsworth taught music, and they started a small catering company on the side, often doing dinner parties for the Hollywood set. Although they had dreams of opening a restaurant there, they were discouraged by the astronomical cost. 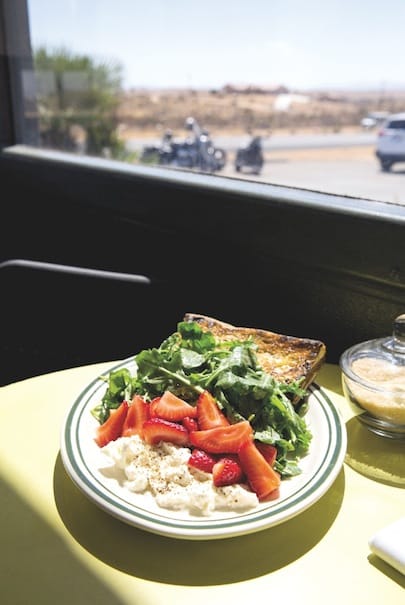 Prince would have loved the Strawberry Beret, with burrata cheese, arugula, and rye toast.

Their brief honeymoon to Joshua Tree following their spring wedding in 2015 changed the course of their future. While visiting Integratron, the high desert sound bath installation, one of its owners told them about a nearby restaurant for sale. The couple drove by and saw the posted cardboard sign touting a turnkey restaurant for $39,000. “It looked abandoned,” Wadsworth says of the space that formerly housed a barbecue takeout and catering outfit. That night, Hill and Wadsworth spent a perfect evening at Pappy & Harriet’s, Pioneertown’s Americana music palace, and realized they could rent a house nearby for half of what they paid for their one-bedroom apartment in L.A.

Hill and Wadsworth scheduled a walk-through of the property and learned that the price had dropped. “The place was literally caked in grease,” according to Wadsworth. “There were Wal-Mart folding tables, the walls were lavender and mint green, there were soda machines on all the counters.” 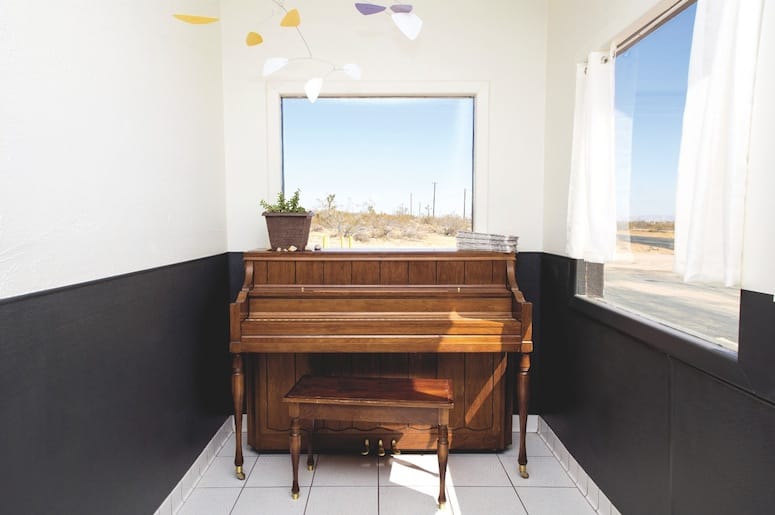 The music room’s piano has a fabulous view.

A week later they handed over the cash to the owner, who offered some advice: “ ‘If I were you, I’d get myself a shotgun,’ ” Wadsworth recalls. “And then he gets in his truck and pulls away, …”

A big challenge was finding vendors to deliver what they wanted: seasonal, sustainable, all-natural, organic products. “Nikki literally had to beg people: We’ll give you 50 bucks every delivery, just please come up the road.” Now La Copine serves mostly California produce, ethically-raised meats, and — except for breads from Aspen Mills in Palm Springs — makes nearly all of it in-house, curing the salmon, grinding the sausage, and crafting everything from chipotle ketchup to strawberry-and-lavender soda. 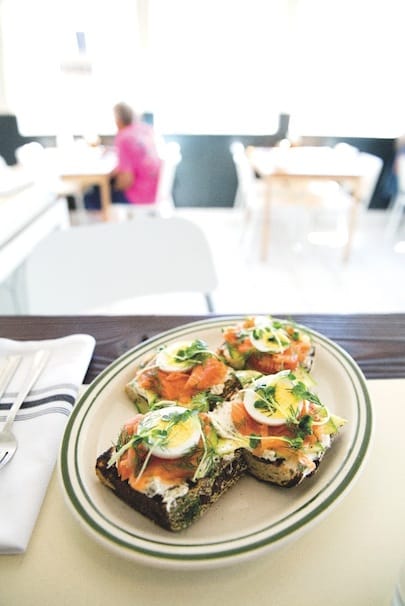 The couple say that although most of the feedback has been positive, there are still some area residents who aren’t thrilled or impressed with the fare.
Although La Copine has created some converts, you can’t please everybody. “At a certain point there are people who won’t be happy. They want Diet Coke, they want $4.99 Grand Slam breakfast,” Hill says. “But overwhelmingly, people want to hug us. It feels really special.”

Wadsworth, too, can’t believe how La Copine has become such a welcomed piece of the community in such a short time. “We have everyone from local textile designers to the same military families who come in every weekend with their kids. You look around at when the whole restaurant is full and I could cry at how incredible it is.”