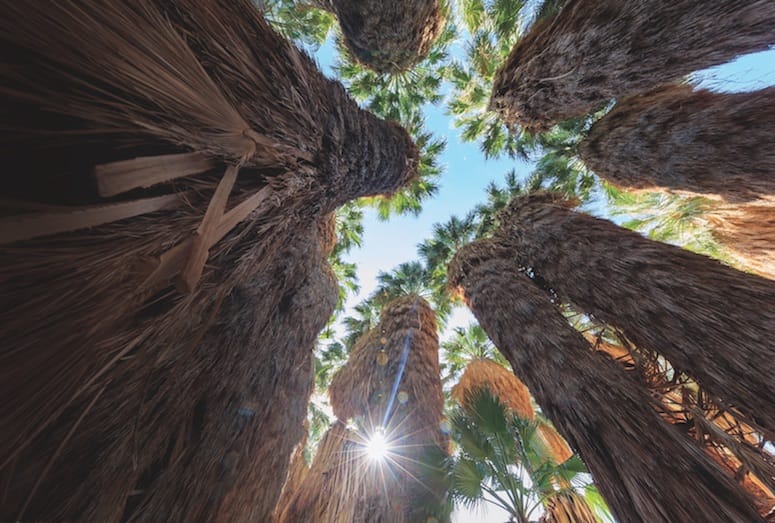 WALK THIS WAY
Coachella Valley Preserve, Thousand Palms
When you have a desert, you have an oasis. Use it. The McCallum Trail, one of several in this lovely wilderness region, leads to the majestic McCallum Grove, a fan palm oasis, for which you have the crashing together of tectonic plates to thank. In the midst of arid desert sands, this lush grove teems with flora, fauna, and birdsong, routinely brushed by breezes.

After crossing a sandy wash that straddles the San Andreas Fault, the trail descends to the cooler floor of the oasis. The sumptuous palm fronds afford shade and transpire water, imparting 10- to 15-degree cooler air and a bit of humidity.

More significant, human blood pressure also falls … and moods elevate. Nature’s restorative benefits might be the legacy of our hunter-gatherer past suggests Janet Hartin, an environmental horticulture adviser with the UC Cooperative Extension in San Bernardino. “When our ancestors found food,” she theorizes, “they were rewarded with a nice gushing dose of dopamine released in the reward center of the brain, resulting in euphoria.”

Exercise such as walking can trigger neuro-chemical benefits with minimal mental or physical strain. Indeed, the moderate McCallum Trail gently leads visitors to a natural sanctuary where anxiety wrought by the urban world evaporates in the desert air.

Admission is free. For a modest donation, trail maps are distributed at the Palm House visitors center.

PHOTO COURTESY OF INTEGRATRON
Landers is known for earthquakes and the more desirable vibrations at the Integratron.

MAGNETIC ATTRACTION
The Integratron, Landers
Don’t rely on Garmin or WAZE to find the Integratron, a modernist dome tucked away in a lost corner of the Mojave Desert. It sits on a magnetic field that can fluster those GPS devices. Those forces, however, supposedly infuse the structure with its signature therapeutic vibration. Built in the 1950s as a time-travel machine by engineer George Van Tassel (at the behest of visitors from Venus), the Integratron is stewarded by three sisters: Nancy, Joanne, and Patty Karl. They run the dome as an “out-of-this-world” healing center and tourist destination.

Visitors come to be revitalized by the site’s good vibrations — not just magnetic, but also sonic. Van Tassel’s vaulting dome, fashioned with only Douglas fir and caulk, amplifies sound so faithfully it’s been called a “resonant tabernacle.”

Guests lie on mats under the dome, caressed by varying sound frequencies. The tones emanate from two singing bowls, their rims stroked in unison by Nancy and Joanne. The cascading waves of music and magnetism are thought to relieve stress by composing inner harmonies and heightening awareness. The frequencies also enable experienced meditators to easily achieve a theta brain rhythm.

As for Van Tassel’s promise of time travel, per the website’s suggestion, think of the floor mat as your transportation back to kindergarten nap time.

PAINT IT BACK
The Well Spa at Miramonte Resort & Spa, Indian Wells
Indian Wells derives its name from three wells that once quenched parched thirsts and revived weary spirits. One sits in the heart of the spa dedicated, like all of them, to relaxation and rejuvenation. But this one offers one proprietary treatment designed to revive relationships. It’s called “Pittura Festa,” Italian for “Painting Party.” The premise is playful, and the result is usually euphoria.

Couples paint on a unique canvas … their partner’s body. Their medium is mud.
Within a private indoor/outdoor suite, participants use brushes to apply a colorful palette of therapeutic muds: Green Sea to moisturize, Red Mountain to oxidize and detoxify, Desert Gold for protection, and Activated Charcoal to absorb impurities. We like to think of it as dirty dancing couples therapy.

Some mud compounds are renowned for their curative powers; ditto laughter. Combine them for a powerfully physical and emotion healing. Nurturing a relationship is a form of art; so is painting a body.

When the masterpieces are complete, wash them away in the warm outdoor shower before massage therapists finish the duet.
“We often see two people come in, barely looking at each other,” says Spa Director Stephanie Granik. “They leave holding hands … and giggling.”

SWEET SWEAT
Joshua Tree Retreat Center, Joshua Tree
Forty miles northeast of vibrant Palm Springs, the clear night sky above Joshua Tree shimmers with stars in a silence so deep, “it awakens you,” says Victoria GeVoian, executive director of the retreat. Her vast, spiritual getaway, reputedly the largest in the West, is laced with mystical streams, labyrinths, and meditation trails that wind among structures and sanctuaries designed by Frank Lloyd Wright and his son, Lloyd.

The sacred grounds are also home to a Native American sweat lodge, woven from willow saplings, where ancient purification ceremonies cleanse body and mind. Performed in the fall, during the winter equinox and in the spring, the spiritual ceremonies are open to anyone, but are necessarily private. “What is sacred must be secret,” cautions David Warren Goodknife, who guides the meditation during the Lakota-based ritual.

As many as 30 men and women sit inside the dark hut, circled around a hot lava rock pit. Water is poured over the stones to create steam and promote perspiration. Sweat is believed to detoxify the lymph system as special aromas circulate. A rush of endorphins helps focus the mind and balance the senses. Stress and distress diminish. It’s a metaphysical sauna, a simple rite as old as humanity, and one that promises profound results. “You are into you,” says Goodknife.

STRIP TO THE BASICS
Living Waters Spa, Desert Hot Springs
Undress to unwind. Nothing comes between guests and their rejuvenation including clothing. If you think being in the buff would create instead of relieve anxiety, think again. “Within minutes you no longer care about how you look. You accept yourself and everyone else,” says co-host Judy Bowman. She experimented with public nudity after undergoing a mastectomy and found that it dramatically improved her body image and self-assurance.

“The man next to you might be a neurosurgeon, but he’s naked, just like you,” says her husband, Jeff, a former pastor. “It’s exhilarating.” And, according to some studies, a healthful practice. Sunlight helps your body absorb vitamin D, stimulates the production of serotonin, and is thought to confer a sense of well-being (provided that you apply sunscreen after a sufficiently salubrious exposure without).

Before the Bowmans bought the property, it housed Kismet, a midcentury motel whose vintage neon sign still brightens the night. There are only nine rooms, but condo apartments are available for extended stays and day passes for short ones.

SENSORY DEPRIVATION
Desert Serenity Float, Palm Desert
Easing into a floatation tank is how we would imagine it feels to return to the womb. A warm saline bath suspends your body inside a pitch-black, silent chamber. The only sound is your heartbeat. “The first time I tried it, I felt like I was a brain floating in a jar,” gushes Lynse Gardner, a local event planner. “Within a half hour, I reached a state that took me three years of meditation to achieve.”

This holistic therapy was all the rage in the altered states frenzy of the 1970s, and is enjoying a 21st century renaissance. (Desert Serenity Float opened in March as the valley’s first float center.) Devotees claim sensory deprivation has the opposite effect in the longer term, activating the senses, heightening creativity, sharpening perceptual skills, and alleviating ailments from chronic pain to depression.

An immaculate interior greets Serenity’s guests, who are asked to shower before and after every session. “We triple filter the pod water in minutes, so it’s virtually germ-free,” says Mike Reiter, who built and runs Serenity. He claims the hundreds of pounds of Epsom salts dissolved in 10 inches of water not only promote buoyancy, but boost vital blood magnesium levels.
Reiter plans to open another float operation in Palm Springs.