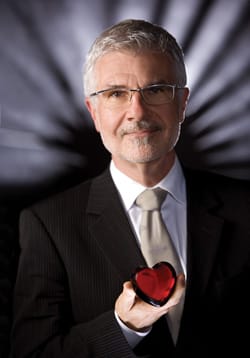 Six and a half years ago, a 48-year-old man diagnosed with an inoperable blood disease sought help from an internationally renowned surgeon.

Dr. Steven Gundry, a thoracic surgeon, recalls that he looked at the man’s angiogram and told him, “I don’t turn down a lot of people, but I just don’t see that I can help you.”  The man told Gundry that after the angiogram revealed his blood vessels were almost completely blocked, he went to a health-food store and loaded up on nutritional supplements. He requested a new angiogram. “In six months, he had cleaned out half the blockages in his blood vessels,” says Gundry, who claims that seminal moment changed his ideas about his own health.

Plagued by prediabetes, hypertension, arthritis, and high cholesterol, Gundry dug out a diet he had designed while specializing in human evolutionary biology at Yale University and started taking nutritional supplements. Now some 70 pounds lighter, he uses his experience to guide others as medical director of the International Heart and Lung Institute Center for Restorative Medicine.

“Restorative medicine has re-energized my entire faith in people and the power of the human body to heal,” he says. “Not a day goes by that I am not absolutely flabbergasted by the changes that people can make in their bodies, in the blood vessels, by making a few simple changes in what goes through their mouth.”

Desert Regional Medical Center in Palm Springs recruited Gundry in 2002 to establish a heart institute at the hospital, where he still performs cardiac surgery two days a week. Four years ago, he and Walter Ehrman, a professor at Loma Linda University School of Medicine, founded their own heart and lung institute across the street from Desert Regional.

“We have had so many patients who have had success in reversing heart diseases, diabetes, cholesterol, and hypertension,” Gundry says. “We have developed a diet program, and we make use of a lot of nutritional supplements, vitamins, herbs, and minerals. By doing that, we have people reduce their bad cholesterol levels and get people off their statin drugs. … We not only do the cardiac surgery, but afterward we teach people how to avoid us in the future.”

Gundry decided on the medical profession at the age of 10 after reading a book from the school library about the human body. He chose to specialize in cardiac surgery as a freshman at Georgia School of Medicine when a pediatric cardiologist mentored him. “At the end of the year, I said, ‘This is all wonderful, but aren’t you frustrated that you can’t fix them?’” The doctor indicated he was satisfied being able to diagnose heart problems. “I said, ‘That’s probably where you and I will cross paths, because I want to fix them, too.’”

Now Gundry calls his specialty “restorative medicine” and expects a lot of media attention (perhaps even an interview on Oprah) when Random House releases Dr. Gundry’s Diet Evolution on Jan. 1, 2008.

The doctor counts his greatest accomplishment as “getting a chance to see the light bulb going off in someone’s head when they realize that they can take control over their health. It’s even better than fixing somebody’s heart.”