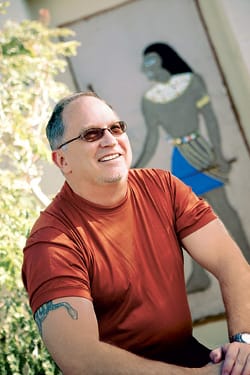 Brad Geagley has been reading laundry lists — the kind that includes underwear — from translations of ancient Egyptian documents.

“There is a new thrust in historical research,” he says. “Instead of looking at kings and queens, they’re looking at how you and I lived in those days.”

Geagley is already an expert in the lives of the pharaohs. In fact, his two books set in 1150 B.C. — Year of the Hyenas and Day of the False King — have been dubbed “pharaohnic noir,” his protagonist the “Sam Spade of ancient Egypt.”

Growing up in La Mirada, Geagley became intrigued in the distant time and place after reading Mika Waltari’s The Egyptian when he was in the fifth grade.

“If I were of that persuasion, I would say it’s past-life recognition,” he says. “It seemed very familiar to me.” Or, he suggests, maybe it was because the first movie his parents took him to see at the drive-in was 1955’s Land of the Pharaohs.

Combined, those events launched Geagley into a life of research and ultimately writing. He is now working on a book about Cleopatra that he began in the eighth grade — before, he says, “life got in the way.”

“Life” includes a career that began with a job making medical films at St. Joseph Hospital of Orange, where he became friends with the nuns who own the hospital.

“They had six living mother superiors and wanted to chronicle their history,” Geagley says. They sent him to France, Italy, and all around the United States to conduct interviews. After that, he designed a virtual tour for IBM that digitizes manuscripts in the Vatican library and then spent 12 years working for The Walt Disney Co. His first project at Disney was overseeing construction of a 1930s-styled studio in Florida, which allowed him another opportunity to indulge in his interest in historical research. He holds four patents for virtual games and has worked as a consultant on exhibitions, including the mechanical Rhino Experience at Los Angeles Zoo in San Diego and Gorilla Encounter at San Diego Wild Animal Park. Now he consults for a new World War II aviation museum in Seattle.

It was during weekly flights between Los Angeles and New Jersey to visit a vendor for the DisneyQuest virtual reality theme park in Florida that Geagley began writing Year of the Hyenas.

“It was my private kingdom. At Disney, I was surrounded by so much talent, and it’s all so collaborative. No one knew who had an idea first; you don’t have any kind of ownership of anything,” Geagley says. “The writing was mine.”

In fact, the Palm Springs author sports a tattoo of a snake that he calls “protection against the mouse.” It also reflects his belief that people should occasionally shed their skin and become someone new. “Boredom is my enemy,” he says.

Geagley had only an outline and 100 pages written when his real estate attorney, who had worked in arts and literature on Broadway, asked if she could show it around. She lived in the same building as the secretary to Michael Korda (then editor-in-chief of Simon & Schuster) and handed the manuscript-in-the-making to her in the laundry room. “Within two weeks, I had a deal — not for one book, but for two and the option on a third,” Geagley says.

When he visited Egypt in 1977, he had not yet conceived of writing a novel. “But it was an invaluable resource for me, because I don’t think you can describe the sunrise over the Valley of the Kings until you have been there,” he says, noting in particular the way the sky gradually lightened with the rising of the sun and the ubiquitous smell of fried onions. He relied on book research for historical accuracy. When he writes that there are 17 steps into the pharaoh’s tomb, there are 17 steps into the pharaoh’s tomb.

People who lived in ancient Egypt populate his writing (Semerket being the only fictional character), and many plot elements were actual occurrences — not the least of which is The Harem Conspiracy that resulted in the death of Ramses III.

When he began Year of the Hyenas, Geagley was prepared more for the historical aspects than fictional ones. “I had never read that much mystery,” he says. “I read more mystery in preparation for this work than I did historical books, because history was a lifetime passion, but how mysteries were put together — from classics to modern — that was the true education.”

He outlined the Semerket series as seven books that he will eventually complete. Meanwhile, he’s writing a historical novel about Cleopatra, titled Alexandrian, and has almost finished a thriller set in 1950s Hollywood titled Double Exposure.

Geagley, who considers anything beyond 10 years to be historical, finds writing a novel set in the 1950s more difficult than a novel set in 1150 B.C. “Ancient times, you are creating a mask; it’s your interpretation of things,” he says. “But the 1950s were the 1950s, and people remember.”

As much as he likes reading historical documents (including laundry lists), Geagley has no interest in writing a purely historical book.

“Nonfiction history never talks about motives and emotions,” he says. “That’s why I write fiction. I love writing the drama of things.

“I believe humans have not changed since they became civilized,” he continues. “It may be 4,000 years later, but nothing much has changed under the sun as far as human emotions go.”

The film that changed Brad Geagley — or at least turned him into an expert on Cleopatra — was Joseph Mankiewicz’s 1963 film starring Elizabeth Taylor in the title role. In fact, Geagley learned so much about the Egyptian ruler that he was asked to participate as what he himself calls “a talking head” in Ken Burns’ two-hour AMC documentary The Film That Changed Hollywood. (Mankiewicz, incidentally, was Geagley’s mentor at USC film school.)

On Feb. 26, Geagley will speak at a Fashion Group International fundraiser about Cleopatra, and the movie in which Elizabeth Taylor had 65 costume changes. (Information: 800-758-4633)

“[Cleopatra] is a character that every generation has to re-examine. Every generation gives her a new mask,” he says. “She is a sexual individual, and she owns the richest kingdom in the world. She is a free woman in a man’s world — ultimately destroyed by it.”

With the writing of Alexandrian, Geagley is putting his own mask on the woman who has held his fascination since Cleopatra premiered.

“Historical fiction has become extremely hot again,” he says, “particularly if you have a mad woman on the cover.”