Talking Turkey: Thanksgiving by the Numbers 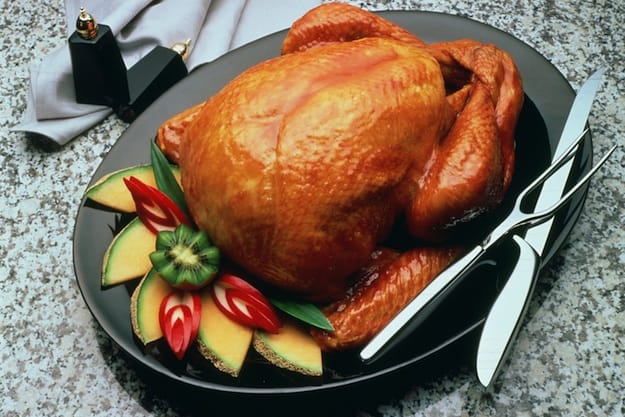 Listen turkey, do we some factoids for you about Thanksgiving.

Before you sit down on Nov. 22 and give thanks, think about how the same scene is being repeated around the country and what it took to make that happen.

254 million
The number of turkeys expected to be raised in 2012. An increase of 2 percent over last year. Don't worry. We still outnumber them. The U.S. population exceeds 300 million.

114.7 million
The number of U.S. households where people could be celebrating Thursday. Pick one and ring the doorbell.

768 million
The forecast for cranberry production in 2012. Wisconsin, normally associated with cheese, leads with 450 million pounds.

2.7 billion
The number of pounds of sweet potatoes produced in 2011. North Carolina, which went from a blue to a red state in this past election, should probably be colored orange. The state produces 1.3 billion pounds.

1.1 billion
The number represents the total product of pumpkins in 2011. The weather impacted this year's crop, so the record for the largest pumpkin pie ever made in 2005 (2,020 pounds) was not tested.

672,370 tons
What Thanksgiving is complete without green bean casserole. The number is the 2012 contracted production of green beans in the U.S. Wisconsin again leads all states with 309,010 tons.  Sorry, they are still Cheeseheads.

1
The number to use when figuring how big of a turkey to buy. One pound per person. Don't you love those people who buy an 18-pound turkey for 4 people?

0
The amount of turkey you should feed your dog. Even though we may think turkey is healthy, it may not agree with your pet's stomach especially in older dogs. Better than cleaning the carpet.

Sources for the numbers came from the U.S Census Bureau, the U.S. Department of Agriculture and the Animal Behavior College.