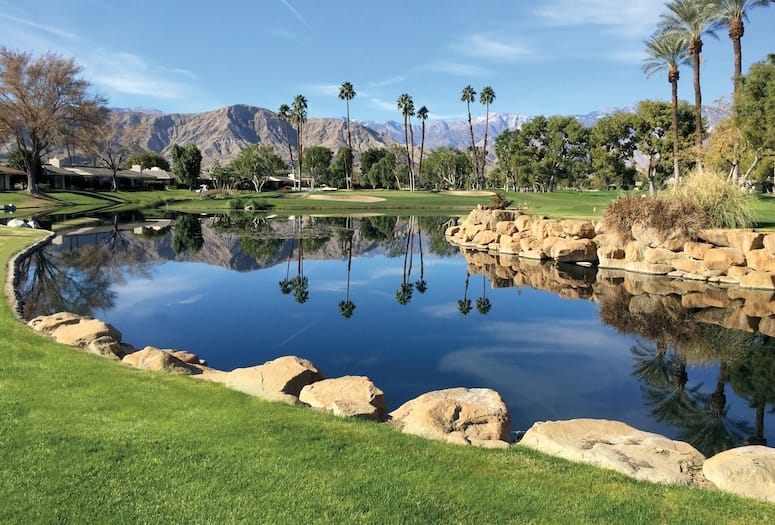 g>What are your favorite golf holes in Rancho Mirage? This is Doug Hart's at The Springs Country Club.
PHOTOGRAPH COURTESY THE SPRINGS COUNTRY CLUB

Editor’s Note: This story was written in 2017. Some of the people quoted in the story may have moved on to other positions since then. Thank you.

Host to two Ryder Cups and home to golf’s first major championship of the season, Rancho Mirage isn’t simply a Coachella Valley golf oasis — the city is a nexus of the game’s history.

While Rancho Mirage annually makes headlines across the globe when the victor leaps into Poppie’s Pond at the ANA Inspiration, the city’s golf scene is defined by far more than a single moment. Rather, amid its bounty of beatific plays, Rancho Mirage sports a celebrated host of public and private venues that regularly test the full spectrum of players.

To further detail these signature tests, staff members from nine Rancho Mirage clubs share what they believe are the legacy holes on each of their respective grounds.

1. Doug Hart,  Director of Golf at The Springs Country Club

“Our par-3 No. 12 plays over water, is surrounded by bunkers, and is 170 yards from the back tees. The putting surface has some nice undulations, which makes for a great putting test, especially with a back right pin placement, which adds about a half-club in length. And the 12th has a beautiful mountain background; when the mountains are snow-capped in the winter, it makes for a great photo.” 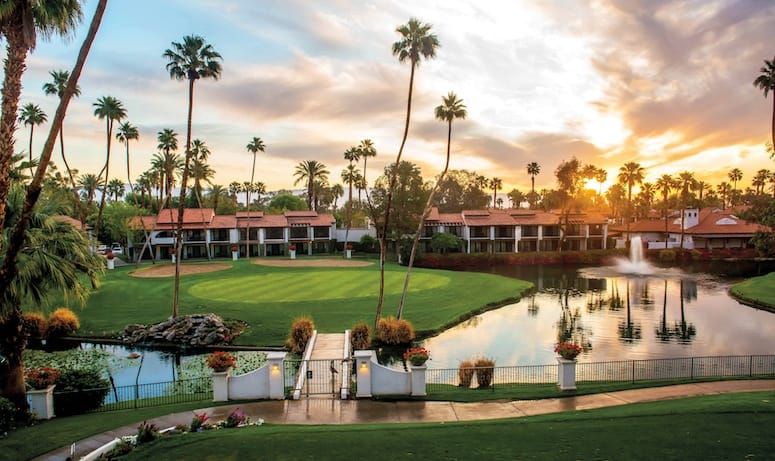 “The par-4 fifth hole on our West Course is pure risk-reward. Playing at just 284 yards from the tips, there’s water in the deep fairway and surrounding the green, so while some players are tempted to go for it, most will hit a mid-iron and play to about a 100-yard range for a great birdie chance. And with the hole winding through the heart of the resort and pools, it’s a great opportunity to show your wedge skills to guests enjoying the day.” 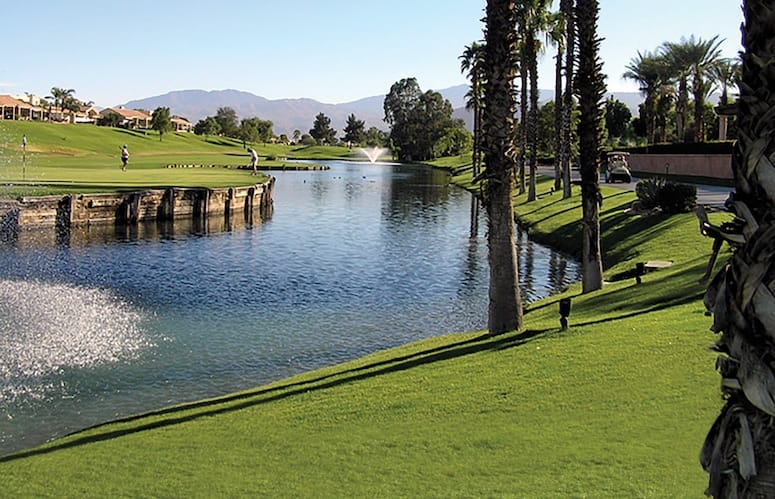 “The finishing 18th at our Pete Dye Resort course is an iconic golf hole in the desert. The 385-yard hole is one that may not challenge your length off the tee but puts a premium on accuracy. Pete Dye’s traditional railroad tie–lined lake begins just past the tee box and runs down the entire left side of the hole, making it very intimidating from the start. The right side of the fairway and greenside are both heavily guarded by deep sand and grass bunkers. This daunting test is one players are sure to remember as one of the best finishing holes in golf.” 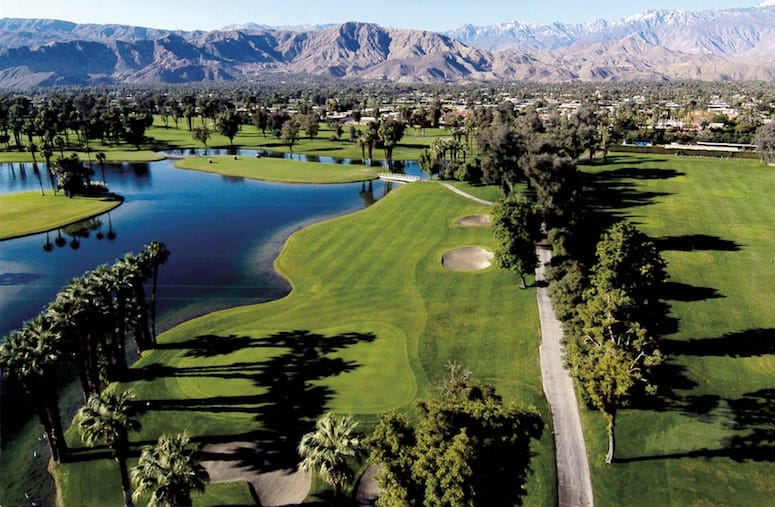 “Our No. 9 isn’t a long hole at 377 yards from the standard men’s white tee, but don’t let that fool you. The challenge starts right from the tee shot where the target is an island fairway. While the island is a generous area, the surrounding water has a way of narrowing one’s perception.
“One must decide whether to drive the ball as far as possible to the end of the island, or safely hit to the island with an iron or hybrid. Once on the island, you can’t let your guard down, as water lines the entire right side of the fairway and green. And just when you think you are home free, there is a challenging two-tier green!” 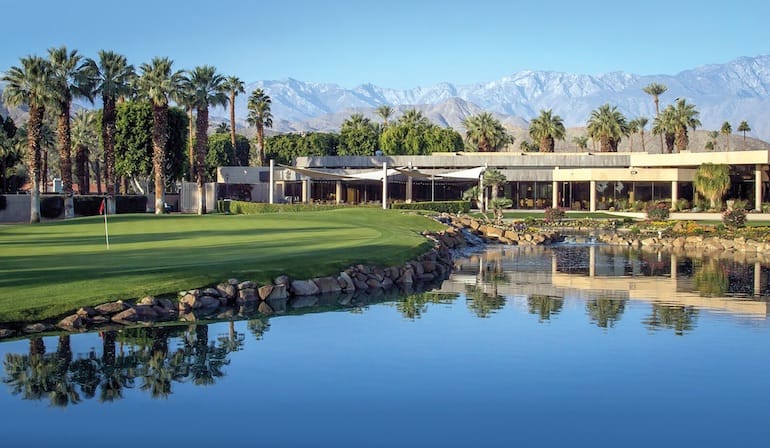 “Our 18th hole is a par 5, and the tee box backs right up to the old Frank Sinatra estate — so there’s historical significance. It plays as a three-shot hole for most players, though the real long guys can reach it in two. There are well-placed fairway bunkers that will catch drives a little bit too far left, and then a pond before the green, which separates the green from the first tee, and that’s definitely in play for approaches. Our new clubhouse renovation and new outdoor patio that is being constructed much closer to the 18th green will make for a very cool area to finish the round.” 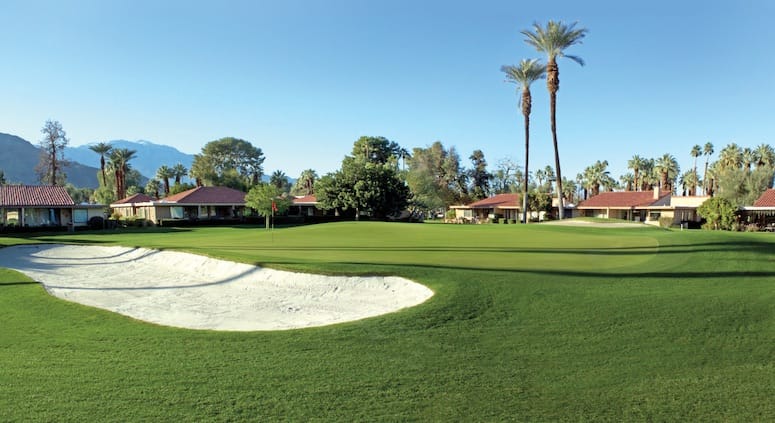 “Our signature hole is the par-4 fourth, playing at 305 yards, which challenges any level of golfer from tee to green. This dogleg left is guarded by two big pine trees at the corner to protect those who want to try to drive the green. Two fairway bunkers also on the left protect those aggressive players. For the bigger hitters, a straight drive through the fairway may end up in tree trouble or, even worse, out of bounds.
“Once finding the fairway, the second shot is all carry to a small green that is protected by Jaws, a nickname given out by members for a huge greenside bunker that extends the whole length of the front of the putting green.” 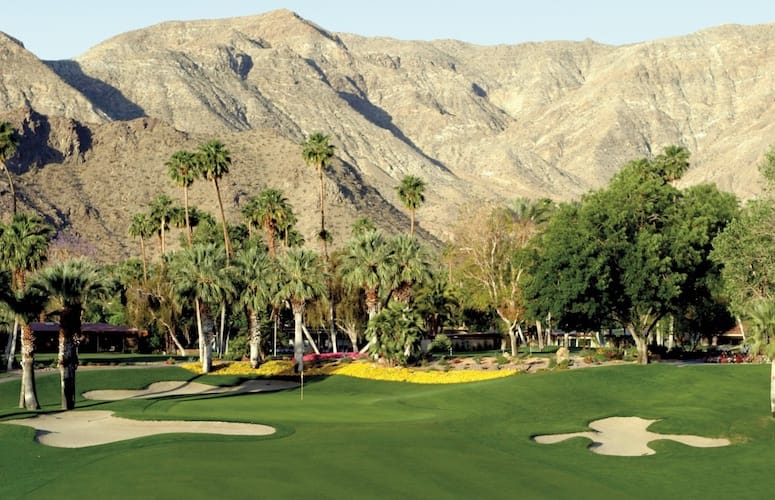 “The final hole at Thunderbird is a par 4, located 430 yards from the Ryder Cup tees. The tee shot demands length and accuracy to set up a mid-iron approach to a double-tiered green. A narrow shoot of Washingtonia filifera palms must be navigated on the tee shot to reach the ideal landing area. Once the tee shot is in play, the player’s second shot is played across a washway to the green, well-guarded by a front left bunker and large bunker in the back. The beauty of the approach, with the native desert landscape and Santa Rosa Mountains in the background, can be quite a distraction to the golfer as he completes his round.” 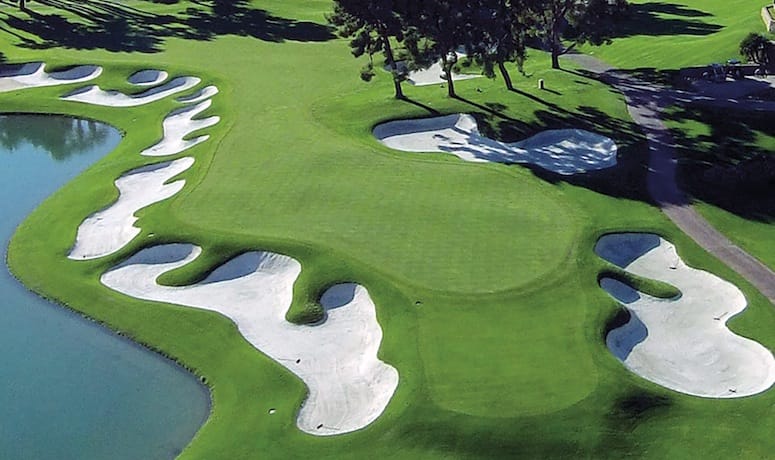 PHOTO COURTESY OF THE CLUB AT MORNINGSIDE

8. Joey Glander , Head Golf Professional at The Club at Morningside

“I would go with the par-3 12th. With Morningside being Mr. Nicklaus’ first signature course in California, the visuals that he creates — with the pond, the panoramic views of the clubhouse and snow-capped mountains — it just doesn’t get any better. The hole is about 196 yards from the tips; has the classic, Nicklaus deep bunkers with high faces; and plays to a combination green, one of two we have here, which is unique.” 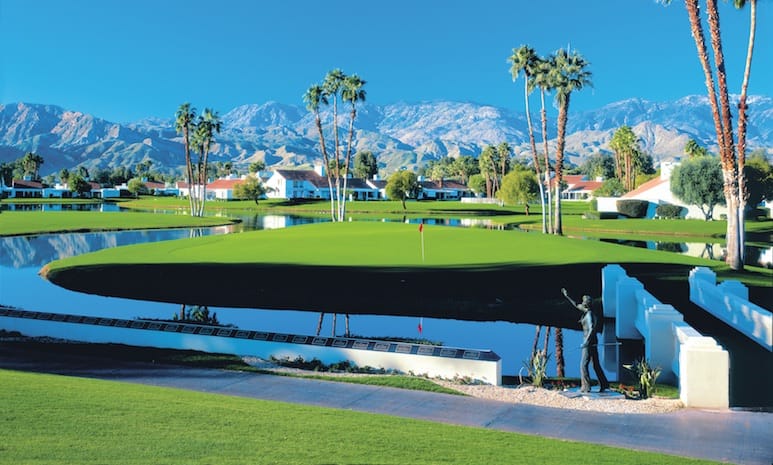 “If I were to pick just one hole at Mission Hills Country Club, it would be the par-5 18th on the Dinah Shore Tournament Course, due to its iconic nature to the ANA Inspiration and 45 years of Championship women’s golf. A great par 5 with an island green. Not only is it a great finishing hole in its own right but a hole with risk-reward and island green and equal chance for birdie or bogey … maybe even an eagle as a reward for two great shots into the putting surface.
“For the amateur player, the hole also features prominently in the Club’s championships for both women and men.”