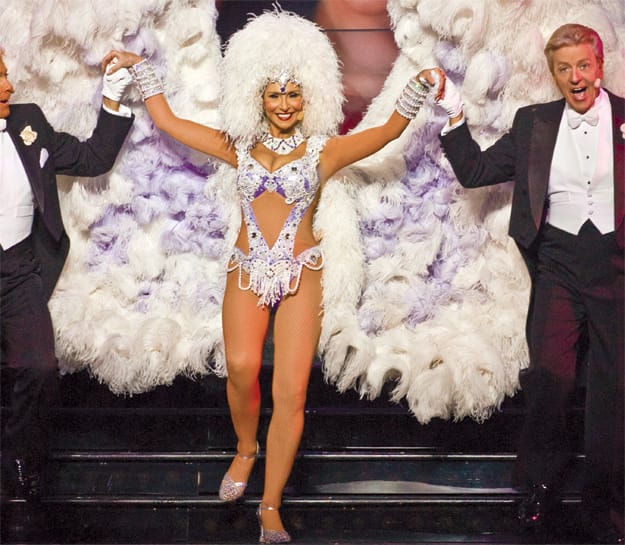 When Suzanne Vitale met with two probation officers from Riverside, she revealed a few secrets. Nothing nefarious, mind you — unless you consider the “enhancement” of tap dancing in The Fabulous Palm Springs Follies a criminal act.

“We spend a week or more singing and tapping for recording,” said the four-year cast member, explaining that, although they are wearing tap shoes on stage, the sound would fall short of reaching the theater’s back rows. Of course, that means the dancers can’t miss a beat. When she had to fill in for a male cast member in a solo number, Vitale had to match his recording tap for tap.

The probation officers, Phil Blende and Dee Sanchez, were privy to Vitale’s insider tales because they were among audience members who followed a matinee performance with Dinner With the Cast — a show-and-dinner package introduced near the end of the Follies’ last season and designed to give audiences an immersive experience.

“It’s interesting for us, too,” Vitale said. “We shake hands [with audience members as they leave the theater], but we have to keep them moving, so we really don’t get to say too much to people.”

Blende has attended the Follies for 18 years.

“I always enjoy the show and the talent,” he said. “Certainly the ladies and gentlemen of the Follies have done something they’re internationally known for, and I am very proud of them. They represent my generation.”

Blende also appreciates the patriotic numbers in the production and the salute to those in the audience who have served the country.

“The first time I was acknowledged for my service in Vietnam was at the Follies,” he told Vitale. An autograph collector, Blende came prepared with a pen and a Sony Handycam. Sanchez, who has attended the Follies for three years, said she and Blende always have a post-Follies dinner in town before driving back to Riverside. “We thought, ‘We’re going to eat anyway, so we might as well make it special.’”

Follies co-founders Riff Markowitz and Mary Jardin dropped by the dinner and answered questions. Markowitz, who has emceed every show since opening day in October 1990, maintained his glib, tongue-in-cheek persona.

Guest: “How often do you change the show?”

Markowitz: “Every day, because we don’t remember what the hell we’re doing.”

Guest: “When do you hold auditions?”

Markowitz: “Whenever I get lonely.”

The guests did get straight answers though: The most time allowed for costume changes is two minutes five seconds — and sometimes only one-and-a-half minutes. Auditions start in May, writing for the following season in June, and rehearsals in August.

But Markowitz bowed out as one would expect: “That’s it. You’re boring me now. Goodbye.”

As dessert was served, Vitale (“pushing 74”) and fellow cast member Randy Doney (72) got up and talked about their lives on the stage. Vitale explained that she came to the Follies after a long hiatus from entertaining as a way of dealing with a divorce following 30 years of marriage. Her attitude about resilience had been made clear during dinner, when she mentioned seeing American Idol contestants crying when they were eliminated.

“Don’t be crying about it,” she said. “Is that the last song you’re going to sing? There’s no crying.” Randy Doney and Suzanne Vitale talk about their careers in entertainment and performing in The Fabulous Palm Springs Follies at Dinner With the Cast.