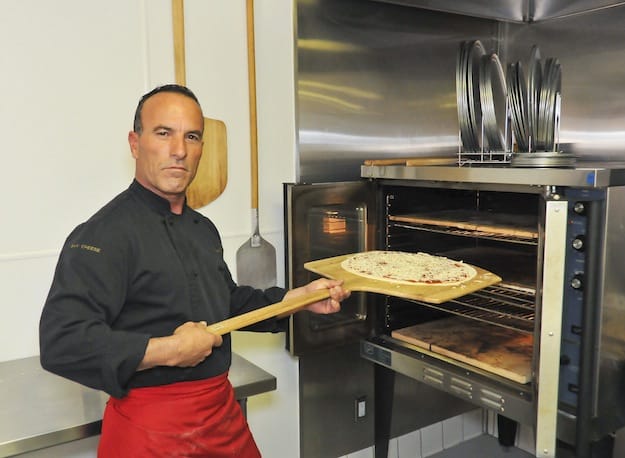 One of the keys to a relationship is understanding boundaries.

As the chef at Mookie’s Pizza Sandwiches and More in North Palm Springs, the kitchen is Giuseppi Panetta’s kingdom. For his partner Stafford Fredericks,  the cash register is his domain.

“Working and living together, you learn to find the balance between the two of you,” Fredericks said. “We work real well together.”

Since opening in October at 2100 N. Palm Canyon Drive, the duo makes sure there are no borders for their customers.

From the green and red décor of Panetta’s homeland in Calabria, Italy, to sauces and dough made from scratch and fresh every day, Mookie’s offers sit-down dining to late-night, grab as you go cravings.

“We try to make customers feel welcome,” Fredericks said. “That’s the real key, like they are part of the family when they walk in the door. That’s true in any business, but especially with food. Food is very personal.”

Mookie’s is situated on Palm Canyon Drive right next to Toucans Tiki Lounge, so it’s hidden some from the drive-by traffic. However, if you’re at the bar or out after bar closings, Mookie’s is open until 3 a.m. on Friday and Saturday nights.

Panetta, who trained as a chef in Italy, doubles as Toucans’ security guy at night and spends his days at Mookie’s creating dishes from traditional pizza to a variety of calzones, lasagna, meatballs and spaghetti.

He’s open to requests. Just ask Tina, a customer who had a calzone named after her because of its unique ingredients of bacon, spinach, ricotta, and mozzarella cheese.

“When people ask if we have something, we try to put it on the menu,” Panetta said. “Lots of people ask for certain items. I can make it for them. If you want to wait 10 minutes, I can give it to you.”

The feedback on Facebook and Yelp has been encouraging, particularly from Stephen S., who said Panetta’s ravioli rivaled his grandmother’s.

“I get the ideas for my recipes from my mind, but there are a few I have from my grandma,” said Panetta, whose resume includes Say Cheese in Los Angeles and the former Enzo’s in downtown Palm Springs. “When I cook, I put my passion into it.”

But when it comes to naming real ingredients, don’t ask Panetta what he puts in his famous sauce. He couldn’t tell you not because of some family secret, but because he rarely makes it the same way twice.

Listen to who the restaurant was named after.