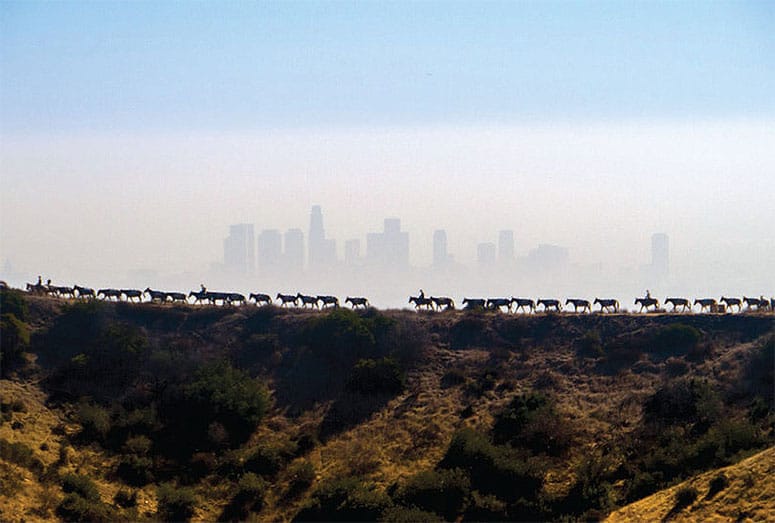 An American farmer finds a way to survive in the shadow of mega-food corporations by holding barn dances and marketing his own pasteurized milk.

A young woman living near the Great Barrier Reef takes on an Australian supermarket chain to raise awareness of the slaughter and consequent decimation of sharks.

A California town fights city hall and insatiable developers to save the last orchard in Orange County’s urban sprawl.

While any of these scenarios would make a great plot for a narrative feature film, they are all real-life situations documented by filmmakers dedicated to the artful expression of truth in storytelling.

From March 26–30, stories like these and more than 100 others light up desert theater screens as the American Documentary Film Festival, or AmDocs, hits the valley for its fourth consecutive year. Remember those documentaries you saw in your ninth-grade history class? These are not those.

Alive with colorful personalities, compelling subject matter, and a vibrant tapestry of storytelling, today’s documentaries are far from monochrome in style or substance. AmDocs, called "one of the world’s coolest documentary film festivals" by Moviemaker Magazine, presents a smorgasbord of American and international films designed to enlighten, entertain, and educate.

"If you give documentaries a chance, you’ll be surprised," says AmDocs founder and director Teddy Grouya, who himself is a screenwriter and filmmaker. "After a few minutes, if it’s a good film, you’ll become engrossed in it." And good is what AmDocs is all about — Grouya makes sure of that. "I travel to a lot of corners of the world searching for the best films that fit and formulate a certain thematic image," he says.

Each year since the festival’s inception in 2012, Grouya has paired films in programs that strike at the heart of current social or political issues. This year, prevalent themes include marriage, parent-child relationships, environment and conservation, mentorship, and equality.

And in 2013, Dionne Warwick attended the screening of Whitney Houston and Her Family: Voices of Love and participated in a Q&A after the film. Additional events peppered the festival throughout its five-day run. For 2015, Grouya is cross-promoting with the Virginia Waring International Piano Competition, which is holding recitals concurrently during the festival. Grouya is selecting some piano-themed films and hopes to enhance the program with live performances from pianists.

New this year to AmDocs is the Robert Drew Vérité Award in recognition of excellence in observational filmmaking, or cinéma vérité, which follows the evolution of subject and story rather than depending solely on static interviews. Drew, who died in 2014, pioneered this intimate, spontaneous style by developing a process in which the camera moved freely among characters, allowing for the necessary mobility to capture real-life events and behind-the-scenes footage. Drew’s most famous work was Primary (1960), in which he documented John. F. Kennedy’s campaign against Hubert Humphrey in Wisconsin.

Grouya, a self-admitted documentary purist, believes it is the greatest form of filmmaking. "I don’t know if there’s anything more inspiring than a true story," he says. "If someone’s able to capture something for real, there’s nothing better."

SCHEDULE:
For the complete schedule of screenings and events, visit www.americandocumentaryfilmfestival.com. For festival coverage, visit www.palmspringslife.com and our social media channels.