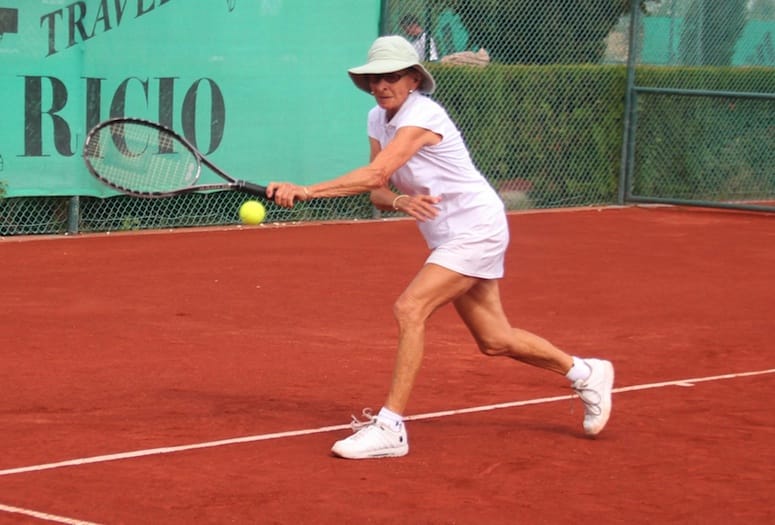 Aging really is a matter of perspective.

Take Dori deVries. She turned 79 in December, but you don't find her shying away from soon becoming an octogenarian. Graydon Nichols hits 91 in time for the tournament.

deVries, who splits time between her homes in Rancho Mirage and Reno, Nev., began playing tennis when she was nearing 40. The tournament has given her reason to look at aging as an opportunity.

“In tennis, it’s all about the camaraderie and competition but people need to see the hopes and happiness it brings to you,” said deVries, who competes internationally on all four surfaces year 'round. “When you see an older person out there fighting like a teenager, moving, being smarter, there's a real spirit there.

“Now that I'm moving into the 80s, it's a new beginning and some of the 80s (players) in some ways are very strong," she adds. “It's really good tennis. Really, they keep getting better.”

deVries will be one of more than 750 players to compete in age groups starting at 35-plus to 90-plus for men's and women's singles, doubles, and mixed doubles. National champions will be crowned and some of the best players in the nation will also compete for Super Category II status (one step below national champion level) at the main venue. John Powless is currently ranked No. 1 in the 80s age category by the USTA.

All events are free to the public with a complete listing of start times and division on the event website. The Mixed 50s, Mixed 60s and Mixed 70s events are now USTA Category I with gold, silver, and bronze balls awarded.

Last year’s event brought participants from 28 states and a handful of international players to make it a global competition and the largest senior event in the world, according to the website and tournament directors.

“The tournament is very well run, it's in Palm Springs and the Coachella Valley at the end of January, so people make a vacation out of it,” says Ed Trost, who shares tournament director honors with Jayne Robertson. “They come for tennis — this is the final stop of what players call the desert circuit (other events were held at Monterey C.C., Plaza Racquet Club and Palm Springs Tennis Club)– and they stay or they come back year after year. Players feel like they’re welcome here and there's a laid-back atmosphere.”

John Powless returns on a regular basis. He's also one of the best in the world, currently ranked No. 1 in the 80s by the USTA. The former University of Wisconsin head tennis coach who also coached the Badgers' men's basketball team, Powless once held the No. 1 ranking in two age divisions at the same time and continues his high level of play despite having both knees replaced.

Graydon Nichols will mark his 91st birthday just prior to the tournament, and the part-time Rancho Mirage resident is another longtime participant on the super senior circuit.

“The (entrants) draws are pretty small (in the 90s) but it still brings out the competitive juices,” said Nichols, who first played competitively in high school. “You don't just want to sit in a chair… do something fun and interact. Everything you hear about is to get out and move, do something.”